Which Breeders' Cup Juvenile starters will qualify to the Kentucky Derby?

The $2 million Breeders’ Cup Juvenile (G1) ranks as North America’s most prestigious race for 2-year-olds. It’s also an important steppingstone toward the Kentucky Derby, taking place six months before the “Run for the Roses” and awarding 20 qualification points to the winner.

The 2020 Breeders’ Cup Juvenile was run on Nov. 6, with 14 talented youngsters traversing 1 1/16 miles at Keeneland. The question is, how many of the Juvenile starters will wind up competing in the 2021 Kentucky Derby? The number can vary widely from year to year; the 2013 Derby lacked even a single representative from the Juvenile, but the 2012 Derby contained no fewer than nine Juvenile veterans.

Chances are, the 2020 Breeders’ Cup Juvenile will fall somewhere in between from a productivity standpoint. Let’s review seven of the most promising starters from the Juvenile’s deep and competitive field, analyzing where they stand heading into winter:

Essential Quality (1st): Previously victorious in the Breeders’ Futurity (G1), Essential Quality has already accumulated 30 qualification points on the Road to the Kentucky Derby. Winning the Eclipse Award as champion 2-year-old male should be a formality for Essential Quality, and one more decent effort during the winter will lock up a spot in the Derby starting gate.

Hot Rod Charlie (2nd): The Juvenile runner-up has improved by leaps and bounds since adding blinkers and stretching out around two turns on dirt. Conditioned by two-time Kentucky Derby-winning trainer Doug O’Neill, Hot Rod Charlie was an unheralded 94-1 longshot in the Juvenile, but you can bet he won’t be so overlooked this winter. The son of 2013 Preakness (G1) winner Oxbow already has eight Road to the Kentucky Derby qualification points under his belt and is clearly progressing in the right direction.
Keepmeinmind (3rd): A pure deep closer, Keepmeinmind capitalized on a fast pace to rally and finish third in the Juvenile, beaten just two lengths at odds of 30-1. But his strong effort was hardly a fluke—Keepmeinmind had previously finished second behind Essential Quality in the Breeders’ Futurity (G1), giving him a total of eight points on the Road to the Kentucky Derby leaderboard.
Jackie’s Warrior (4th): Although Jackie’s Warrior was beaten as a short-priced favorite in the Juvenile, you can argue the speedy son of Maclean’s Music moved too soon into a hot pace, leaving him tired for the final furlong. Conditioned by Hall of Fame trainer Steve Asmussen, Jackie’s Warrior entered the Juvenile off consecutive victories in the Saratoga Special (G2), Hopeful (G1), and Champagne (G1), so we know he has serious talent. With 12 qualification points under his belt, he’ll head into winter ranked second on the leaderboard.
King Fury (7th): Never threatened for victory in the Juvenile, racing evenly from mid-pack to finish seventh, but he was also running back just 12 days after scoring a gritty victory in the Street Sense S. at Churchill Downs. A beautifully-bred son of Curlin out of the Grade 1-winning mare Taris, King Fury is bred to improve with maturity and should make plenty of noise this winter.
Classier (8th): An impressive debut winner just 13 days before the Juvenile, Classier stepped up significantly in class and distance at Keeneland, two factors that surely contributed to his eighth-place finish. A son of 2003 Belmont Stakes (G1) winner Empire Maker out of a mare by 2006 Preakness (G1) winner Bernardini, Classier has the pedigree to improve with time, experience, and classic distances, so he still warrants watching through the winter. You know six-time Kentucky Derby-winning trainer Bob Baffert will get the best out of this $775,000 yearling purchase.
Sittin On Go (9th): Although Sittin On Go failed to fire in the Juvenile, racing near the back of the pack throughout, he’d previously shown an affinity for Churchill Downs when rallying to victory in the Iroquois (G3) on the Road to the Kentucky Derby. With 10 qualification points to his credit, Sittin On Go is already on the leaderboard, and trainer Dale Romans knows how to get a horse to the Derby—he’s saddled 10 starters since 2006. 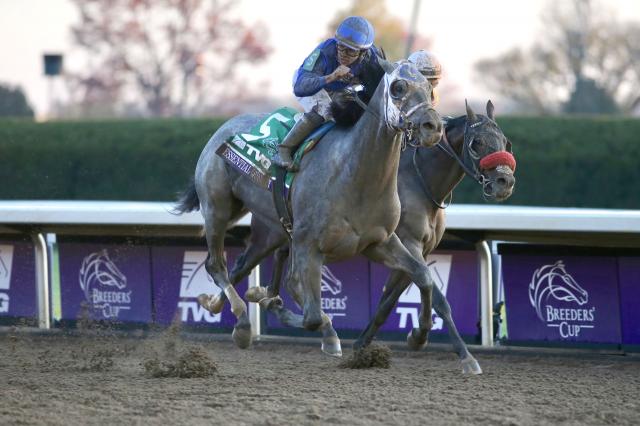