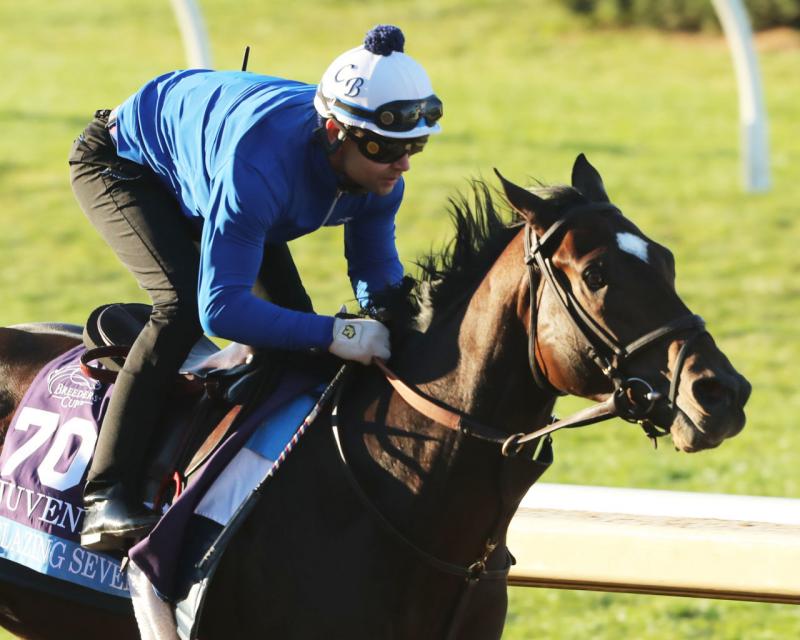 Blazing Sevens is one of the headliners from the first crop of champion Good Magic (Photo by Coady Photography)
Runner-up to Triple Crown champion Justify in the 2018 Kentucky Derby (G1), Good Magic has several well-credentialed sons from his first crop who can bid for the roses that eluded him.
Blazing Sevens became his first Grade 1 winner in the Champagne (G1). Curly Jack captured the Iroquois (G3) as the opener on the Road to the Kentucky Derby, and Dubyuhnell threw his hat in the ring by taking the Remsen (G2).
Here are 12 pedigree fun facts to know about Blazing Sevens, who like Good Magic is trained by Chad Brown:
1. Good Magic broke his maiden in the 2017 Breeders’ Cup Juvenile (G1). That’s a measure of how highly the $1 million yearling was regarded by his connections. After a promising second on debut at Saratoga, Good Magic took a class hike for the Champagne and again finished a rattling runner-up. The Breeders’ Cup at Del Mar offered him an opportunity to stretch out to two turns, and Good Magic delivered in grand style, upsetting heavily favored Bolt d’Oro (now the sire of Instant Coffee).
2. Good Magic challenged Justify in the first two jewels of the Triple Crown. After winning his final prep in the Blue Grass (G2), Good Magic took a run at Justify in the Derby but couldn’t catch the speedy favorite. A tactical switcheroo in the Preakness (G1) saw Good Magic uncharacteristically pressing Justify early. It didn’t help Good Magic, who ultimately dropped to fourth, and Justify too had to dig deep to hold on at a fog-shrouded Pimlico.
3. After Justify’s retirement, Good Magic briefly asserted himself as the top three-year-old still in training. He drove to a good-looking victory in the Haskell (G1) and entered the Travers (G1) as the favorite, only to wind up ninth at Saratoga. He exited with an illness and later retired to stud.
4. Good Magic’s sire, Curlin, and broodmare sire, Hard Spun, were rivals in the 2007 Triple Crown. Curlin wasn’t quite as far along the developmental curve in the Kentucky Derby, where he was third to Street Sense and Hard Spun. But Curlin turned the tables in the Preakness and again beat them both in the Breeders’ Cup Classic (G1) to clinch Horse of the Year honors. Curlin’s most iconic moment of that classic season, though, might be his near-miss to champion filly Rags to Riches in the Belmont (G1). 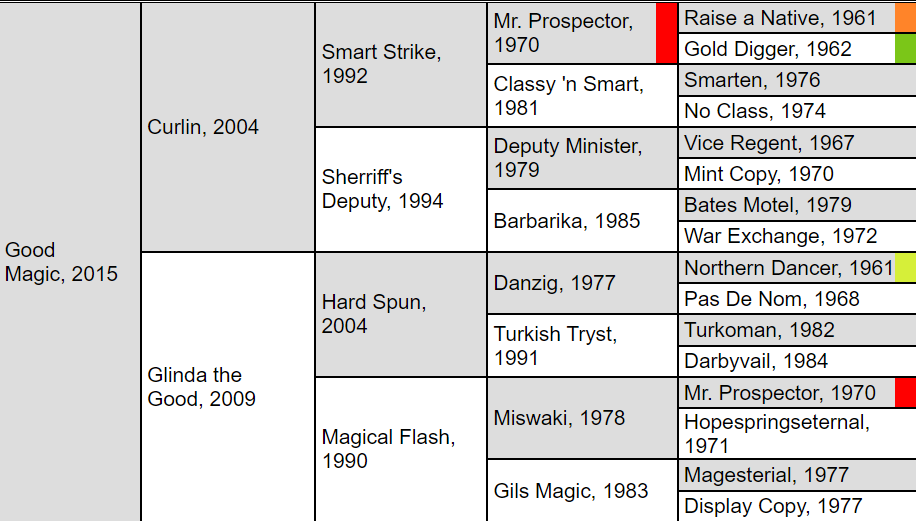 5. Curlin amassed $10.5 million in earnings, a North American record upon his retirement in 2008, and repeated as Horse of the Year. He compiled a Hall of Fame resume by adding the Dubai World Cup (G1), Stephen Foster (G1), Woodward (G1), and another Jockey Club Gold Cup (G1) to his trophy cabinet.

6. A grandson of Mr. Prospector via Smart Strike, Curlin has helped to establish this branch of the proliferating sire line. Curlin’s son Keen Ice famously shocked American Pharoah in the 2015 Travers. Keen Ice pulled another huge upset by siring Rich Strike, the 80-1 surprise in the 2022 Kentucky Derby. Curlin got a Belmont hero in his first crop courtesy of Palace Malice (2013). In 2016, Curlin joined the club of father-son Preakness winners when Exaggerator landed the middle jewel, after placing second in the Derby. Curlin had a banner day at the 2022 Breeders’ Cup, siring three winners over a range of distances – Elite Power in the Sprint (G1), Cody’s Wish in the Dirt Mile (G1), and champion Malathaat in the Distaff (G1). He now has a total of five, including Good Magic and champion Vino Rosso in the 2019 Classic.

7. Good Magic’s dam, multiple stakes winner Glinda the Good, also placed in a trio of stakes including the 2011 Pocahontas (G2). Her runner-up finish in the 2012 Sunland Park Oaks attracts attention too, since the victorious Princess Arabella is now the granddam of Kentucky Oaks (G1) contender Hoosier Philly.

8. Blazing Sevens is out of Trophy Girl, by Warrior’s Reward. Himself a son of the outstanding runner and sire Medaglia d’Oro, Warrior’s Reward placed in a few route stakes (notably the 2009 Jim Dandy [G2]) before getting his nose in front in the seven-furlong Carter H. (G1) in 2010. 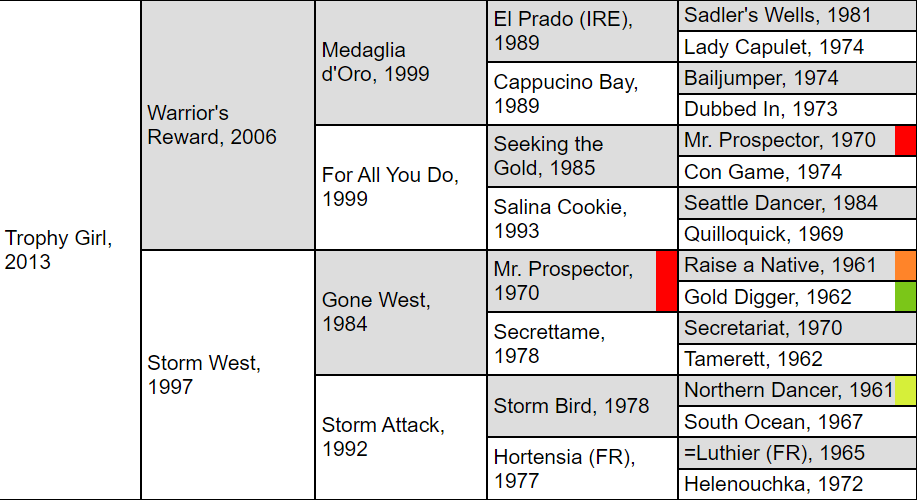 9. Mr. Prospector appears four times within Blazing Sevens’s five-cross pedigree. Both of his parents have duplications of “Mr. P.” Good Magic counts him as a direct male-line ancestor as well as one on his dam’s side, with Glinda the Good being out of a mare by the Mr. Prospector stallion Miswaki. Two other powerfully influential sons of Mr. P factor in Trophy Girl – Seeking the Gold, the broodmare sire of Warrior’s Reward, and Gone West, sire of Trophy Girl’s own dam, Storm West.

10. Storm West produced three stakes performers, led by King David, the 28-1 upsetter of the 2012 Jamaica (G1) on turf. Her other foals to gain black-type were primarily sprinters. Bertsgoldenmissile won the Gate Dancer S. at Louisiana Downs as a juvenile, placed in three stakes, and finished fourth in the 2009 Smarty Jones S. at Oaklawn. Heureux, originally campaigned in Great Britain, ended up in Norway where he was a close second in the 2010 Polar Cup (G3).
11. Blazing Sevens’s third dam, Storm Attack, is by the renowned Storm Bird. A Canadian-bred son of Northern Dancer, Storm Bird became an unbeaten champion two-year-old in England and Ireland. He exerts an enduring legacy, especially through his son Storm Cat.
12. Blazing Sevens’s fourth dam, French-bred Hortensia, starred in the 1980 Prix de l’Opera (G2). By leading French sire Luthier, Hortensia is out of a mare by the last English Triple Crown winner, Nijinsky II. Hortensia is responsible for multiple Group 3 scorer Glacial Storm, who placed in both the Epsom Derby (G1) and Irish Derby (G1) in 1988. 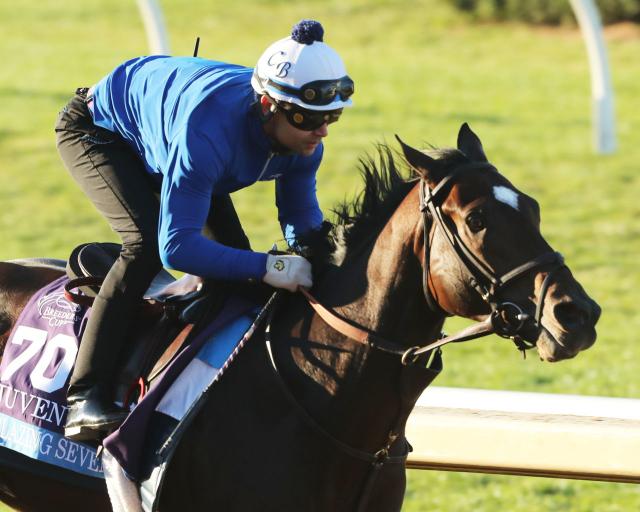