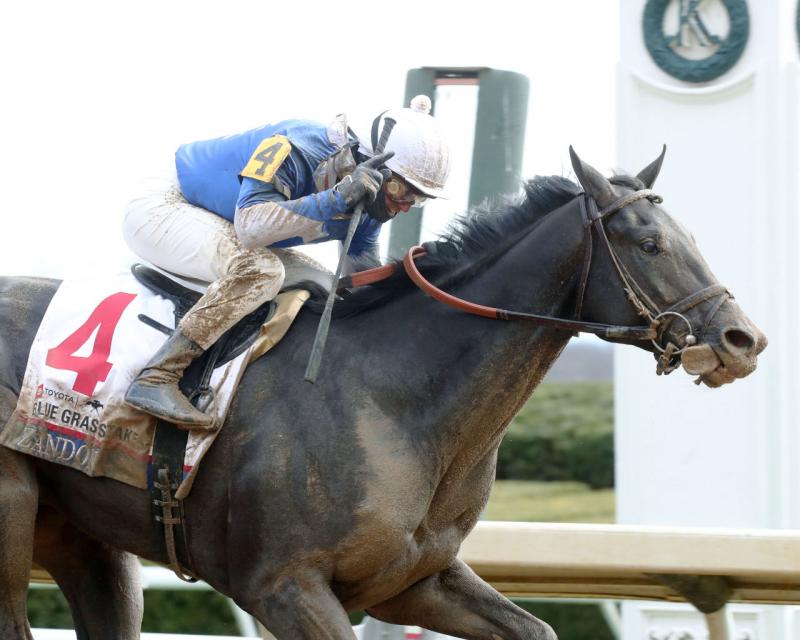 Zandon is from the sire line of Triple Crown legend Seattle Slew (Coady Photography)
Judging by his breakout performance in the Blue Grass (G1), Zandon could be poised to succeed in the Kentucky Derby (G1) that eluded sire Upstart, broodmare sire Creative Cause, and second dam’s sire Indian Charlie. The depth of his female line bolsters those hopes, since he hails from the family of two Derby winners who tried for Triple Crown sweeps.
Here are Zandon’s pedigree fun facts:
1. Upstart was a contender on the 2015 Kentucky Derby trail.
After placing in the 2014 Champagne (G1) and Breeders’ Cup Juvenile (G1), Upstart put it all together at Gulfstream Park over the winter to emerge as a major Derby contender. He romped in the Holy Bull (G2) and finished first in the Fountain of Youth (G2), only to be demoted to second for interference, and took the runner-up spot in the Florida Derby (G1). But Upstart failed to do himself justice in the Run for the Roses, eased home in 18th behind Triple Crown sweeper American Pharoah.
Returning in the summer, Upstart was third in the Haskell (G1) and fourth in the Travers (G1). He added one more victory to his resume at four, in the 2016 Razorback H. (G3) at Oaklawn Park, and concluded his career with thirds to Frosted in the Metropolitan H. (G1) and Whitney (G1).
2. Upstart has a chance of a rare Kentucky Oaks/Derby double as a sire.
Off to a quick start at stud, Upstart sired two prominent colts in his first crop, multiple Grade 1-placed Reinvestment Risk and last year’s Ohio Derby (G3) winner Masqueparade. His second crop, though, could put him in the history books. Alongside Zandon’s going for the Derby, Upstart has unbeaten filly Kathleen O. in the Kentucky Oaks (G1). Both are leading chances who could be vying for favoritism in their respective races.
If Upstart can pull off the Oaks/Derby double, he would join an exclusive club. Only four stallions in history have managed to accomplish it in the same year – King Alfonso in 1885 (Lizzie Dwyer and Joe Cotton), McGee in 1918 (Viva America and the great gelding Exterminator), Bull Lea in 1952 (Real Delight in the Oaks and Hill Gail in the Derby), and Native Dancer in 1966 (Native Street and Kauai King).
3. Upstart’s sire, Flatter, is a scion of the Seattle Slew line.
Upstart is by Flatter, a representative of the sire line of 1977 Triple Crown legend Seattle Slew via his Hall of Fame son A.P. Indy. Flatter has an exceptional pedigree on his dam’s side as well. He is out of Praise, a daughter of Mr. Prospector and Grade 2 victress Wild Applause, who is herself a Northern Dancer half-sister to 1993 Kentucky Derby and Travers star Sea Hero.
Flatter is a full brother to Grade 2 winner and multiple Grade 1-placed Congrats, himself a solid sire. If Flatter had been able to have a longer career on the racetrack, he probably would have earned graded laurels. The winner of four of six starts, Flatter finished third to Perfect Drift in his only stakes attempt, the 2003 Washington Park H. (G2), in what turned out to be his swan song.
Flatter’s top progeny include 2017 Travers-winning champion West Coast, $3.6 million-earner Flat Out, millionaire Taris, last year’s Kentucky Oaks runner-up Search Results, and Canadian champ Avie’s Flatter, who placed in all three jewels of his country’s Triple Crown in 2019. Now Flatter has also emerged as the broodmare sire of Taiba, a sudden factor on the trail after taking the Santa Anita Derby (G1). 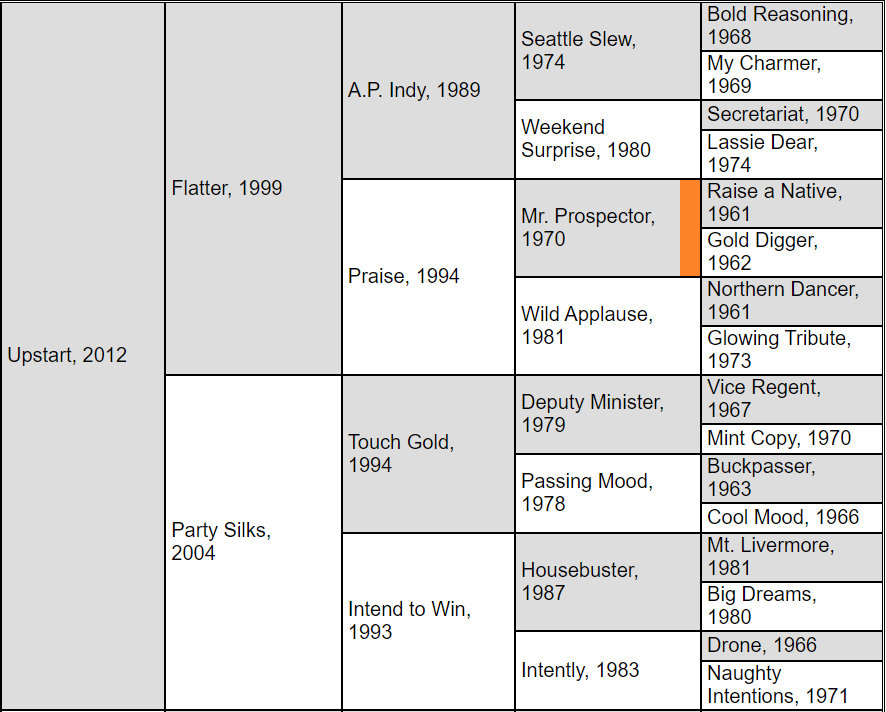 4. Both of Upstart’s grandsires are Belmont winners.

Upstart’s dam, Party Silks, is by Touch Gold, who also factors as the broodmare sire of Belmont near-misser Commissioner (2014) and third-placer Hofburg (2018). Interestingly, both are bred along a similar pattern to Upstart, with Commissioner by A.P. Indy and Hofburg by Tapit. The cross of A.P. Indy over Touch Gold’s sire, Deputy Minister, has also surfaced in the third jewel via Rags to Riches, the history-making 2007 Belmont heroine, and 2015 runner-up Frosted (by Tapit).

5. Zandon’s broodmare sire, Creative Cause, was on the 2012 Derby trail.

Zandon’s dam, Memories Prevail, is from the first crop of Creative Cause, who was among the leaders of his generation at both two and three. During his 2011 campaign, Creative Cause captured the Norfolk (now known as the American Pharoah) (G1) and Best Pal (G2), and he placed in the Del Mar Futurity (G1) and Breeders’ Cup Juvenile.

Adding the San Felipe (G2) to his resume in 2012, he missed by just a nose to I’ll Have Another in the Santa Anita Derby (G1). But Creative Cause didn’t get close to that same rival when fifth in the Kentucky Derby and third in the Preakness (G1).

Creative Cause’s principal runners include Grade 1 scorer and $2 million-earner Pavel; My Boy Jack, winner of the 2018 Southwest (G3) and Lexington (G3) and fifth in the Kentucky Derby; and Grade 2 turfiste Significant Form, a close relative of Zandon’s dam.

6. Creative Cause is a full brother to 2016 Belmont near-misser Destin.

Creative Cause’s full brother Destin, also a gray, rolled onto the 2016 Derby trail at Tampa Bay Downs. Turning the Sam F. Davis (G3)/Tampa Bay Derby (G2) double, Destin was only sixth in the Kentucky Derby, but bounced back to come within a nose of landing the Belmont.

Creative Cause and Destin are by the “Iron Horse” Giant’s Causeway and out of Grade 1-winning millionaire Dream of Summer. Their parents furnished yet another high-profile full sibling, this time a bay filly – Vexatious. Fourth in the 2017 Kentucky Oaks, Vexatious would go on to stun champion Midnight Bisou in the 2020 Personal Ensign (G1).

Zandon’s granddam is Incarnate Memories, by the brilliant Indian Charlie. A smashing winner of his first four starts, capped by the 1998 Santa Anita Derby, Indian Charlie ranked as the 2.70-1 favorite in the Kentucky Derby, but he ended up third to Real Quiet.

Indian Charlie went on to become a successful sire, with such champions as Uncle Mo, Indian Blessing, and Fleet Indian. Uncle Mo has taken up the mantle himself, already emerging as a sire of sires. He has Mo Donegal in this year’s Derby as well as two contending grandsons, Slow Down Andy (by Uncle Mo’s 2016 Derby champ Nyquist) and Un Ojo (by Laoban).

Zandon’s dam, Memories Prevail, is inbred to French classic-winning miler Siberian Express. The paternal grandsire of Indian Charlie, Siberian Express also makes an appearance on the bottom half of Creative Cause’s pedigree. Siberian Express is a son of French star Caro, the vector of his gray coat to such standouts as his Kentucky Derby-winning daughter, Winning Colors (1988).

Incarnate Memories is out of Witness Post, who is closely inbred to Mr. Prospector as a daughter of Gone West and a Fappiano mare. Both Gone West and Fappiano are influential sons of “Mr. P.” Gone West has left a global legacy, including Elusive Quality and Speightstown, while Fappiano has carved out his own branch flowering in such descendants as Candy Ride and American Pharoah.

Zandon’s seventh dam in the direct female line, Your Hostess, is the dam of T.V. Commercial, who was elevated to third in the 1968 Derby. One year later, a grandson of Your Hostess, Majestic Prince, won the 1969 edition. Her tribe achieved Derby glory again in 1998, with the aforementioned Real Quiet, who descended from a full sister to Majestic Prince.

Both Real Quiet and Majestic Prince won the Preakness as well, setting up Triple Crown bids that ultimately failed in the Belmont. Ironically, both were denied by archrivals who had finished second in the first two jewels. Real Quiet came agonizingly close, only to be nailed on the wire by Victory Gallop in an epic finish. Majestic Prince entered his Belmont unbeaten, but with questions surrounding his physical condition. He succumbed to fellow Hall of Famer Arts and Letters and never raced again.

10. Your Hostess is a full sister to the sire of all-time great Kelso.

Your Hostess’s older full brother, Your Host, is best remembered for siring Hall of Famer Kelso. One of the all-time great geldings, Kelso was honored as Horse of the Year for an incredible five consecutive seasons (1960-64).

But Your Host has a place in Kentucky Derby history too, as the beaten favorite in the 1950 running. Sent off at odds of 8-5 after winning the Santa Anita Derby, Your Host tired to ninth.

11. Your Hostess is closely related to another influential matron, Flower Bowl.

Your Hostess is by *Alibhai, a son of 1933 Epsom Derby champion Hyperion, who became a top sire despite never having made it to the races himself. Your Hostess is out of *Boudoir II, runner-up in the 1941 Irish 1000 Guineas and herself the daughter of record-setting 1936 Epsom Derby star *Mahmoud.

That makes Your Hostess a close relative of Flower Bowl, the winner of the 1956 Delaware H. and an influential broodmare herself. Also by *Alibhai, Flower Bowl is out of Your Hostess’s half-sister Flower Bed (the ancestress of Hall of Famer Gallant Bloom). Flower Bowl became the dam of Graustark, the 1966 Derby favorite until his career was cut short by injury, and his full brother His Majesty, both successful sires, as well as two-time champion filly Bowl of Flowers.

12. The family foundress is a mid-19th century British classic winner.

This is the family numbered 4-d, founded by Manganese, heroine of the 1000 Guineas in 1856. Her daughter Mineral produced two British classic winners, Wenlock (1872 St Leger) and Kisber (1876 Epsom Derby).

Mineral’s son Schwindler fought out the finish of the 1875 German Derby, resulting in a dead-heat according to some sources, but Hamburg Racecourse notes that the filly Palmyra was ultimately declared the winner. 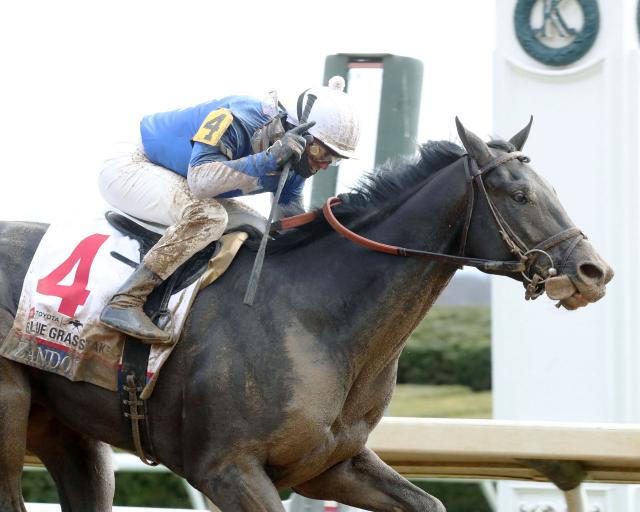