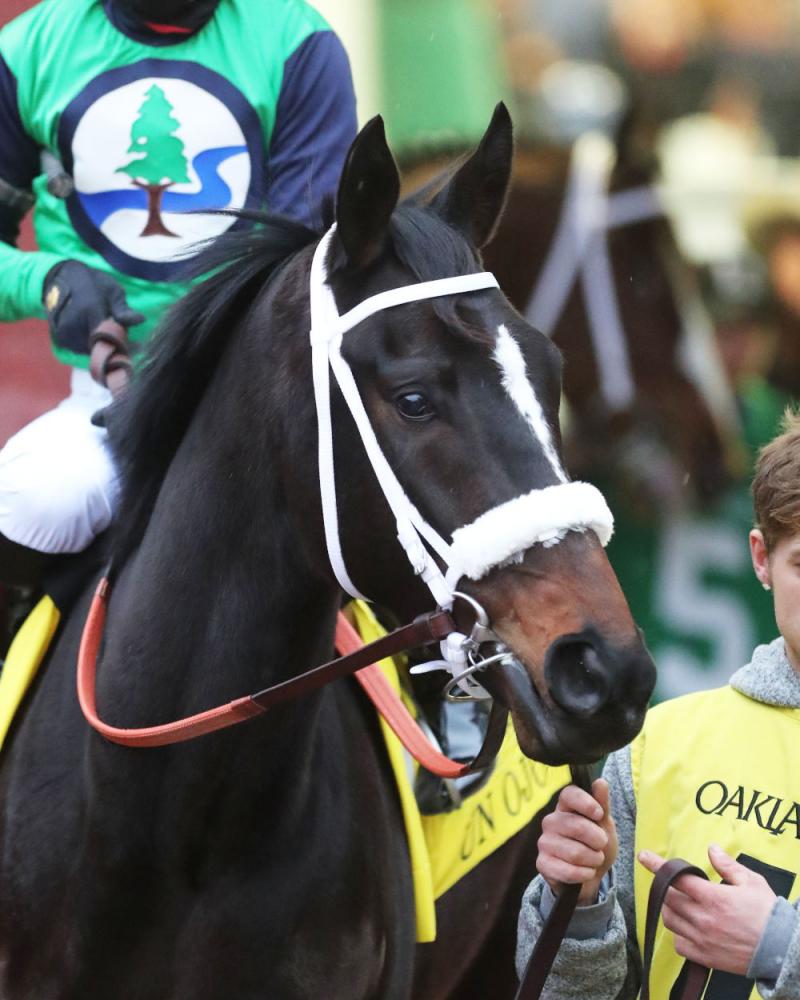 You might imagine that a one-eyed gelding who pulled a 75-1 upset in a major race on the Road to the Kentucky Derby wouldn’t have much of a pedigree. But Un Ojo, the surprise package in the $1 million Rebel (G2), has fine bloodlines all around.

Here are his pedigree fun facts:
1. Sire Laoban broke his maiden in the Jim Dandy (G2).
Although beaten in his first two races, Laoban was regarded so highly that his connections pitched him onto the 2016 Triple Crown trail as a maiden. Third in the Sham (G3), second in the Gotham (G3), and fourth in the Blue Grass (G1), Laoban even tried the Preakness (G1), where he wound up sixth behind Exaggerator. But he put it all together to wire the Jim Dandy (G2) as a 27-1 shot at Saratoga. He raced only once more, being eased in Arrogate’s record-setting Travers (G1), and ended up retiring late that year.
2. Laoban entered stud in New York but moved to Kentucky.
Laoban got off to a fast start at stud in New York, ranking as the Empire State’s leading freshman sire in 2020. His headliners were Alcibiades (G1) heroine Simply Ravishing and Kentucky Jockey Club (G2) winner Keepmeinmind, who also placed in the Breeders’ Futurity (G1) and Breeders’ Cup Juvenile (G1). Laoban was thus in demand, and accordingly he moved to WinStar in Kentucky for 2021. Sadly, Laoban died late last May. In addition to Un Ojo, he is represented by another stakes-winning Triple Crown nominee in Barese.
3. Laoban was a member of Uncle Mo’s stellar first crop.
Laoban’s sire, champion Uncle Mo, was an immediate hit with his first crop. The unbeaten Breeders’ Cup Juvenile winner of 2010, Uncle Mo had his son Nyquist follow in his hoofsteps by clinching a championship in the 2015 Breeders’ Cup Juvenile. Moreover, Nyquist outstripped his sire by turning the rare Juvenile/Kentucky Derby (G1) double. Now a successful sire in his own right, Nyquist has Slow Down Andy and promising debut winner Nitrous Channel on the 2022 trail. More details on the Uncle Mo sire line can be found in the pedigree fun facts for Slow Down Andy.
Other first-crop sons of Uncle Mo include Wood Memorial (G1) scorer Outwork and Lecomte (G3) victor Mo Tom, both unplaced behind Nyquist in that year’s Derby. Uncle Mo has continued his momentum through his subsequent crops, and he has a high-profile contender again this year in Remsen (G2) hero Mo Donegal. 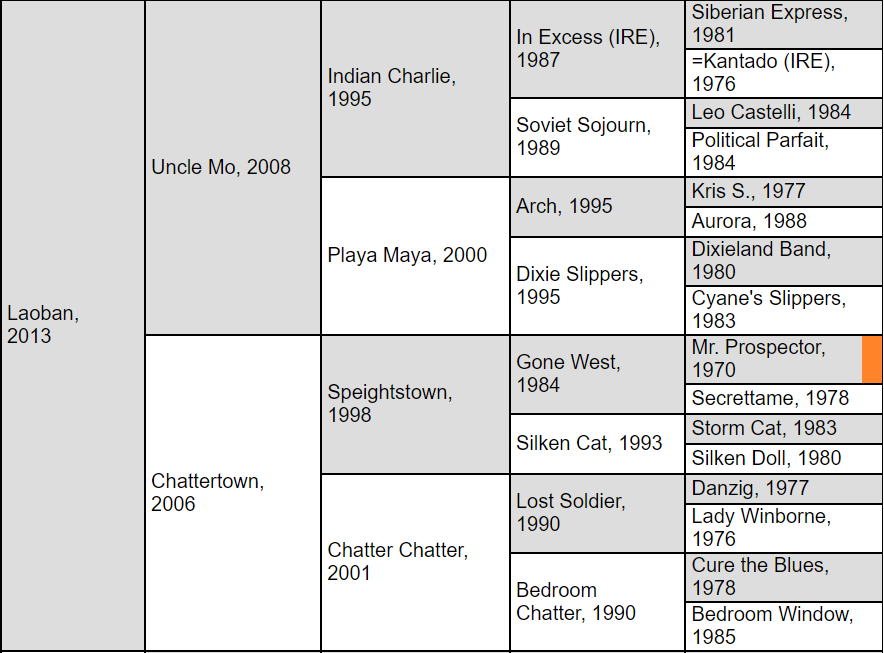 4. Laoban’s dam is closely related to I’m a Chatterbox.

Laoban was produced by the stakes-placed Chattertown, a very close relation of multiple Grade 1 winner and $2.3 million-earner I’m a Chatterbox. Both are by champion sprinter and top sire Speightstown, and their dams are full sisters. Chattertown is out of multiple Florida-bred stakes vixen Chatter Chatter, and I’m a Chatterbox is out of multiple stakes-placed Chit Chatter, both mares by the well-bred Danzig stallion Lost Soldier.

Un Ojo’s dam, Risk a Chance, was twice stakes-placed in New York-bred company, but her pedigree is redolent of Kentucky. She is by Hall of Famer A.P. Indy, whose sire and broodmare sire are Triple Crown legends Seattle Slew and Secretariat. A.P. Indy has left an indelible mark on the breed through such sons as Pulpit (sire of Tapit), Bernardini, Mineshaft, and now hopefully Honor Code picking up the baton. 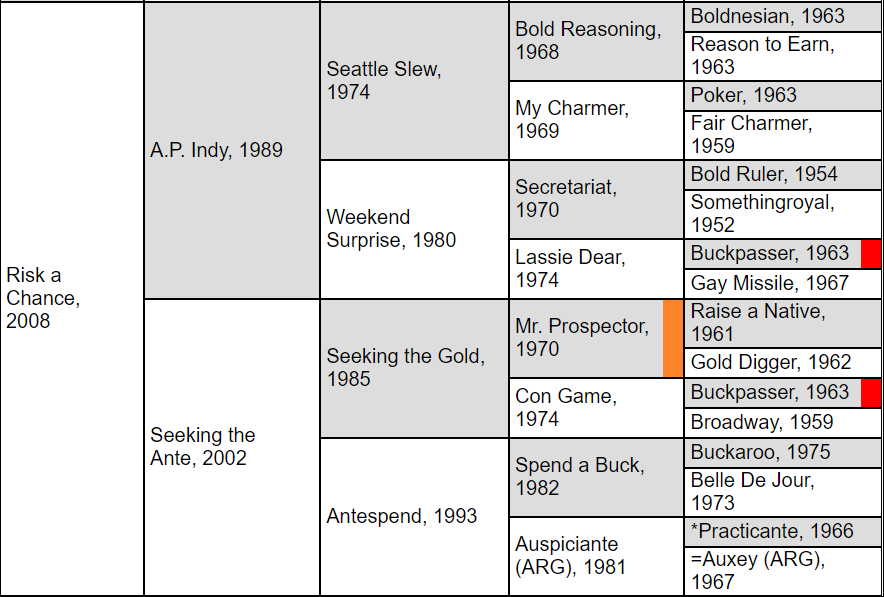 6. Risk a Chance is closely related to Friends Lake.
Risk a Chance’s dam, Grade 2 winner Seeking the Ante, is herself a half to Friends Lake, the 2004 Florida Derby (G1) victor who was 15th behind Smarty Jones in the Run for the Roses. Because Friends Lake is by A.P. Indy, that makes him a three-quarter brother to Risk a Chance.
Risk a Chance is also a three-quarter sister to multiple New York-bred stakes winner Mineralogist. Both are out of Seeking the Ante, but Mineralogist is by A.P. Indy’s son Mineshaft. Mineralogist is likewise a stakes producer, as the dam of New York veteran Can You Diggit.
7. Un Ojo’s third dam is millionaire Antespend, by Spend a Buck.
Seeking the Ante and Friends Lake are both out of millionaire Antespend. A daughter of 1985 Kentucky Derby conqueror and Horse of the Year Spend a Buck, Antespend captured Grade 1s on both dirt and turf. She wired the 1996 Las Virgenes (G1) and Santa Anita Oaks (G1) over Cara Rafaela (the dam of Bernardini) as well as the Del Mar Oaks (G1).
8. The great Buckpasser is a recurring presence.
Hall of Famer and significant sire Buckpasser is a leitmotif on Un Ojo’s maternal side, appearing three times in Risk a Chance’s ancestry. While A.P. Indy has Buckpasser in the bottom half of his pedigree, Seeking the Ante is herself inbred to the all-time great. Her sire, the influential Mr. Prospector stallion Seeking the Gold, is out of a Buckpasser mare. Her aforementioned broodmare sire, Spend a Buck, is by Buckpasser’s son Buckaroo.
9. Un Ojo’s fourth dam is high-class Argentine import Auspiciante.
Antespend was produced by Auspiciante, an Argentine Group 2 winner who placed in four Group 1 events in her homeland. After arriving in the United States, however, Auspiciante broke through with top-level wins in the 1986 Ramona H. (G1) and Matriarch (G1). Her full brother, Auxiliante, likewise excelled abroad when landing the 1979 Premio Vittorio di Capua (G2) in Italy.
Their sire, *Practicante, was Argentina’s Horse of the Year by virtue of his victories in the prestigious Gran Premio Carlos Pellegrini, Gran Premio Jockey Club, and Gran Premio Nacional in 1969. After a European campaign, he made his way stateside and scored in the 1972 San Luis Obispo (in course-record time at Santa Anita) and the San Juan Capistrano.
Auspiciante’s maternal line, which traces to the 12-d family, has been ensconced in Argentina since the late 19th century. 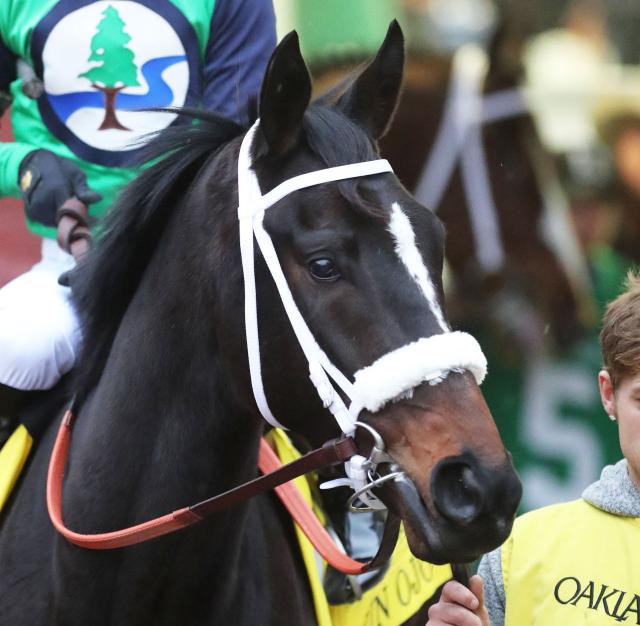