Audible turns it up in Florida Derby win 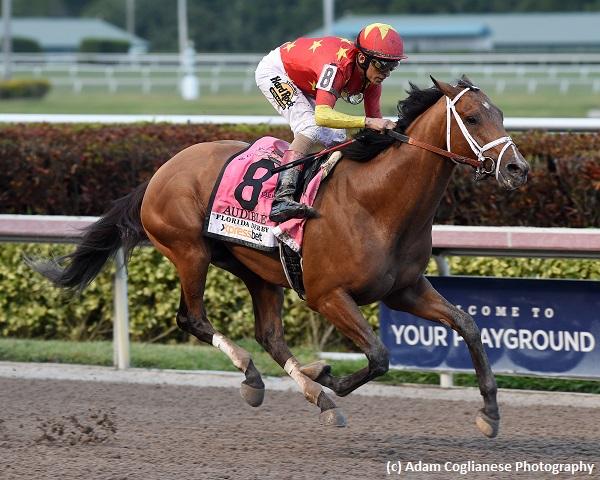 With an impressive three-length victory, Audible looked the part of a serious Kentucky Derby contender in the $1 million Florida Derby (G1) at Gulfstream Park. The Todd Pletcher-trained colt extended his win streak to four and John Velazquez was up for owners China Horse Racing Club, Head of Plains Partners, Starlight Racing and WinStar Farm.

As a major final prep race in the Road to the Kentucky Derby series, the 1 1/8-mile Florida Derby was worth a total of 170 points to the top four finishers (100-40-20-10 scale) and Audible needed the points after netting 10 for a 5 ½-length romp in his stakes debut, the February 3 Holy Bull (G2) at Gulfstream. He returned in strong form from the eight-week freshening.

The son of Into Mischief left the starting gate as the 8-5 favorite among nine runners and rated well off the pace as Promises Fulfilled and Strike Power dueled through wicked opening splits in :21.95 and :46.37. Audible advanced into contention on the far turn, ranging up four wide to be only two lengths back after three-quarters in 1:11.68 as the early leaders began to throw in the towel, and the bay colt blew past Mississippi to take a clear lead into upper stretch.

Hofburg, a Bill Mott-trained Tapit colt exiting a March 3 maiden win, rallied to be a clear second while never seriously threatening the winner and the improving 3-year-old likely stamped his Kentucky Derby ticket in the third career start. It was a 7 ¾-length margin back to Mississippi, who was also making his first stakes appearance. Catholic Boy, the 5-2 second choice, came next in fourth and was followed by Millionaire Runner, Tip Sheet, Storm Runner, Strike Power and Promises Fulfilled.

Bred in New York by Oak Bluff Stables, Audible is out of the mare Blue Devil Bel, a daughter of Gilded Time, the champion 2-year-old male of 1992 and close third-place finisher in the 1993 Breeders’ Cup Sprint (G1). Blue Devil Bel is a half-sister to multiple New York-bred stakes winner Akilina, the dam of 2016 Jim Dandy (G2) runner-up Governor Malibu.

After selling for $175,000 as a yearling, Audible was purchased by his connections for $500,000 at the 2017 Fasig-Tipton Florida March sale. He finished third when making his first outing in a 6 ½-furling restricted maiden at Belmont Park last September and stretched out to a one-turn mile to break his maiden by a 1 ¾-length margin at Aqueduct in mid-November.

Audible won an off-the-turf allowance at Aqueduct by 9 ¾ lengths in early December and came back two months later to crush rivals in his stakes bow, generating a 105 BRIS Speed rating for his Holy Bull score.

Todd Pletcher (Audible): “The race unfolded with the pace that we were hoping for and we wanted to get some position into the first turn, which he was able to do beautifully. Just watching the race I was a little concerned at the five-eighths pole because he started to drop back a little bit, but I could tell Johnny wasn’t panicked. He kind of grabbed him up and sometime midway down the backstretch he started to pick up horses and I started to feel better and better. You could tell the pace up front had developed pretty swiftly so you felt like those horses were going to start to come back at some stage.”

John Velazquez (Audible, 1st): “It played out the way I thought it was going to be. I talked to Todd and we thought there were the two horses with speed and Julien [Leparoux]’s horse [Mississippi] who was wearing blinkers for the first time so we figured he’d probably come out running. I wanted to come out running and I had to use my horse to get position on the first turn. I was in the spot I wanted to be in going into the backstretch and after that I was pretty happy. The only thing that concerned me was when he got to the backstretch he started backing up a little bit. I thought I was overdoing it so I had to give him a little chance on the backstretch to regroup again and once he got his stride back together and when he started moving again on the backstretch I was very happy with the way he was doing  it.

“Once he got to the horses on the lead I just tried to keep him busy down the lane and he kicked pretty good. I didn’t ride him last time but he way he ran today he was definitely impressive. [The distance] didn’t seem to bother him at all. I think the farther he goes the better he gets. I used him a little too much going into the first turn but by the time I got to the backstretch I had to give him a little break where he got to be comfortable again and then he started rolling. I was pretty happy after that.”

Bill Mott (Hofburg, 2nd): “I think we’re all pleased. Naturally, winning would have been the only thing that would have been better but he ran well and he galloped out well. He took ak lot of dirt and he was very professionial. He did everything right. He was much more seasoned today when he came down here and was in the post parade and everything. He seemed to be more at home. We had him down here (at Gulfstream) for a few days. He was here since Wednesday so he had an opportunity to train her and school in the gate. He was much better. He was the perfect gentleman and a professional today.

“We’ve certainly got to think about that (Kentucky Derby). He ran well enough and galloped out good enough. I guess we’ve got to take everything into consideration but we’re certainly not going to rule anything out at this point.”

Jose Ortiz (Hofburg, 2nd): “Perfect trip, he did it like a champ. He proved a lot today and got beat by a good horse. I followed Audible the whole way, good trip and he behaved like a champ. I’m really happy with how he’s progressing, I think he’s a really nice horse.” 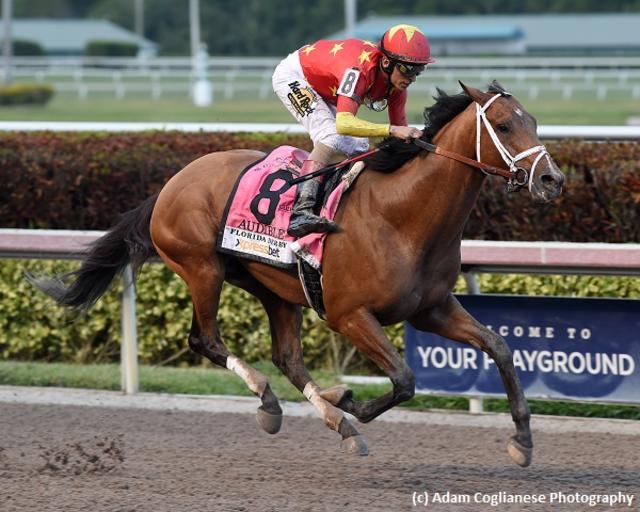