Code of Honor breaks through in Fountain of Youth 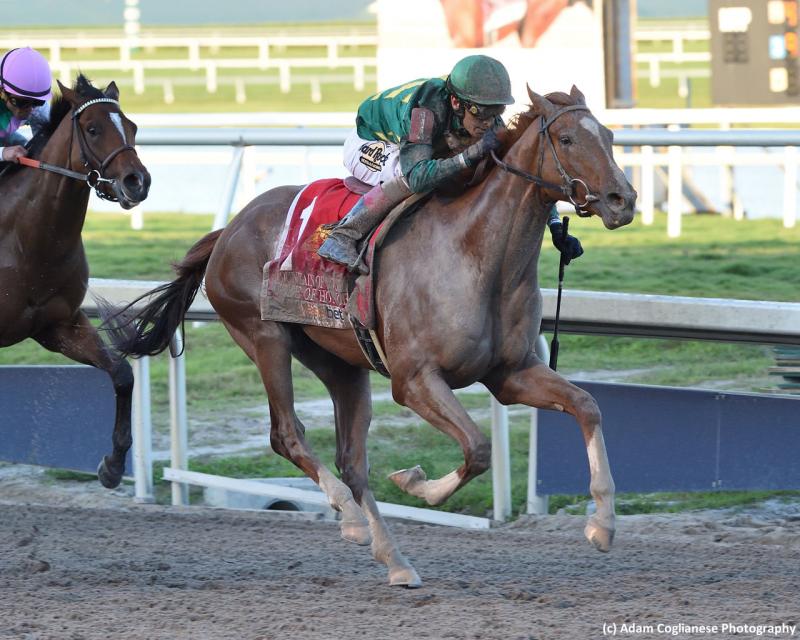 Code of Honor flashed enormous promise in his first two starts but nothing went according to plan over the following months as he was forced to scratch from a pair of Kentucky Derby qualifiers during the fall and recorded a disappointing fourth as an odds-on favorite in early January. The flashy chestnut colt rebounded in Saturday’s $400,000 Fountain of Youth (G2) at Gulfstream Park, offering a bold rally to win by nearly a length and revive his Kentucky Derby hopes.

The 50-point winner’s prize increases Code of Honor’s point total to 54, easily enough to make the 20-horse field every year since the Road to the Kentucky Derby series was instituted in 2013. He garnered four points for a troubled second in the Champagne (G1) in his second start.

Owned and bred by W.S. Farish, Code of Honor has Kentucky Derby-winning connections in trainer Shug McGaughey (Orb in 2013) and jockey John Velazquez (Animal Kingdom in 2011 and Always Dreaming in 2015).

Code of Honor was overlooked as the 9-1 fifth choice in the 1 1/16-mile Fountain of Youth. He rated off the pace in fifth, nearly 10 lengths back as 6-5 favorite Hidden Scroll was hustled forward and dueled with 132-1 longshot Gladiator King through quick opening fractions of :22.80 and :45.69.

Hidden Scroll reached the three-quarters point in 1:10.42 with a one-length edge, but his headstrong tactics were starting to take a toll. Code of Honor advanced closer rounding the far turn and accelerated into the stretch full of fun. Hidden Scroll tried to battle back but could not match strides as Code of Honor blew into a clear lead.

“I thought we drew a good post. We saved some ground going around the first turn and just be patient,” McGaughey said of the trip. “We got the set up.”

“I got there a little too soon to tell you the truth, but once he got in front he opened up a little bit,” Velazquez added.

Bourbon War, the 4-1 third choice, came flying late on the far outside to be a clear second and netted 20 points toward a Kentucky Derby berth. It was two lengths back to 3-1 second favorite Vekoma, who lacked the necessary late kick after advancing into a threatening position at the conclusion of the far turn. He outfinished fourth-placer Hidden Scroll by a neck.

A son of Noble Mission, a full-brother to European superstar Frankel, Code of Honor hails from the Grade 3-winning mare Reunited, a daughter of Dixie Union, sire of Belmont Stakes winner Union Rags. An impressive debut maiden winner at Saratoga, Kentucky-bred Code of Honor has now earned $384,820 from a 4-2-1-0 career record.

McGaughey said he would prefer to remain for the $1 million Florida Derby (G1) at Gulfstream Park on March 30 but will also consider the Blue Grass (G2) at Keeneland and Wood Memorial (G2) at Aqueduct (both April 6) for Code of Honor’s final Kentucky Derby prep race. 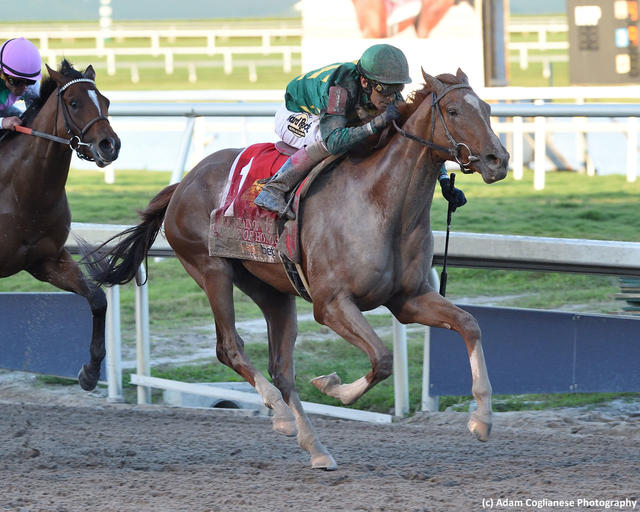