Cosmic Burst puts her three-race win streak on the line Saturday as part of a six-filly field entered to go a mile in the $125,000 Martha Washington Stakes at Oaklawn Park.

The race is part of the Road to the Kentucky Oaks series of points contests and offers up 10-4-2-1 points to the respective top four finishers.

Cosmic Burst makes her sophomore bow in this spot off a 5 1/4-length victory for trainer Donnie Von Hemel in the December 17 Trapeze Stakes at Remington Park. That was the Violence filly’s third straight score following a runner-up effort in her career debut at Churchill Downs last September. Richard Eramia guided Cosmic Burst in the Trapeze for the first time and retains the mount here.

Secret Passion is the only runner from the January 20 Dixie Belle Stakes to continue on through Oaklawn’s series of three-year-old filly preps for the Kentucky Oaks. The Scott Gelner-trained daughter of Archarcharch broke her maiden second out at Prairie Meadows and stayed at that track to take the Prairie Gold Lassie Stakes next out.

Following a brief foray on the turf, resulting in a well-beaten 11th in the Juvenile Fillies Stakes at Kentucky Downs, the dark bay miss returned to the winner’s circle in an allowance/optional claimer on Remington Park’s main track before closing out her juvenile campaign with a third in the La Senorita Stakes at Retama Park on October 14. Secret Passion ran third in the Dixie Belle while making her sophomore bow last out and keeps Edwin Maldonado in the pilot’s seat here.

Tyfosha just took her maiden three weeks ago at Oaklawn Park off a five-month vacation. The gray daughter of Flatter was runner-up in her three prior efforts at Santa Anita Park and Del Mar for trainer Doug O’Neill, and keeps jockey Alex Canchari aboard for the Martha Washington.

Sassy Sienna was a 9 1/2-length winner over track and distance in her 2018 debut on January 15 for trainer Brad Cox. That was the first win for the Midshipman filly since she broke her maiden five races prior over Indiana Grand’s turf. The Kentucky-bred lass finished third in the P.G. Johnson Stakes after her debut score, and reunites with Gary Stevens in this spot.

The Kellyn Gorder-trained Red Ruby took two tries at Churchill Downs to break her maiden, getting the job done November 25 by 3 1/2 lengths, and faces winners for the first time here under Robby Albarado.

Completing the field is Grats Road, who broke her maiden in her third attempt but has been beaten double-digit lengths in a trio of starts since then. 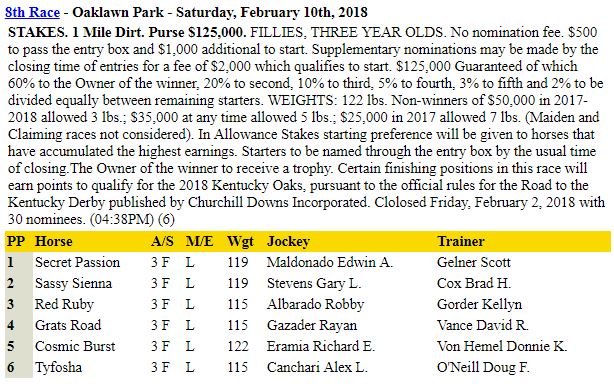 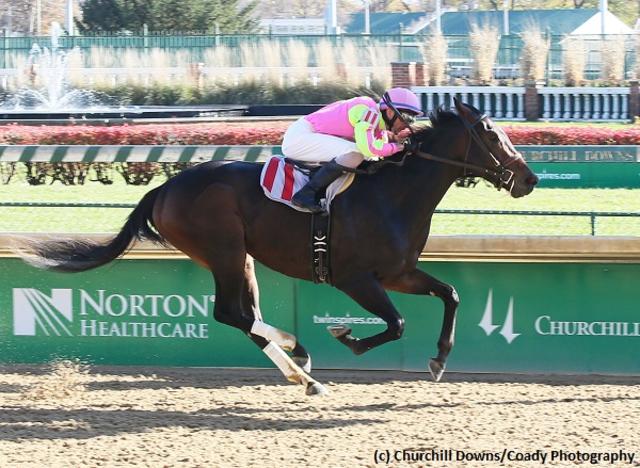