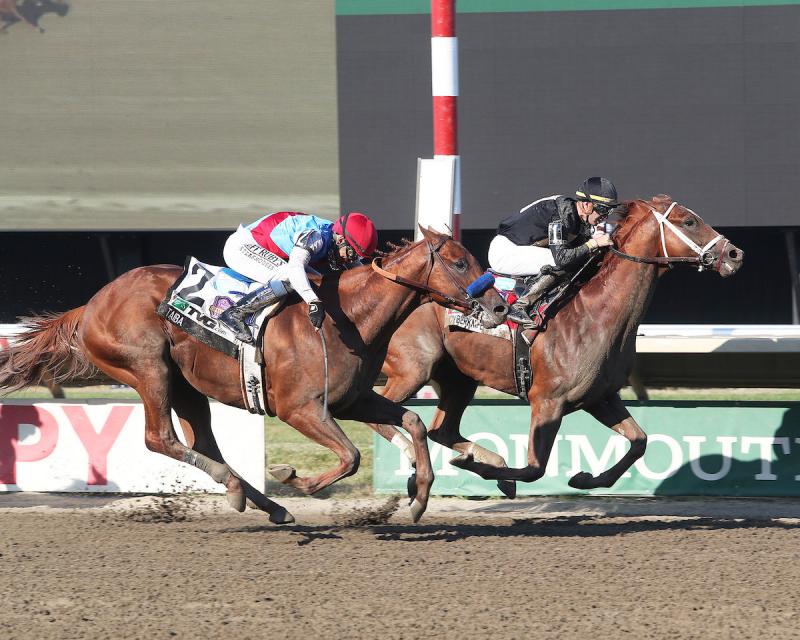 The brilliant Jack Christopher was bet down to 7-10 favoritism as he tried two turns in Saturday’s $1,017,500 Haskell (G1) at Monmouth Park, but the 1 1/8-mile distance proved too far. Instead, a pair of Kentucky Derby (G1) participants stormed past him to fight out the finish. Gold Square’s Cyberknife rallied up the rail to deny Taiba by a head in track-record time.

Trained by Brad Cox and ridden by Florent Geroux, the 7.80-1 Cyberknife rated several lengths off the early pace set by 56-1 longshot Benevengo. Jack Christopher stalked the leader on the outside. Taiba, the 2.10-1 second choice, also tracked closely on the rail, only to drop back as the field prepared to leave the backstretch and approach the far turn.
Cyberknife shot into the gap left by Taiba. That might have been the winning maneuver, for he saved ground for his stretch run, while Taiba ended up moving outside to regain momentum.
Jack Christopher put away the pacesetter turning for home, but he didn’t open up with the authority he’s had around one turn. On the contrary, he was about to be overwhelmed by closers on either side.
Taiba, now back in top gear, rolled in a manner reminiscent of his Santa Anita Derby (G1) win. But then Cyberknife thrust through on the inside. The two sons of Gun Runner reached for the wire. Although Taiba did his best to fight back, Cyberknife was too strong.
The final time of 1:46.24 bettered the track record of 1:46.53 that had just been established earlier on the card. Four races prior to the Haskell, in the Monmouth Cup (G3), Highly Motivated eclipsed the 1:46.80 mark long held by Spend a Buck, the 1985 Kentucky Derby hero.
Jack Christopher checked in another two lengths back in third, but well clear of fourth-placer Howling Time. Benevengo, King of Hollywood, disappointing Florida Derby (G1) winner White Abarrio, and One Time Willard completed the order of finish.
The Haskell serves as a “Win and You’re In” for the Breeders’ Cup Classic (G1), so Cyberknife has booked his free ticket to the 1 1/4-mile championship event at Keeneland. The victory was especially meaningful for owner Al Gold, a decades-long resident of Ocean Township, New Jersey, who described Monmouth as his “old backyard.”
Cyberknife had been a work in progress on the Derby trail. While the spirited chestnut showed plenty of physical ability, the mental part of the game was a challenge. He was sixth in his stakes debut in the Lecomte (G3), and later put it together with a decisive score in the Arkansas Derby (G1). After regressing to 18th in the Kentucky Derby, Cyberknife bounced back to prevail in a hard-fought Matt Winn (G3), also at Churchill Downs, and made it two straight in the Haskell.
“I think this is his best race to date,” Cox said. “Throughout the race I thought he looked very professional with the way he handled himself. At the quarter-pole, Florent had a nice hold of him and he was loaded.
“He responded well when asked. He flew at the end. I am very proud of him. He was able to settle. Florent took a good hold of him and then made a run up the backside and got him in position along the rail. Then Florent turned for home and he looked like he had a lot of horse. He was just figuring out whether he was going inside or outside of the leader. I think at that time it was Jack Christopher.
“It looked like he made the right decision staying to the inside and we were able to hold off Taiba. It was a big effort. I’m very proud of this horse and our whole staff. He’s been a challenging horse at times. A lot of the good ones are.”
Geroux commented that his first move into position was similar to the Arkansas Derby.
“I pushed the gas a little bit like I did in the Arkansas Derby just to get into him,” his regular rider said. “He responded instantly.
“He has a turn of foot like a turf horse on the dirt. He can make several moves in the race. We knew that before the race. That’s why I used him a little bit to take good position at the half-mile. From there I stayed quiet until it was time to go.”
That turf-like quality echoes his dam, triple-surface threat Awesome Flower, who was a Grade 2-placed multiple stakes winner. Bred by Ken and the late Sarah Ramsey in Kentucky, Cyberknife sold for $400,000 as a Fasig-Tipton yearling. He’s now earned $1,596,520 from a record of 9-5-2-0.
Cyberknife will point to the Aug. 27 Travers (G1) at Saratoga, where he’s likely to renew rivalry with the Kentucky Derby trifecta of Rich Strike, Epicenter, and Zandon. The Travers picture will be clarified after upcoming stakes action at the Spa. Friday’s Curlin S. could yield a Travers contender, and Saturday’s Jim Dandy (G2), the key local prep, is expected to pit Epicenter and Zandon against Preakness (G1) victor Early Voting.