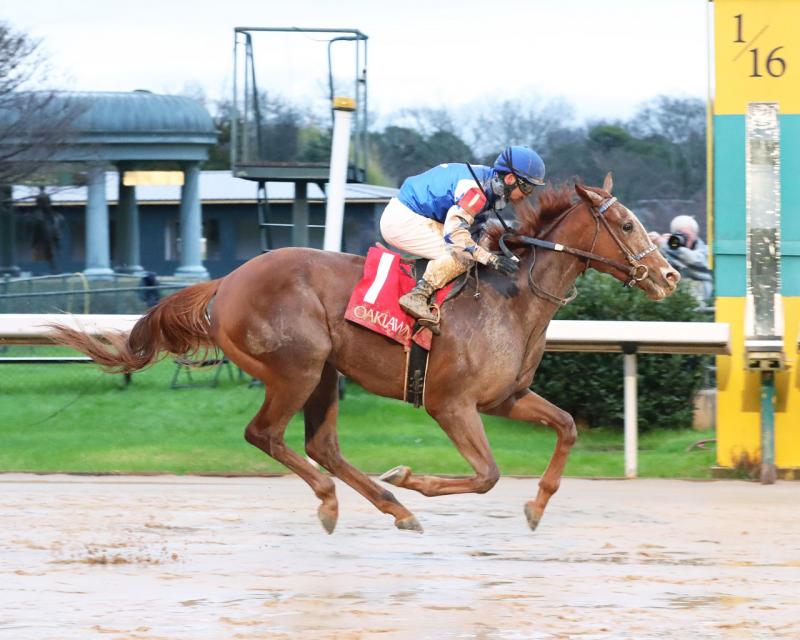 Dash Attack made it 2-for-2 in the Smarty Jones S. at Oaklawn Park (Coady Photography)

A perfect 2-for-2 since beginning his career at Oaklawn Park, Smarty Jones S. hero Dash Attack bids to keep his momentum going in Saturday’s $750,000 Southwest S. (G3). Six of his rivals are returning from the Smarty Jones, and among the intriguing fresh faces is California shipper Newgrange.

Dash Attack became trainer Ken McPeek’s fourth current Kentucky Derby (G1) prospect, following Rattle N Roll, Smile Happy, and Tiz the Bomb. The son of Munnings swept from just off the pace in his Dec. 5 debut, then rolled from farther back to win the Jan. 1 Smarty Jones going away. Both came at a mile on off tracks, his maiden on a good course and the Smarty Jones in the slop.

The Hot Springs, Arkansas, forecast suggests that the strip should be fast for the 1 1/16-mile Southwest. Carded as the 9TH race on Saturday at 5:22 p.m. (ET), the Southwest is worth Derby points on the 10-4-2-1 scale.
Smarty Jones runner-up Barber Road, third Ignitis, fourth Kavod, fifth Vivar, seventh Ben Diesel, and 12th Don’tcrossthedevil are all back to try again. Of those, the two with the most persuasive chances of improving are Ben Diesel and Vivar.

Two starts back in a salty Kentucky Jockey Club (G2), Ben Diesel was fourth and Vivar sixth, both ahead of subsequent Lecomte (G3) upsetter Call Me Midnight. In the Smarty Jones, Ben Diesel was compromised by the far outside post 13, but he could work out a better trip on the rail in the Southwest. While Vivar is now the one stuck widest of all in post 12, that could be mitigated by the Brad Cox trainee’s adding blinkers.

Two of the Oaklawn newcomers are coming off the Remington Springboard Mile. Osbourne was a hard-trying second who forced favorite Make It Big to dig deep, and fourth-placer Classic Moment got shuffled back at one stage. Classic Moment, by Classic Empire and a grandson of recently-deceased Broodmare of the Year Leslie’s Lady, might maintain position better this time. Trainer Steve Asmussen is trying him in blinkers.
Asmussen could have an even better prospect in Costa Terra. Last seen closing for fifth in the Oct. 9 Breeders’ Futurity (G1), the Winchell Thoroughbreds homebred had flashed real potential at Ellis Park over the summer. The blueblood son of Gun Runner flew late to get up in time sprinting five furlongs, then rattled home a green third in the Ellis Park Juvenile.
Newgrange invades for Bob Baffert, whose horses are ineligible for Derby points because he is suspended by Churchill Downs Inc. But the frontrunner will have an impact on the race shape, and as a test of the local form. A sharp debut winner at Del Mar Nov. 28, Newgrange stretched out to win the one-mile Sham (G3) at Santa Anita on New Year’s Day.
Rounding out the dozen entrants is Call Me Jamal, who wired a Dec. 18 maiden at this track and trip in his first route attempt. His name honors Seattle Seahawks safety Jamal Adams.