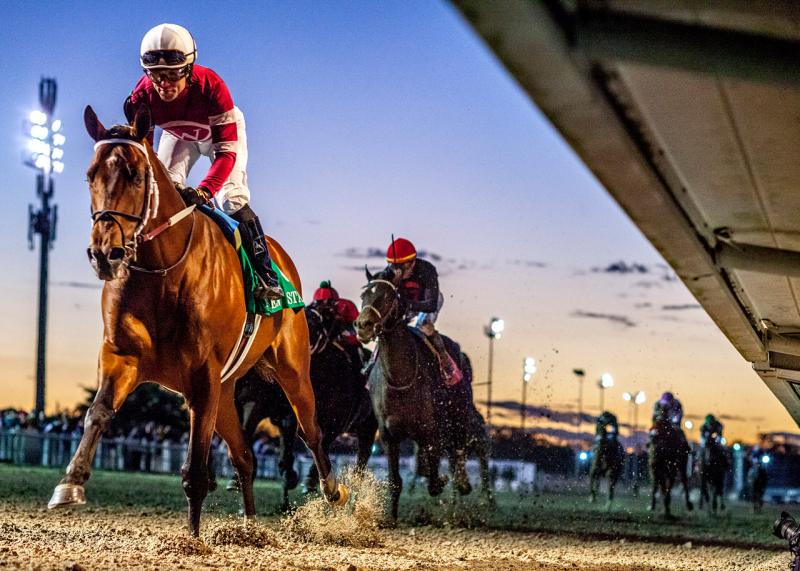 Saturday’s $1 million TwinSpires.com Louisiana Derby (G2) is the first U.S. Road to the Kentucky Derby race offering points on the 100-40-20-10 scale. The rematch is on between Epicenter and Call Me Midnight, and Florida shippers Rattle N Roll and Galt add depth to the 1 3/16-mile test at Fair Grounds.

Call Me Midnight and Epicenter first squared off in the Jan. 22 Lecomte (G3). Epicenter was aiming to follow up on his 6 1/2-length rout of the Dec. 26 Gun Runner S., the opener on the Fair Grounds Road to the Derby. Sent off at odds of 8-5, Epicenter had to run hard on the front end, and late-running Call Me Midnight nabbed him at the wire to spring the upset.
Although Call Me Midnight was overlooked at 28-1, the Keith Desormeaux colt had some form in the book. He was a better-than-appears second in a Keeneland maiden to Giant Game, who went on to place third in the Breeders’ Cup Juvenile (G1). Call Me Midnight himself broke his maiden next time out at Keeneland, then wheeled back on two weeks’ rest to finish seventh in the Kentucky Jockey Club (G2). That’s turned out to be a key race, with the top three being Smile Happy, Classic Causeway, and White Abarrio.
Call Me Midnight benefited from a two-month freshening between the Kentucky Jockey Club and Lecomte. Thus the son of Midnight Lute deliberately skipped the next points race at Fair Grounds, the Risen Star (G2), to arrive in peak condition for the Louisiana Derby. James Graham, 2-for-2 aboard Call Me Midnight, reunites with the deep closer.
While Call Me Midnight was relaxing, Epicenter came right back to conquer the Feb. 19 Risen Star in front-running fashion. The Steve Asmussen pupil was able to get away with a slightly easier opening half-mile, leaving him plenty left in the stretch drive. Smile Happy closed belatedly in the 1 1/8-mile affair, but Epicenter won by daylight.
Epicenter is listed as the 7-5 favorite on the Louisiana Derby morning line with a returning Joel Rosario. He could be part of a big day for his connections, who also have undefeated champion filly Echo Zulu in the Fair Grounds Oaks (G2). To win his third Derby scoring race at Fair Grounds, however, Epicenter will have to avoid a pace battle, especially as he negotiates another sixteenth of a mile.
The presence of Zozos could be a complicating factor. Trained by Brad Cox, the unbeaten son of Munnings pressed the pace before running away with an Oaklawn Park allowance by 10 lengths. Zozos, drawn toward the inside in post 2, is likely to go forward early with Florent Geroux.
Another potential pace player is Galt, champion Songbird’s full brother, who led in the Holy Bull (G3) before tiring to fourth at Gulfstream Park. The Bill Mott trainee was held up well off the pace last time out in the Fountain of Youth (G2), where he was brought down in a chain reaction turning for home. Thankfully none the worse for the mishap, Galt will break from post 8 of 9 on Saturday.
The possibility of a strong tempo would suit not only Call Me Midnight, but also Breeders’ Futurity (G1) hero Rattle N Roll. Ruled out of the Breeders’ Cup Juvenile by a foot issue, Rattle N Roll resurfaced in the Fountain of Youth and wound up a non-threatening sixth. But trainer Ken McPeek had cautioned that the colt would need the comeback run, and Rattle N Roll could be ready to do just that in his second start off the bench.
The Todd Pletcher-trained Pioneer of Medina makes his third visit to New Orleans. The winner of a Jan. 22 allowance on the Lecomte undercard, the Pioneerof the Nile colt was fourth after chasing Epicenter early in the Risen Star. Kupuna was runner-up to Arkansas Derby (G1)-bound Cyberknife in a Fair Grounds allowance on Risen Star Day, while blueblood Curly Tail, by Curlin and out of a full sister to Omaha Beach, just broke his maiden at Oaklawn Park.
Rounding out the nine-horse field is Silent Power, who must improve substantially from a fourth in the Big Drama S. at Delta Downs.
The finale of a 12-race card, encompassing a total of eight stakes, the Louisiana Derby is scheduled for 6:44 p.m. (ET).