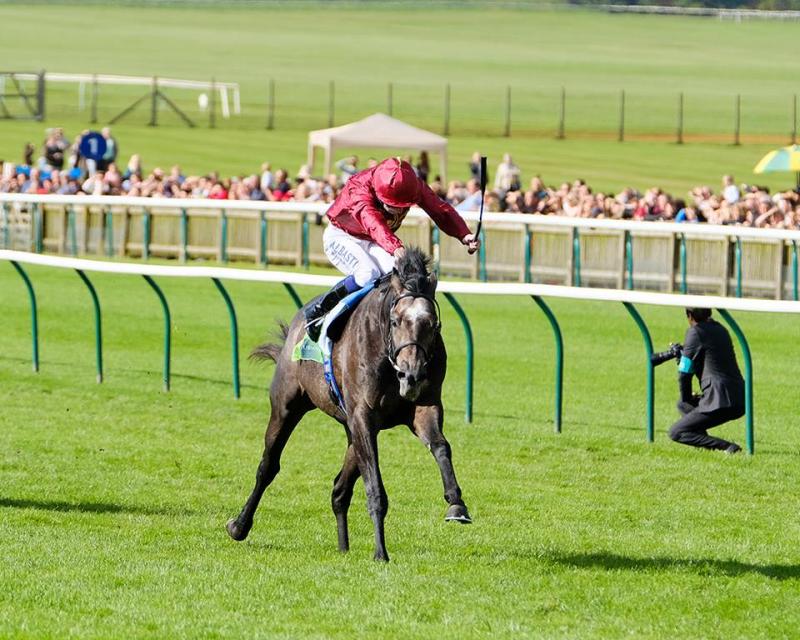 Roaring Lion, the 2017 Royal Lodge winner, has become a star sophomore on the European turf (Photo courtesy of Newmarket via Facebook)

Saturday’s Royal Lodge (G2) at Newmarket (8:50 a.m. EDT) serves as the first scoring race on the European Road to the Kentucky Derby. The mile test could have a more immediate impact for Churchill Downs, as a “Win and You’re In” for the November 2 Breeders’ Cup Juvenile Turf (G1).

Trainer John Gosden has won the Royal Lodge two of the past three years, most recently with Roaring Lion, who became a star this season. The winner of three straight Group 1 races over older horses, Roaring Lion may be seen at the Breeders’ Cup. The three-year-old has earned a free pass to the Turf (G1), through his victories in Breeders’ Cup Challenge races, but connections are also considering a switch to dirt for the Classic (G1).

Could Saturday’s renewal of the Royal Lodge showcase a talented two-year-old with the scope to develop as Roaring Lion did?

Gosden once again has a force to reckon with in Beatboxer, the early Royal Lodge favorite. Like Roaring Lion, Beatboxer is a Kentucky-bred sold at the Keeneland September Yearling Sale. The $650,000 purchase by Scat Daddy, sire of 2018 Triple Crown hero Justify, is unbeaten in two starts. Sporting the silks of Princess Haya of Jordan, Sheikh Mohammed’s wife, Beatboxer justified favoritism on debut at Sandown before a dominant performance at Haydock. He’ll try to keep his perfect record intact while stepping up in class versus stronger opposition.

Aidan O’Brien hasn’t won the Royal Lodge since 2011, but the master of Ballydoyle has finished a close second in the last three runnings, and he pitches in a trio of contenders. All three have the alternative option of the Beresford (G2) at Naas on Sunday. Cape of Good Hope, a full brother to 2016 Breeders’ Cup Turf winner Highland Reel, has not raced since his runner-up effort to Godolphin’s budding star Quorto in the Superlative (G2) back on July 14. Mohawk, third in the Futurity (G2) and fourth to Quorto in the Vincent O’Brien National (G1), is eligible to do better stretching out to a mile. Sydney Opera House must improve off his fifth in the KPMG Champions Juvenile (G2) during Irish Champions Weekend. Note that go-to rider Ryan Moore is not on any of them – he’s instead at Belmont Park to pilot Mendelssohn in the Jockey Club Gold Cup (G1).

Arguably the best betting value is offered by Arthur Kitt. An 8-1 chance on the North American morning line, the son of triple classic winner Camelot captured his first two starts, notably the Chesham S. at Royal Ascot. The Tom Dascombe trainee was then beaten by the most exciting two-year-old seen in Britain, Gosden’s Too Darn Hot, in the Solario (G3). But Arthur Kitt was himself well clear of the rest, including fourth-placer Victory Command, and that formline could stand up well here.

Kuwait Currency, like Roaring Lion a Kentucky-bred son of Kitten’s Joy, brings a two-race winning streak. The Richard Hannon pupil comes off a victory in Salisbury’s Stonehenge S. over this mile trip.

Smart debut scorer Kadar represents Phoenix Thoroughbred, the same owner as Gronkowski, the inaugural European Road winner and eventual runner-up in the Belmont (G1). Sold for €700,000 (about $836,000) at the French auction house Arqana in May, the Scat Daddy colt is out of a half-sister to 2000 Breeders’ Cup Turf champion Kalanisi.

Rounding out the field are Duke of Hazzard, third to Arthur Kitt in the Chesham and a near-miss second in a Deauville stakes, and Fox Tal, fourth to Kuwait Currency in the Stonehenge.