Godolphin’s homebred ROYAL MARINE could get the opportunity to test dirt while wintering in Dubai. That makes the Kentucky Derby (G1) trail a plausible option for the improving colt who landed the October 7 Prix Jean-Luc Lagardere (G1) in his stakes debut.

Trained, like Thunder Snow, by Saeed bin Suroor, Royal Marine is a son of Raven’s Pass, hero of the 2008 Breeders’ Cup Classic (G1) when it was staged on Santa Anita’s old synthetic surface. Raven’s Pass is himself by Elusive Quality, sire of 2004 Derby and Preakness (G1)-winning champion Smarty Jones.

Royal Marine’s dam, Inner Secret, has also produced French stakes winner Crystal River and Secret Ambition, runner-up in the Burj Nahaar (G3) on the Meydan dirt. The mare is in turn a half-sister to Group 1-winning milers Librettist and Dubai Destination as well as Group 2 victor Secret Number. Because Secret Number is by Raven’s Pass, he is closely related to Royal Marine – a three-quarter brother.

Debuting over six furlongs at Newmarket on August 25, Royal Marine was sent off as the 9-4 second choice. But he failed to run up to expectations after acting up in the gate and wound up sixth. The race has turned out to be a key one. The victorious favorite, Jash, came back to romp at Salisbury and later finished a terrific second to Ten Sovereigns in the Middle Park (G1). The third, fourth, and fifth from Jash’s debut have likewise gone on to win.

Royal Marine fit the pattern when graduating next time out during the St Leger Festival at Doncaster. Striding to the early lead, he repelled a challenge and pulled 2 1/4 lengths clear. His final time for seven furlongs on good-to-soft ground, 1:26.29, was faster than the 1:26.55 posted by well-regarded juvenile Sangarius in the Flying Scotsman S. one race earlier. Moreover, the runner-up in Royal Marine’s maiden, Turgenev, has won his next two in grand style.

The Jean-Luc Lagardere, held on Arc Day at ParisLongchamp, represented a class hike for Royal Marine. The only runner without stakes experience, he passed his test against more seasoned opponents to earn 10 points on the European Road to the Kentucky Derby. Royal Marine’s stalk-and-pounce victory over Aidan O’Brien’s Broome again showcased a running style that can transfer to dirt.

With the Jean-Luc Lagardere serving as a “Win and You’re In” for the Breeders’ Cup Juvenile Turf (G1), Royal Marine has a free ticket to Churchill Downs. But he’s likely to ship to Dubai with a view toward the World Cup Carnival, where he can continue his upward curve.

“He could be anything,” bin Suroor said. 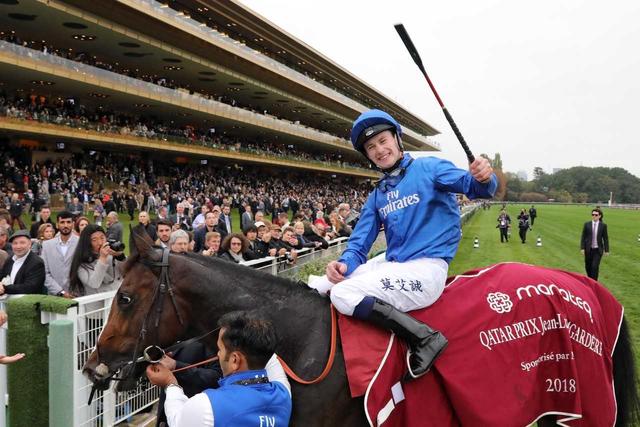