Courtlandt Farms’ homebred Greatest Honour continued his ascent as a major Kentucky Derby (G1) contender in Saturday’s $300,000 Fountain of Youth S. (G2) at Gulfstream Park. Following up on his dominant display in the Jan. 30 Holy Bull (G3) at the same track and 1 1/16-mile trip, the even-money favorite swept past pacesetter Drain the Clock and to the top of the Derby points leaderboard.

Greatest Honour’s 1 1/2-length margin in the Fountain of Youth wasn’t as gaudy, but the Shug McGaughey pupil was encountering a different race dynamic. The Tapit blueblood raced farther behind than he did in the Holy Bull, encountered a spot of trouble, and had to overhaul a better front runner playing catch-me-if-you-can.
Drain the Clock, a perfect 4-for-4 at Gulfstream, threatened to carry his speed in this first start over a route. For much of the way, the 2.80-1 second choice was doing just that. Drain the Clock steered a bit off the rail into the first turn, and as a result, his closest pursuers were briefly tightened up – Sososubtle and Fire at Will (the Breeders’ Cup Juvenile Turf [G1] winner reverting to dirt). Establishing himself on the lead, he spurted away into the stretch.
Greatest Honour, on the other hand, still had a lot of ground to make up in traffic. In fact, he was actually outmoved on the far turn by 18-1 shot Papetu, who was circling from last to second. But once straightening, Greatest Honour began to rev up, and his late surge was irresistible.

Under regular rider Jose Ortiz, Greatest Honour stopped the clock in 1:44.02 and banked 50 Derby points. Combined with his 10 from winning the Holy Bull, he now leads with 60 points.

“When we hit the turn,” Ortiz recapped, “I bumped the horse outside of me and lose my hind end a little bit and it was very hard to get him back going. He’s such a big horse with such a big stride. At the three-eighths pole I’m trying to get him going and I got a space on the inside but I didn’t want to have to stop him again, so I decided to go wide and when he hit the clear, boom. He was there for me. Huge run.”
“I wasn’t real comfortable,” McGaughey said of how the race unfolded. “I could see what was going on and I felt like if (Ortiz) got him in the clear then we could have a shot to make a run at him. The horse that was second (Drain the Clock), when he did break clear I said, ‘Uh, oh.’ But, he’s a really nice horse.
“The pace wasn’t that fast today, I don’t think, but he was able to overcome it. He’s won twice down here now in stakes doing what he doesn’t want to do, and that’s a mile and a sixteenth. Like Jose said, I’m glad these mile and a sixteenth (races) are behind us.”
Drain the Clock almost managed to run out the clock, and earned 20 points for his commendable second. Not nominated to the Triple Crown, the son of Maclean’s Music is expected to turn back in distance.
Papetu reported home another two lengths back in third, improving on his fourth from the Holy Bull, and adding 10 points for a total of 11. Tarantino received five points in fourth; previously runner-up in the Holy Bull, he now has nine points. Rounding out the order of finish were Jirafales, King’s Ovation, Prime Factor, Fire at Will, Tiz Tact Toe, and Sososubtle.

The winner of three straight, Greatest Honour is on a trajectory reminiscent of McGaughey’s 2013 Kentucky Derby winner, Orb, who also took the Gulfstream road to Louisville. Orb turned the Fountain of Youth/Florida Derby (G1) double. Greatest Honour will probably try to further the parallel in the Mar. 27 Florida Derby, at a 1 1/8-mile distance that would suit him well.

“We’ll be looking forward to getting him stretched out,” McGaughey said. “Hopefully it’s in the near future but, if not, I know what we’ve got. Hopefully as we keep going longer he’ll keep improving. The farther the better for him.” 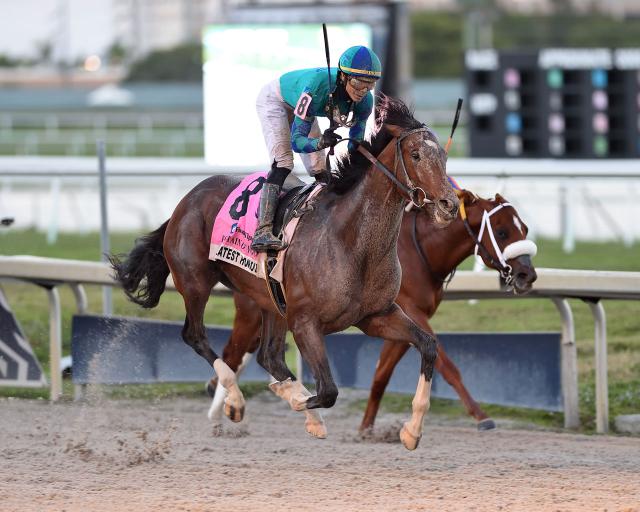