Jack Christopher much the best in Champagne

Jack Christopher emerged as New York's leading juvenile male on Saturday with a dominating performance in the $500,000 Champagne S. (G1) at Belmont Park.

Sent off as the 17-10 favorite in his stakes debut, Jack Christopher rated in second behind Gunite until the far turn, when he swiftly moved past the Hopeful (G1) winner. Opening up by more than five lengths in mid-stretch, Jack Christopher still held a comfortable 2 3/4-length lead at the finish over the maiden Commandperformance.

"He gave me a great kick," jockey Jose Ortiz said. "When he passed (Gunite), he stopped running a little bit. He didn't give me everything he had, I believe. I think first time going a mile this will help him for that next step."

Second choice Wit rallied for third, seven lengths behind Commandperformance. My Prankster edged Gunite for fourth, while Kavod trailed the field of six.

Owned by Jim Bakke, Gerald Isbister, Coolmore Stud, and Peter Brant, Jack Christopher is trained by Chad Brown and covered one mile over a fast track in 1:37.31. He paid $5.40.

As part of the 2022 Road to the Kentucky Derby series, the Champagne awarded Derby qualifying points of 10-4-2-1, respectively, to the top four finishers.

Jack Christopher has now won both starts for earnings of $330,000. Heavily backed at 11-10 in his Aug. 28 debut at Saratoga going six furlongs, Jack Christopher cruised home that day by 8 3/4 lengths. His next port of call will be the Nov. 5 Breeders' Cup Juvenile (G1).

"What I like a lot about him is that he switches off nicely. He's not a horse that pulls. If you drop your hands, he'll switch off and rate," Brown said. "Will he do that around two turns? I don't know, but we'll be sure to have him prepared in the morning to take a little dirt and sit. We'll see if he can do it at Del Mar."

Bred in Kentucky by Castleton Lyons and Kilboy Estate, Jack Christopher sold for $135,000 as a Fasig-Tipton October yearling.

A son of Munnings, Jack Christopher was produced by Rushin No Blushin, a Half Ours half-sister to multiple Grade 1 winner Street Boss. 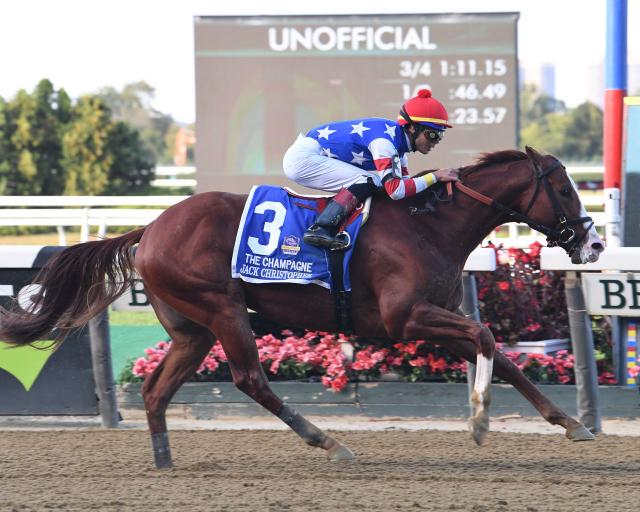