Gary and Mary West’s homebred Concert Tour notched 50 points on the 2021 Road to the Kentucky Derby following his 4 1/4-length triumph in the $1 million Rebel S. (G2) at Oaklawn Park on March 13. The superb sophomore endured 1 1/16 miles in 1:43.18 under the guidance of regular pilot Joel Rosario.

The Bob Baffert pupil improved his lifetime line to 3-3-0-0, $756,600, following his second consecutive graded stakes tally. He debuted on Jan. 15 at Santa Anita in a six-furlong maiden special weight dash and posted a font-running, 3 1/2-length score as the even-money choice. In his second performance, the colt tracked the early pace before inching clear late to take the San Vicente S. (G2).

His conditioner spoke well of his unbeaten trainee when stating following the Rebel, “That was nice, impressive. He's a very, very fast horse. He looked like he was doing it pretty easily, though. They slowed up a little bit down the backside. Joel, you could really tell he was controlling the race. This is a really top horse. I was going to be disappointed if he didn't do what he did today.”

Concert Tour is the first black-type performer produced from the winning Tapit mare Purse Strings. Bred in the Bluegrass State, the bay colt is related to 2008 champion two-year-old filly Stardom Bound, who capped her fine juvenile campaign with a victory in the Breeders’ Cup Juvenile Fillies (G1) at Santa Anita.

To this stage of his development, Concert Tour has earned solid Brisnet Speed figures of 94-97-95. He aced his initial two-turn test with aplomb, and he gives me every impression of a horse who will be capable of handling more distance with additional seasoning. The three-year-old is an especially alert gate horse who can put himself into a race from the start, and he also has a very high cruising speed to carry that early pace a route of ground.

The son of Street Sense is surely considered as one of the major contenders on the 2021 Triple Crown Trail. A start in the $1 million Arkansas Derby (G1) on April 10 is the next possible destination for the budding superstar. 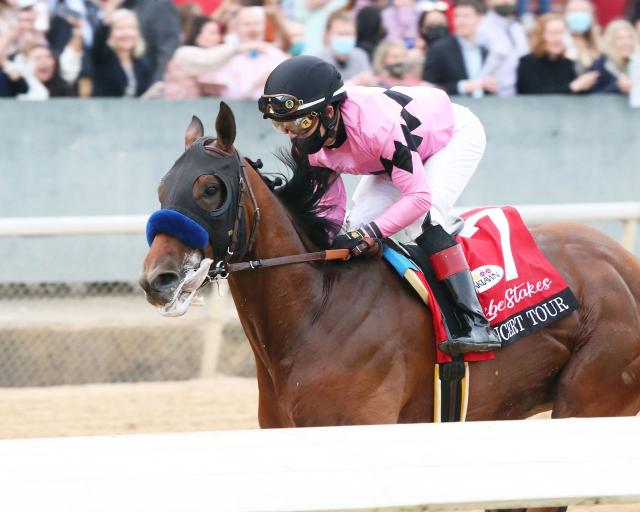