Raise the BAR Racing, LLC’s Dean Martini picked up 20 points on the “2020 Road to the Kentucky Derby” challenge series following his triumph in the $500,000 Ohio Derby (G3) at Thistledown. The 3-year-old completed 1 1/8 miles over the fast main surface in 1:51.60 with Ricardo Mejias in the silks.

Conditioned by Tom Amoss, Dean Martini captured the second race from his last three outings. The son of Cairo Prince notched his first stakes victory in the Ohio Derby and improved his career line to 10-2-4-3, $391,380.

The gelding debuted on August 4 at Ellis Park and finished second in a maiden special weight dash. He hit the board in seven of his first eight lifetime races prior to breaking his maiden at Churchill Downs on May 17th, where he was claimed by his current connections. Most recently, Dean Martini was a sharp runner-up in an allowance tilt beneath the Twin Spires.

Dean Martini went through the sales ring on a pair of occasions. He was a $72,000 purchase as a weanling at the 2017 Keeneland November Breeding Stock Sale, before eventually bringing the gavel down at $220,000 at the 2018 Keeneland September Yearling Sale.

Bred in the Bluegrass State by Brereton Jones and Bret Jones, Dean Martini is the first black-type victor produced from the stakes winning Friends Lake mare Soundwave, who counts herself as a half-sister to 2005 Forward Gal (G2) heroine Letgomyecho.

Dean Martini was visually impressive in the Ohio Derby, and he registered a lifetime best BRIS Speed figure of 98 in the process. The dark bay is obviously an improving sort, but he must prove his class against the best in his division, as well as overcoming a pedigree that is slanted more towards speed than it is distance. He does not give the impression of a prime Triple Crown candidate at this stage of his development, and Dean Martini will need to be supplemented to the Triple Crown for a hefty fee to be eligible for the Kentucky Derby. 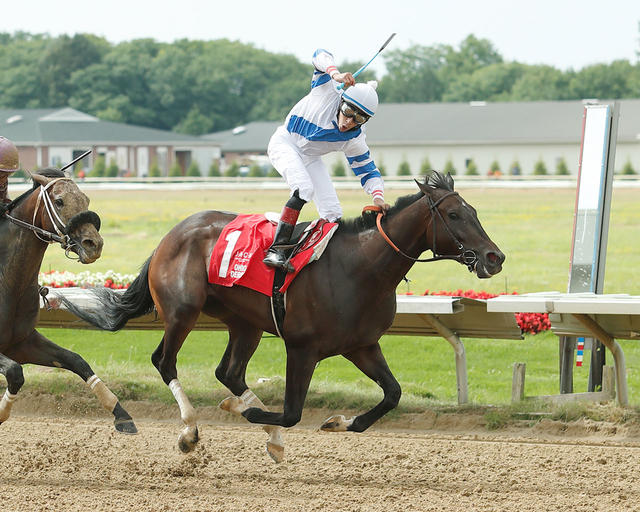