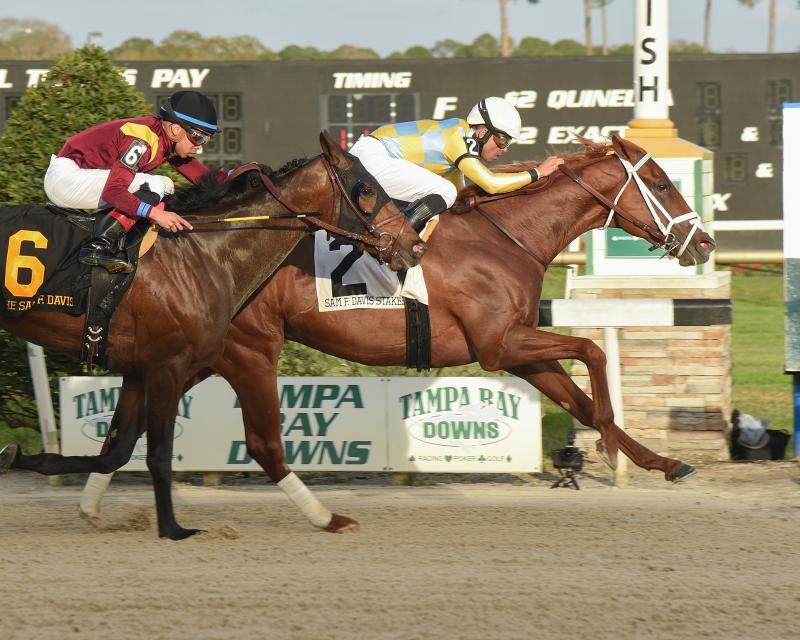 Canadian-bred colt Flameaway wasn’t in the Kentucky Derby conversation prior to the Sam F. Davis Stakes at Tampa Bay Downs Feb. 10 – at least in part because he hadn’t been nominated for the Triple Crown races.

His victory in that race has now put him firmly in the list of Derby contenders – and his connections have said they will make the late payment required for Derby entry.

Bred in Ontario by Phoenix Rising Farms, Flameaway was sold as a short yearling in the 2016 Keeneland January sale for $150,000. He was back before buyers for the Fasig-Tipton Saratoga select yearling sale in August 2016, when he was purchased by John Oxley for $400,000. Leading trainer Mark Casse prepares Flameaway for Oxley.

Flameaway began his career with a maiden sprint victory on the Woodbine synthetic track, and then won the 5 ½-furlong Skidmore Stakes at Saratoga, a race taken off turf to dirt. He disappointed a little when sixth in the Iroquois Stakes (G3) at Churchill Downs, but was back in the winner’s circle in the Dixiana Bourbon Stakes (G3) at Keeneland, another race taken off turf due to weather.

That qualified him for the Breeders’ Cup Juvenile Turf (G1), in which he finished eighth after disputing the pace. He returned to turf Jan. 6 to win the 7 ½-furlong Kitten’s Joy Stakes at Gulfstream Park.

Oxley convinced Casse to try Flameaway on dirt again in the Sam F. Davis, and it proved a good move. Flameaway led for much of the race, was headed on the turn by favorite Catholic Boy – who had beaten him home in the Breeders’ Cup Juvenile Turf – but found more to beat the favorite by half a length.

Given his breeding it’s not surprising Casse wanted to try Flameaway on turf. His second dam Rose of Tara won on turf in Ireland and produced the Canadian grade two turf winner Essential Edge, and Rose of Tara was a daughter of the outstanding broodmare Flame of Tara (Artaius), whose five stakes-winning progeny include the Irish Derby-winning filly Salsabil and the St James’ Palace Stakes winner Marju.

Flameaway’s sire Scat Daddy has been an outstanding sire in the United States and Chile prior to his premature death in late 2015. Most of his best progeny have been on turf, but he has sired horses with top-level form on dirt such as Daddys Lil Darling, Nickname, and El Kabeir.

Many of his best-known horses in Europe have been sprinters, such as Caravaggio, Lady Aurelia, and Acapulco, but he has also sired a number of horse capable of staying 1 ¼ miles and further on turf, such as Dacita, Lady of Shamrock, Harmonize, Il Campione, and Solaria.

Flameaway usually races on the speed, and is a great fighter. If he has the class to be a viable Derby horse, he certainly has the pedigree to stay the trip. He should be watched closely in his Derby prep races. 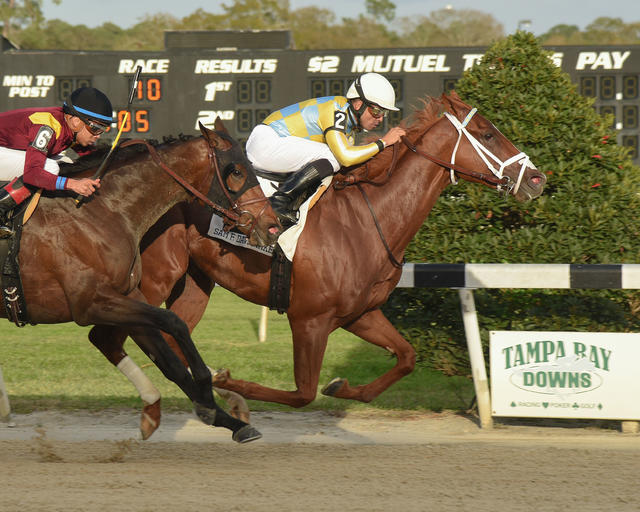