Trainer John Sadler said following the race, “The post dictated our strategy. I saw Umberto in the paddock this morning at 8 a.m. and I told him go big or go home. We had to get out of there with the scratch inside of us. It worked out great and I’m very excited.”

Rock Your World was unveiled on Jan. 1 in a six-furlong turf dash at Santa Anita and drove home an impressive 1 3/4-length winner as the post-time favorite in a 12-horse field. Stretching out and facing stakes foes in his second assignment, the son of Candy Ride was a 2 1/4-length hero of the Pasadena S. after drawing off late to a convincing score. The Santa Anita Derby marked the dirt debut for the unblemished sophomore.

The winner was bred in the Bluegrass State by Hall of Fame trainer Ron McAnally and his wife, Deborah, and attracted a final bid of $650,000 at the 2019 Keeneland September Yearling Sale. He is out of the Empire Maker mare Charm the Maker, who was runner-up in the 2011 Hollywood Starlet S. (G1) and third in the 2011 Oak Leaf S. (G1). The dam counts herself as a half-sister to Grade 2 star Liam the Charmer.

The impressive Rock Your World has been mostly dominant in each career outing to date while posting Brisnet Speed figures of 92-91-102 in the process. He has displayed both good early speed and a fine turn of foot, and both his pedigree and running style suggest that he can go longer effectively as well.

Rock Your World remains a bit of a wildcard on the Triple Crown Trail, but if he continues to ascend with additional seasoning, then the sky could be the limit for the colt. 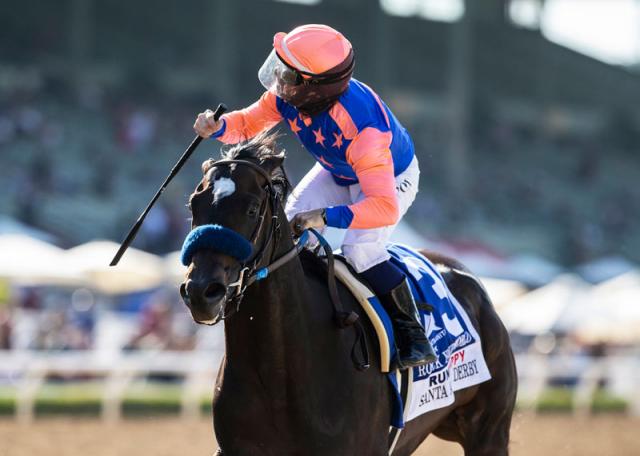