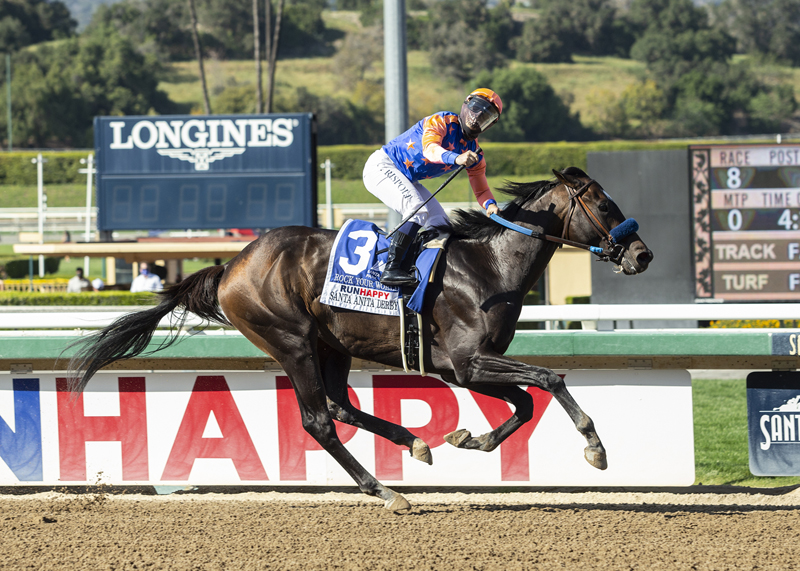 A new name joined the Road to the Kentucky Derby with an upset victory in Saturday’s $750,000 Santa Anita Derby (G1). You might even say his powerful performance rocked the racing world.

Rock Your World entered Santa Anita’s final Kentucky Derby prep race as a wildcard with a promising, but largely unprove,n resume. The John Sadler trainee had dominated his first two starts on turf, including the Pasadena S., but switching to dirt was a question mark. Could Rock Your World produce the same level on form on an unfamiliar surface while stepping up against Grade 1 company?
The answer was a resounding “yes.”
“We have been laying in the weeds. I thought it would be good to start this horse off on the turf, much like (multiple Grade 1 winner) Omaha Beach, and develop,” Sadler told Santa Anita. “The plan was to run him a couple of times on the turf, and now it was time to get the (Kentucky Derby qualification) points.”
From a pedigree perspective, there was no reason to doubt Rock Your World’s dirt ability. As a son of Candy Ride out of the stakes-winning Empire Maker mare Charm the Maker, Rock Your World is bred top and bottom to handle dirt track just fine.

The only other concern was the possibility Rock Your World would wind up racing behind rivals, and thus endure the unfamiliar experience of getting dirt kicked back in his face. But in the end, this question never came up. Under a bold ride from jockey Umberto Rispoli, Rock Your World dashed straight to the lead from post 2, carving out fractions of :22.42, :46.11, and 1:10.64 while closely pursued by longshot Parnelli. Betting favorites Medina Spirit and Dream Shake, exiting second- and third-place efforts in the San Felipe (G2) at Santa Anita, were content to track the pace while racing in close proximity.

“Umberto Rispoli has been a great addition to our jockey colony here,” said Sadler. “The post dictated our strategy. I saw Umberto in the paddock this morning at 8 a.m. and I told him go big or go home. We had to get out of there with the scratch (of Roman Centurian) inside of us.”
Medina Spirit, under Hall of Fame jockey John Velazquez, endeavored to challenge Rock Your World at the top of the stretch. But although the 9-10 favorite tried his best, he proved no match for the pacesetter. Down the lane, Rock Your World widened with authority, drawing clear through a :12.90 final furlong to dominate the 1 1/8-mile race by 4 1/4 lengths in 1:49.17.
“(Medina Spirit) ran well, but the winner took the lead on a fast track and kept running. My horse kept coming and kept coming but couldn’t catch up,” said Velazquez. “He did have some left in the tank at the end and he kept coming, but the other horse got away pretty well and opened up again. It was too hard to catch up.”
Dream Shake held for third place, 2 1/4 lengths behind Medina Spirit, while Defunded, Law Professor, Parnelli, The Great One, Back Ring Luck, and Ottothelegend completed the order of finish. Roman Centurian scratched after failing to come into the race as well as trainer Simon Callaghan had hoped.

For Rock Your World, the victory was worth $450,000 plus 100 Road to the Kentucky Derby qualification points, launching him into sixth place on the leaderboard with just two prep races remaining. A spot in the Churchill Downs starting gate is now assured for the undefeated dark bay colt, who is owned by the partnership of Hronis Racing and Talla Racing.

“We get to go to the Kentucky Derby, that’s going to be a fun day,” said Kosta Hronis of Hronis Racing. “We’re going to try to enjoy this for today and with three-year-olds, he’s only had three starts, making his fourth start in his career in the Kentucky Derby, I guess we really have nothing to lose. Just go in there and enjoy it.”
Three starts, three victories. Rock Your World has handled every test he’s faced so far. An even stiffer challenge waits at Churchill Downs, but if his romping victory in the Santa Anita Derby is any indication, Rock Your World might have just the right blend of speed and stamina to rock the world again on the first Saturday in May. 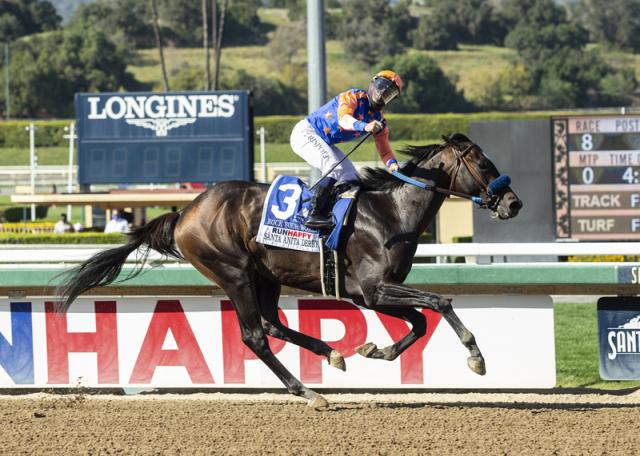