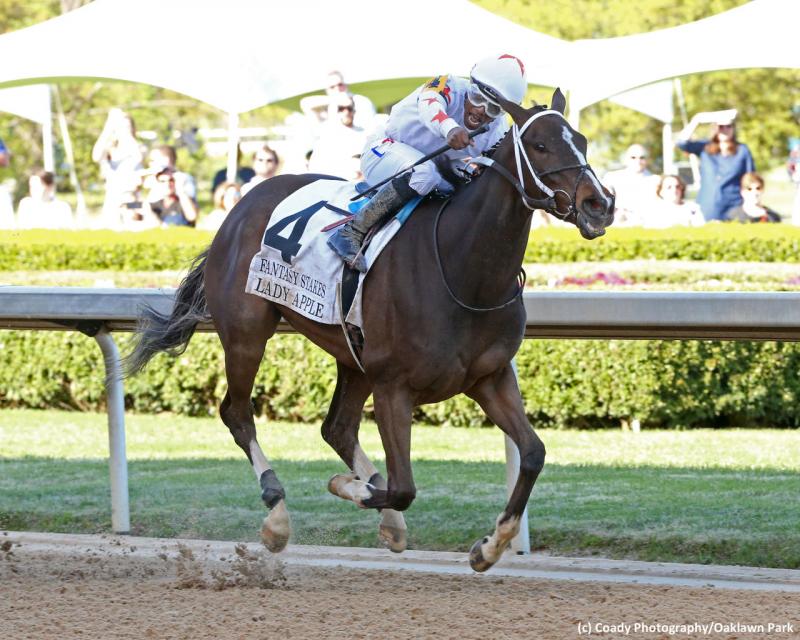 Tight quarters on the rail down the stretch proved no impediment to Lady Apple in Friday’s $500,000 Fantasy S. (G3) at Oaklawn Park, the final qualifier for the Kentucky Oaks (G1). Gamely squeezing through for jockey Ricardo Santana Jr., the Steve Asmussen trainee defeated front-running favorite Motion Emotion to earn her Oaks ticket.

Lady Apple, campaigned by Phoenix Thoroughbred III and breeder KatieRich Stables, was dispatched at a generous 9-1 off maiden and allowance scores over this track. The daughter of Hall of Famer Curlin was perched in a ground-saving spot, in the next flight behind the leaders.

Motion Emotion, who couldn’t quite wire the March 9 Honeybee (G3) here, tried to ration out her early speed more efficiently with new rider Mike Smith. He nursed the 6-5 favorite along, but the pace-prompting Brill stayed in touch to prevent Motion Emotion from having things too comfortable up front.

Turning for home, Motion Emotion came off the rail enough to entice Lady Apple into the opening. But Smith isn’t a Hall of Fame jockey for nothing. In a crafty piece of race-riding, he steered Motion Emotion just enough back toward the inside to make it tight on Lady Apple.

The gambit would have worked, if Motion Emotion had been able to maintain her position. But she drifted out a smidgen again, and Lady Apple didn’t hesitate to seize the gap. Scraping the proverbial paint, she pulled away by a length and banked 100 Oaks points.

“Ricardo gave her a dream trip,” Asmussen said, “and the filly showed tremendous heart. She broke smoothly. He worked out the perfect trip for her. I think the only option was the fence and she showed a lot of heart to go through there.”

Motion Emotion settled for second again, adding 40 points to her overall total of 60. Brill’s third-place effort was good for 20 points, and she now has 22. Another 4 1/2 lengths back in fourth came Orra Moor (10 points for a total of 20), followed by Irish Mischief, Cosmic Code, Super Tap, Destiny Over Fate, K P Slickem, Oxy Lady, and Filly Joel who clipped heels on the clubhouse turn. Kiffle was scratched.

Lady Apple clocked 1 1/16 miles on the fast track in 1:43.88 and rewarded her loyalists with a $21.60 win payout. This first stakes victory improved her mark to 7-3-2-0, $452,200. A near-miss second in last summer’s Astoria S. at Belmont Park, she was fifth in the Schuylerville (G3) and a Saratoga maiden before heading to the sidelines. The bay is three-for-three since resurfacing at Oaklawn.

The Kentucky-bred is out of the Grade 2-placed Miss Mary Apples, by Clever Trick. That makes Lady Apple a half-sister to Grade 2-placed stakes scorer Dr. Diamonds Prize and multiple stakes scorer Miss Red Delicious, who is in turn the dam of Grade 3 winner Nootka Sound. 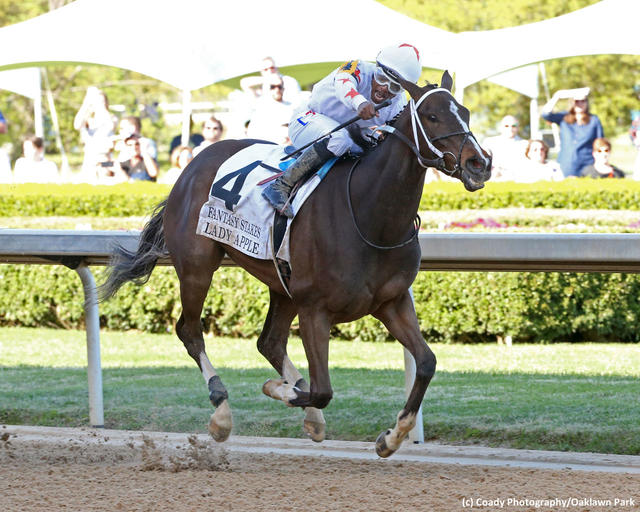