After coming up short as the odds-on favorite in the Lecomte S. (G3), Mandaloun rebounded with the addition of blinkers in Saturday’s $400,000 Risen Star S. (G2) at Fair Grounds, driving to a 1 1/4-length victory.

The 1 1/8-mile Risen Star is the second of three Kentucky Derby qualifiers at the New Orleans track, awarding points on a 50-20-10-5 scale, and Mandaloun likely stamped his ticket while increasing his point total to 52.

Florent Geroux was up on the Juddmonte Farms homebred son of Into Mischief, and Brad Cox noted how the blinkers assisted Mandaloun in his second stakes attempt.

“I think the blinkers did help him,” Cox said. “Much more focused, more focused in the post parade, focused on his job.”

A debut winner at Keeneland in late October, Mandaloun captured a seven-furlong allowance at Churchill Downs a month later in his juvenile finale. The bay sophomore experienced a wide trip when stretching out to two turns for his stakes debut, finishing third in the Jan. 16 Lecomte.

The initial stakes experience benefitted him in the Risen Star, and Cox is excited to see Mandaloun stretch out over longer distances.

“He’s got the physical makeup of a mile-and-a-quarter horse, so we’re optimistic he’ll get better with more ground,” Cox said.

Proxy, who stalked the pace in fourth most of the way, rallied in deep stretch to edge Lecomte winner Midnight Bourbon by a half-length for second. It was another 5 3/4 lengths back to O Besos in fourth.

Kentucky-bred Mandaloun is out of the Group 2-winning Empire Maker mare Brooch. 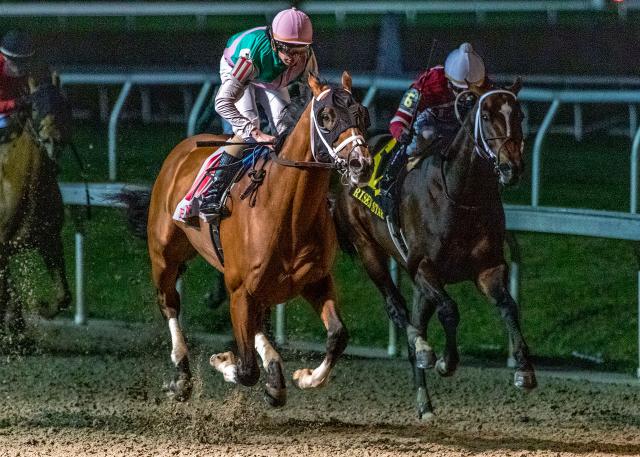