McKinzie much the best in Sham 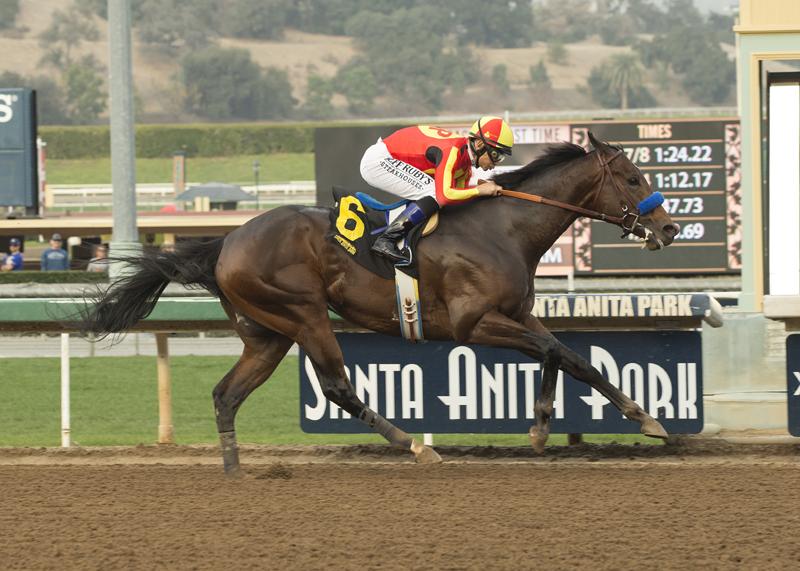 A more relaxed and less keen McKinzie was on display in Saturday's $100,345 Sham (G3) at Santa Anita, and the 1-5 favorite did not disappoint his numerous backers in the one-mile Kentucky Derby (G1) prep.

A tracking fourth under Mike Smith, McKinzie bid to challenge long-time leader All Out Blitz approaching the stretch and drew away from that rival under mild encouragement to register a 3 1/2 length win in a time of 1:36.58 over a fast track.

Owned by Mike Pegram, Karl Watson, and Paul Weitman, the Bob Baffert-trained son of 2007 Kentucky Derby hero Street Sense paid $2.40. All Out Blitz, a 14-1 chance, finished second, four lengths clear of My Boy Jack, with Shivermetimbers a neck behind in fourth.

The Sham was the first time in three starts where McKinzie did not race with blinkers. Last out, in the Los Alamitos Futurity (G1), the colt got caught up pressuring a quick pace and was ultimately run down by stablemate Solomini. However, McKinzie was awarded the victory after Solomini was disqualified for stretch interference.

"He was a bit too aggressive last time. Today, he seemed to relax early, then he jumped when I asked, so taking the blinkers off today, I thought we might as well try it and I think it was a great move," Smith said. "I smooched to him just to keep him interested but going past the wire he was well within himself and galloped out nicely."

With back-to-back Road to the Kentucky Derby series victories, McKinzie has now earned 20 qualifying points toward participation in the May 5 Run for the Roses, each win being worth 10 points. On Saturday, All Out Blitz, My Boy Jack, and Shivermetimbers earned points of four, two, and one, respectively.

A 5 1/2-length debut winner at Santa Anita in late October over seven furlongs, McKinzie has now earned $270,000 from three career starts. He is out of the multiple Grade 2-winning Runway Model, by Petionville.