The once and future king? That’s the role McKinzie wants to stake out for himself, after returning from a six-month layoff to capture Saturday’s $1 million Pennsylvania Derby (G1) at Parx Racing.

Bob Baffert’s leading Kentucky Derby (G1) contender over the winter, McKinzie was shelved by injury, and forced to watch his upstart stablemate Justify win the Triple Crown. If these were human athletes, the sports gossip pages would be filled with tales of jealousy, smack talk, and the urgency of McKinzie to get back in shape and reclaim the spotlight.

With the retirement of Justify, McKinzie won’t have the satisfaction of a head-to-head match-up. But he can seek the mantle of the best three-year-old in training, and he took the first step toward that goal at Parx.

“I always felt like he was the best three-year-old,” Baffert said after the Penn Derby, “and then he got hurt and Justify picked it up.

“He has come back with the time off and has responded really well. It was good to see him get back in the game. It was a pretty tall order to go 1 1/8 miles off that kind of layoff. But you can do it with good horses. I thought we had him pretty tight. I felt like he was the best horse.

“If you had asked me on January 1, I would have told you we were going to win the Kentucky Derby with that horse.”

Karl Watson, Mike Pegram, and Paul Weitman’s runner was dispatched as the 2-1 Penn Derby favorite despite his absence. While bettors had faith that Baffert would have him ready to go, his status arguably reflected some hesitation about how the opposition would stack up against him. Triple Crown veterans Hofburg (5-2), Bravazo (9-2), and Instilled Regard (5-1) were next in the market, and none performed up to expectations in fourth, seventh, and ninth, respectively.

In fact, McKinzie led home a trifecta of horses who did not run in any of the Triple Crown races. The 81-1 longest shot on the board, Trigger Warning, set the early pace before yielding to McKinzie. The 10-1 Axelrod loomed a threat in the stretch, but the favorite had more in reserve. Despite swishing his tail, a longstanding habit, McKinzie held Axelrod safely at bay by 1 3/4 lengths. Trigger Warning tired to a distant third, but still bested the newly blinkered Hofburg.

McKinzie, a son of 2007 Kentucky Derby champion Street Sense, completed 1 1/8 miles in 1:52.05 and gave Hall of Fame jockey Mike Smith a sweep of the $1 million Grade 1s on the card. Smith also took the Cotillion (G1), via disqualification, aboard Midnight Bisou.

Disqualification is a theme running through McKinzie’s resume. Promoted the winner of last December’s Los Alamitos Futurity (G1), he was just as controversially demoted from a hard-fought victory in the March 10 San Felipe (G2), his last start before heading to the sidelines. McKinzie’s other two scores were clear-cut, a 5 1/2-length debut conquest and a 3 1/2-length drubbing in the January 6 Sham (G3). His scorecard now stands at 5-4-1-0, $906,000.

With the comeback out of the way, thoughts turn to future targets, and the prospect of a possible Breeders’ Cup Classic (G1) bid, over the 1 1/4-mile journey at Churchill Downs that he couldn’t try in May. There he would clash with his rival for divisional leadership post-Justify – Travers (G1) romper Catholic Boy – as both face older horses for the first time. 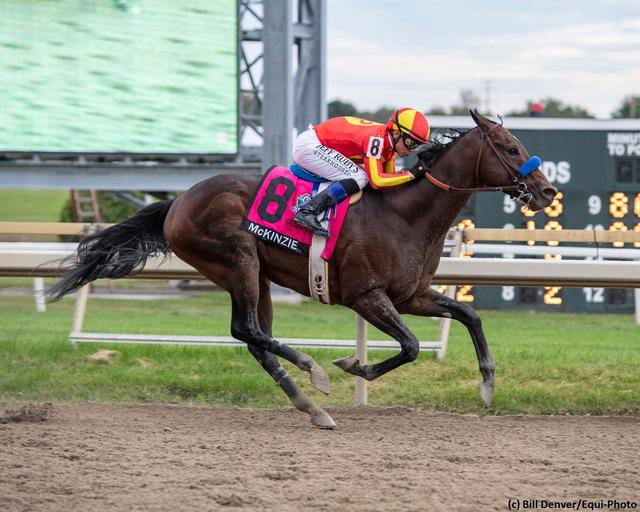