Medina Spirit, a closing second to early Kentucky Derby (G1) favorite Life Is Good in the Sham (G3) earlier this month, looms as perhaps the horse to beat on Saturday in the $100,000 Robert B. Lewis S. (G3) at Santa Anita.

The 1 1/16-mile Lewis offers Road to the Kentucky Derby qualifying points of 10-4-2-1 to the top four finishers. Medina Spirit earned four points in the Sham, in which he finished less than a length behind loose-on-the-lead stablemate Life Is Good.

For the modest purse, the Lewis came up an impressively deep affair. In addition to Medina Spirit, Baffert saddles Spielberg, who nosed out next-out maiden winner The Great One in the Dec. 19 Los Alamitos Futurity (G2).

Trainer Doug O'Neill, who captured the 2012 Lewis with dual classic winner I'll Have Another, has two serious challengers in Hot Rod Charlie, who finished second in the Breeders' Cup Juvenile (G1) at odds of 94-1, and Wipe the Slate, a maiden breaker by more than three lengths on opening day of the Santa Anita winter-spring meet.

Rombauer, second in the American Pharoah (G1) prior to a fifth-place run in the Breeders' Cup Juvenile, looms a threat for a share or more, while Roman Centurian exits a 1 1/16-mile maiden score by more than three lengths.

The relative outsiders in this spot are Parnelli, a distant third in the Sham, and Waspirant, fourth in both the American Pharoah and Sham.

The Robert B. Lewis goes as Race 7 at 6:30 p.m. ET. The race can be watched and wagered on TwinSpires.com. 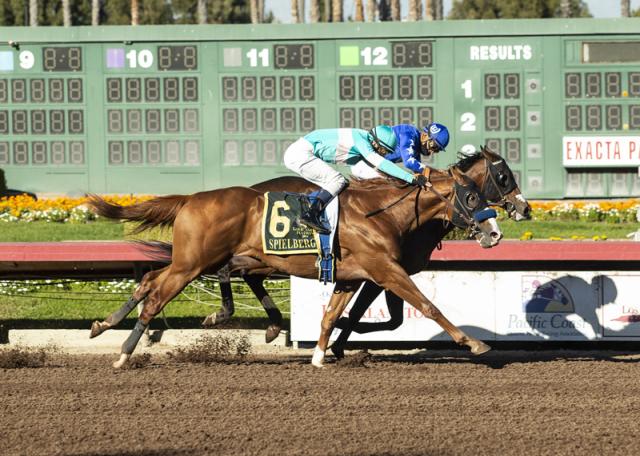