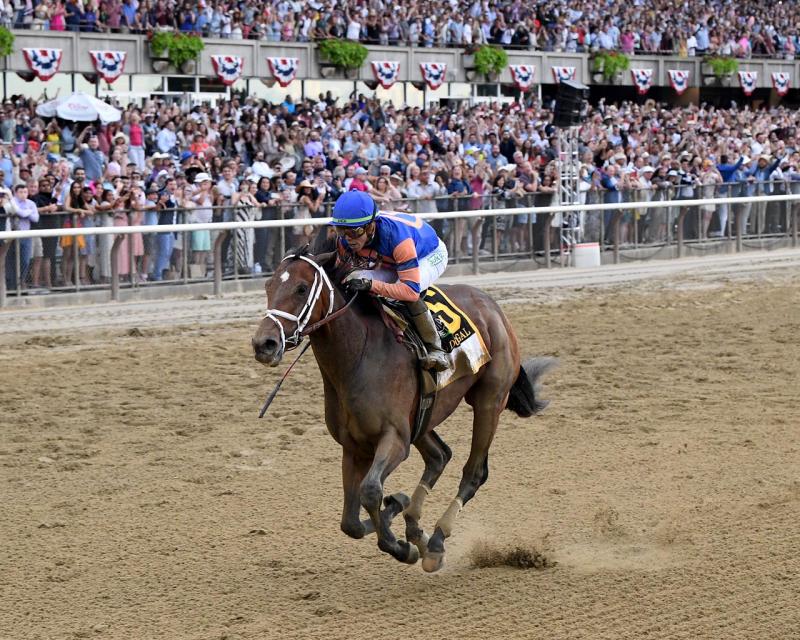 Fifth to Rich Strike in the Kentucky Derby (G1), Mo Donegal turned the tables as the favorite in Saturday’s $1.5 million Belmont S. (G1). The 2.60-1 choice raced in better position at Belmont Park than he had at Churchill Downs, while the 4-1 Rich Strike had a less favorable trip in sixth.

Mo Donegal gave trainer Todd Pletcher his fourth Belmont victory. His stablemate, the filly Nest, rallied to complete the exacta for Pletcher and for their co-owner, Repole Stable. Mo Donegal and Nest have even deeper ties going back to babyhood, both bred by Ashview Farm and Colts Neck Stables.
Campaigned by Donegal Racing in partnership with Repole, Mo Donegal was reserved off the pace, but within comfortable striking distance. The son of champion Uncle Mo gradually improved position down the backstretch with jockey Irad Ortiz Jr.
Meanwhile, We the People was traveling comfortably as expected on the lead, tracked closely by Skippylongstocking. Nest recovered from a stumble at the start to stalk in a ground-saving third, just behind the leaders.
Rounding the far turn, Skippylongstocking challenged We the People, but Mo Donegal was simply breezing into contention. The favorite swept to the front at the top of the stretch, and his stamina came to the fore as he galloped to a three-length decision. Mo Donegal negotiated 1 1/2 miles in 2:28.28.
Nest had to swing out and come around Skippylongstocking and We the People to chase her stablemate home. Although she could not score an historic Belmont win like Pletcher’s champion filly Rags to Riches (2007), Nest did become just the second filly ever to take runner-up honors here. The first was the great Genuine Risk, the 1980 Kentucky Derby heroine who was second in the Preakness (G1) and Belmont.
Nest pulled 3 1/4 lengths clear of Skippylongstocking, who wore down fourth-placer We the People. Creative Minister reported home fifth, followed by Rich Strike, Barber Road, and Golden Glider.
Rich Strike was not helped by the steady pace, so unlike the fast tempo that set it up for him in the Kentucky Derby. Trainer Eric Reed also believed that they made a tactical mistake by trying to race wider out, rather than sticking to his usual inside style.
Mo Donegal has bankrolled $1,511,800 from a 7-4-0-2 record. All three of his marquee wins have come in New York. In last fall’s Remsen (G2) at Aqueduct, he outdueled Zandon, and over the same track and trip in the Wood Memorial (G2), he nabbed Early Voting. That result took on added significance when Early Voting came back to win the Preakness.
In keeping with Pletcher’s preferred pattern, Mo Donegal skipped the middle jewel to prepare for the Belmont. The bay delivered for his co-owners who were savoring their first Belmont win. Donegal Racing had come closest with Keen Ice (third in 2015), ironically the sire of Rich Strike. Repole just missed in 2011 with Stay Thirsty. Ortiz was winning his second Belmont, after Creator (2016).
Pletcher has now joined mentor D. Wayne Lukas and fellow Hall of Fame trainer Max Hirsch as four-time Belmont winners. In addition to Rags to Riches and Mo Donegal, Pletcher sent out Palace Malice (2013) and Tapwrit (2017).
Only four horsemen in history have trained more – James C. Rowe (the record of eight), Sam Hildreth (seven), Sunny Jim Fitzsimmons (six), and Woody Stephens (an incredible five in a row).