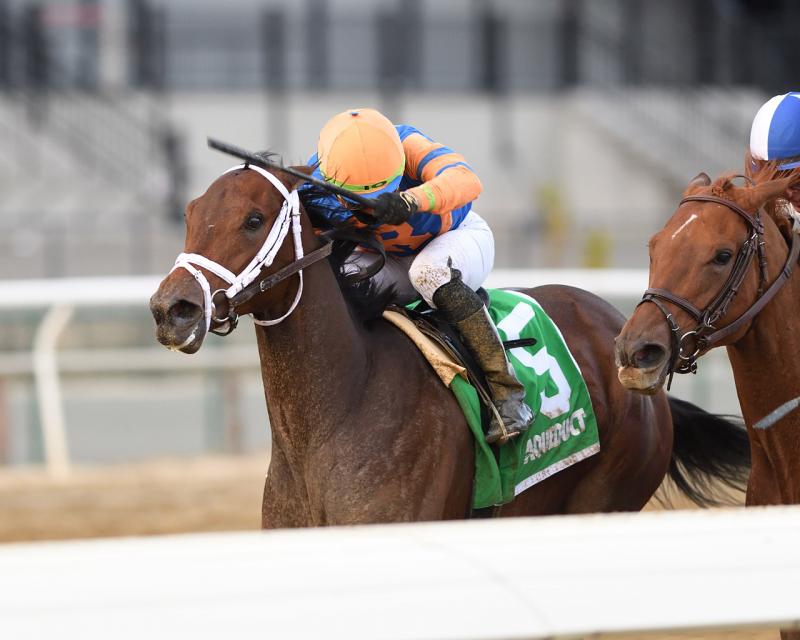 Despite a wide trip at Aqueduct, 1.75-1 favorite Nest kept grinding her way to get up in Saturday’s $250,000 Demoiselle (G2). The Todd Pletcher filly had to survive an objection, like stablemate Mo Donegal in the Remsen (G2) one race earlier, to earn her 10 points toward the Kentucky Oaks (G1).

Co-owned by Repole Stable, Eclipse Thoroughbred Partners, and Michael House, Nest was making her two-turn debut after a rallying third in the Tempted S. at Belmont Park. The daughter of Hall of Famer Curlin was well suited by the step up in trip, although she went farther than she bargained for when hung out wide throughout the 1 1/8-mile affair.
Nest was reserved a couple of lengths off the pace set by Magic Circle, the Tempted runner-up, who got away with slow fractions. In midstretch, Magic Circle veered out into the path of the chasing Venti Valentine. A chain reaction ensued as Venti Valentine was forced out toward the oncoming Nest.
But Nest steadily maintained her bid to overtake Magic Circle. Venti Valentine, in between them, gamely came again herself in the three-way tussle. Nest proved stronger by a neck in a final time of 1:55.07. Venti Valentine was runner-up by three-quarters of a length from the tiring Magic Circle.
Venti Valentine’s rider, John Velazquez, claimed foul against Irad Ortiz Jr. on Nest. Those were the same jockeys involved in the Remsen skirmish, where Velazquez lodged an objection against Ortiz on Mo Donegal. The Demoiselle had less substance than the Remsen incident, however, as Nest’s slight leaning didn’t appear consequential to the outcome.
Nest’s victory was declared official, improving her resume to 3-2-0-1, $205,000. In another parallel to Remsen-winning stablemate Mo Donegal, Nest was also bred by Ashview Farm and Colts Neck Stables in Kentucky. The $350,000 Keeneland September yearling purchase is a full sister to current Santa Anita H. (G1) winner Idol. Their dam, Marion Ravenwood, is herself a daughter of A.P. Indy and Grade 2 victress Andujar.
Aside from Nest joining the Oaks leaderboard, Venti Valentine picked up her first four points. Magic Circle added two points, for a total of three (including her point for fourth in the Frizette [G1]). Nostalgic made some headway from last to take fourth, opening her account with one point.
Pletcher was extending his record number of Demoiselle wins to seven. Two of those past winners went on to land the Kentucky Oaks, Hall of Famer Ashado and last year’s Demoiselle star, Malathaat.
Across the country at Los Alamitos on Saturday, Bob Baffert was likewise maintaining his dominance of the $300,500 Starlet (G1). His 11-10 favorite Eda battled back to hand Baffert his eighth Starlet, and fifth in a row. But she was ineligible to earn any Oaks points, since her trainer is suspended by Churchill Downs Inc.
Eda was facing a distance question after showing high speed to win her past two sprint stakes, the Anoakia S. at Santa Anita and Desi Arnaz S. at Del Mar. The Baoma Corp. colorbearer was helped by a softer pace scenario here, and her narrow decision suggests she might not want any more than this 1 1/16-mile trip.
Breaking on top with Juan Hernandez, Eda deferred to stablemate Benedict Canyon and tracked down the backstretch. The favorite took charge entering the far turn, only to meet a stiff challenge in the lane. Tonito’s rallied between Eda and Benedict Canyon and struck the front. Eda found more to regain the advantage, then had to dig in when Cairo Memories gained on the outside.
At the wire, Eda had a half-length to spare over Cairo Memories, who garnered four Oaks points in her first dirt try. Another neck back came Tonito’s in third, worth two points. Desert Dawn checked in fourth, good for one point that increased her total to three (including two from her third in the Chandelier [G2]). Benedict Canyon wound up fifth, and the other Baffert runner, Grace Adler, was eased across the line.
Eda, who clocked 1:44.51, sports a mark of 6-4-1-0, $370,000. The near-misser in the Sorrento (G2) in her stakes debut, she faded to fifth, after a torrid pace duel, in the Del Mar Debutante (G1). She’s bounced back to win three straight.
The Munnings filly was bred by Nathan McCauley in Kentucky and initially sold for $240,000 as a Keeneland September yearling. The bay went to her current connections for $550,000 at OBS in March. Her dam, the Lemon Drop Kid mare Show Me, is herself a half to speedy Grade 3 scorer Aegean. 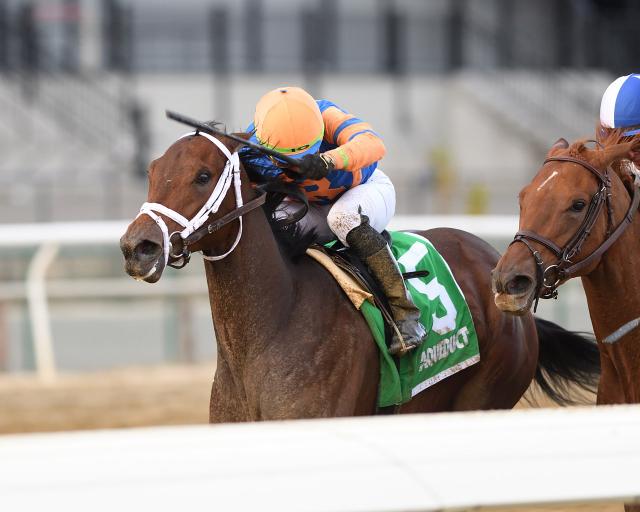