Tales from the Crib: Patch

If you’re on the lookout for a sentimental rooting interest, especially one who’s had to overcome adversity, Patch qualifies. He’s one of a trio of 2017 Kentucky Derby (G1) hopefuls for historic Calumet Farm, along with Sunland Derby (G3) hero Hence and former “bubble” horse Sonneteer (who got the couple of defections he needed to get into the field).

Like Hence and Sonneteer, Patch was purchased in utero. His dam, Windyindy, was carrying her Union Rags foal when Calumet went to $180,000 for her at the 2013 Keeneland November Breeding Stock Sale.

In another similarity to Hence, Patch is out of a well-related A.P. Indy mare. Windyindy’s dam is Unbridled Wind, a stakes-winning full sister to champion and $2.7 million-earner Banshee Breeze.

At the time of sale, Windyindy had produced one runner, a filly by Tiznow named Tiz Windy, who’d yet to break her maiden. But the next year, Tiz Windy would make good, and make her dam into an even more promising young broodmare.

On March 18, 2014, Windyindy foaled her bay colt. And 12 days later, Tiz Windy broke her maiden at Gulfstream Park. As her Union Rags baby grew, so did her three-year-old daughter Tiz Windy progress over the course of the season, culminating in a victory in the Indiana Oaks (G2).

Along with the other Calumet prospects, the Union Rags colt learned his early lessons in how to be a racehorse from Ian Brennan at the Stonestreet Training Center near Ocala, Florida. Then in the spring of 2016, he was shipped off to trainer Todd Pletcher to prepare for his racetrack debut. 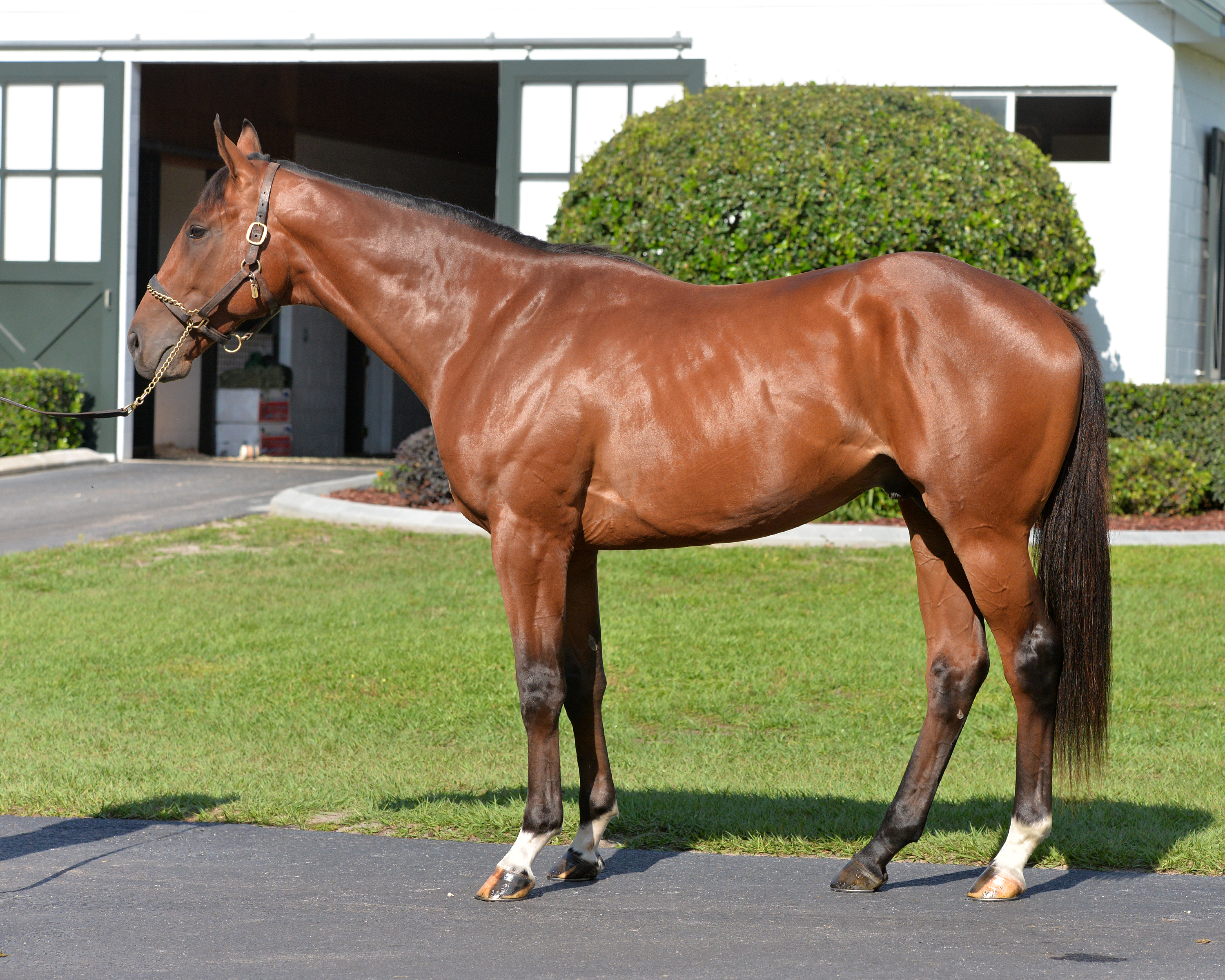 But it soon became more apt than anyone could have imagined, giving rise to an accidental double-entendre.

For poor Patch was about to lose his left eye.

“As a two-year-old, he developed an ulcer that would not clear up even with the best of care, so they had to remove the eye,” Kane said.

“It’s a mystery,” Pletcher said. “No one knows exactly how it happened.

“We led him out of his stall one morning, and the eye was swollen shut, with a lot of tearing. There was no evidence of any trauma, or scratches or scrapes, so no evidence of him getting cast in his stall.

“The vet came out and looked at it, treated it. Did all the normal stuff at the barn for a week. We felt like it was improving for the first few days, then it started not responding.”

Patch was transported to Rood & Riddle Equine Hospital in Saratoga, where his medical team did everything they could for another week to try to save the eye, to no avail.

“There was a lot of inflammation in the globe of the eye,” Pletcher said. “They never really knew why it wouldn’t respond.”

As his trainer explained, only a biopsy, performed after the eye had been removed, could have provided an answer. But since the eye was “unsalvageable” anyway, it wasn’t judged necessary to pursue it.

Now Patch had to learn how to cope with life, and his impending racing career, without his left eye.

“We sent him down to my dad’s farm so he could adjust to training with one eye,” Pletcher said.

Todd’s father, J.J. Pletcher, is a veritable institution himself with more than a half-century of experience as a horse trainer. In 1999, the elder Pletcher established the Payton Training Center near Ocala, where he has developed a host of top performers, many of them future stars for Todd.

It would have been understandable for Patch to have some initial trouble because of his plight, but the remarkable thing was, he didn’t. Patch handled the situation so well that he never missed a beat, to J.J.’s astonishment.

“He was impressed and amazed with him,” Pletcher said of his father’s reaction.

So Patch was good to go back into the regular training routine. Only by this time, summer had gone, and he’d missed the whole Saratoga meet. He accordingly joined Pletcher’s squad at Palm Beach Downs, his winter base, and resumed working in October.

Patch is “unfazed,” Pletcher notes, so you can’t tell that he’s lost an eye. It’s not been a detriment to his budding career.

“It seems like the ones that have lost an eye really early end up coping better,” his trainer added.

Pletcher would know, since one of his past standouts, Pollard’s Vision, went blind in his right eye as a yearling. Indeed, his name is an explicit reference to his condition – an allusion to Seabiscuit’s jockey, Red Pollard, who had likewise lost his sight in one eye. Pollard’s Vision was well used to it before he ever began training toward his career. And a productive one it was. An earner of more than $1.4 million, he won the Illinois Derby (G2), and placed third in the Louisiana Derby (G2) before competing in the 2004 Kentucky Derby.

Another past Derby participant, Cassaleria (1982), lost his left eye after injuring it in his first stumbling steps as a newborn. But he too compiled a successful career as a multiple graded stakes winner of $525,662.

“Cassaleria didn’t know what he was missing, since he was practically born with only one eye,” Hall of Fame trainer Ron McAnally told the Los Angeles Times’ Bill Christine.

Patch has certainly raced with gusto in all three of his starts, showing the same pluck whether on the outside at Gulfstream Park or the inside at Fair Grounds, where he finished second in the Louisiana Derby – one spot better than Pollard’s Vision did 13 years ago.

If Patch has no problem racing with one eye, the only Derby-related concern is that his eye problem cost him his entire juvenile season. Otherwise he would have received more of a foundation, that seasoning and racetrack experience so essential to Derby success. After all, you’ve got to go back to Apollo in 1882 to find the last Derby winner who didn’t race at two.

But Pletcher won’t be led down the primrose path of what-might-have-been.

“Maybe it was a blessing in disguise,” he said, adding that you never know how things might have worked out.

Kane likewise keeps it all in proper perspective, preferring to look ahead.

“He has shown a lot of determination in his races, and we are excited to see what he does in his next.”

Photos of Patch, before he lost his left eye, courtesy of Stonestreet 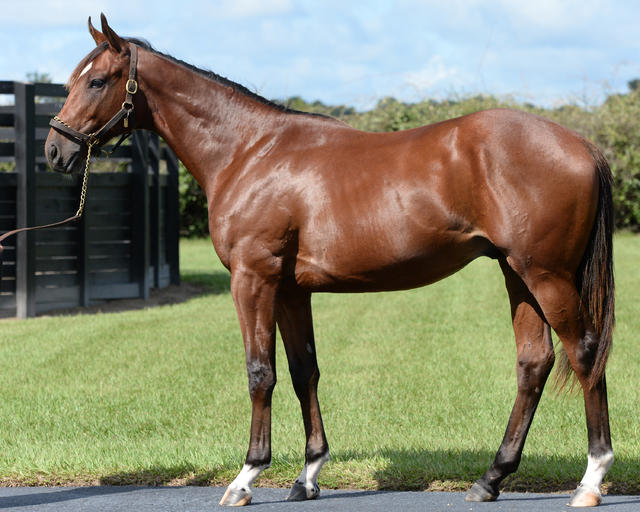