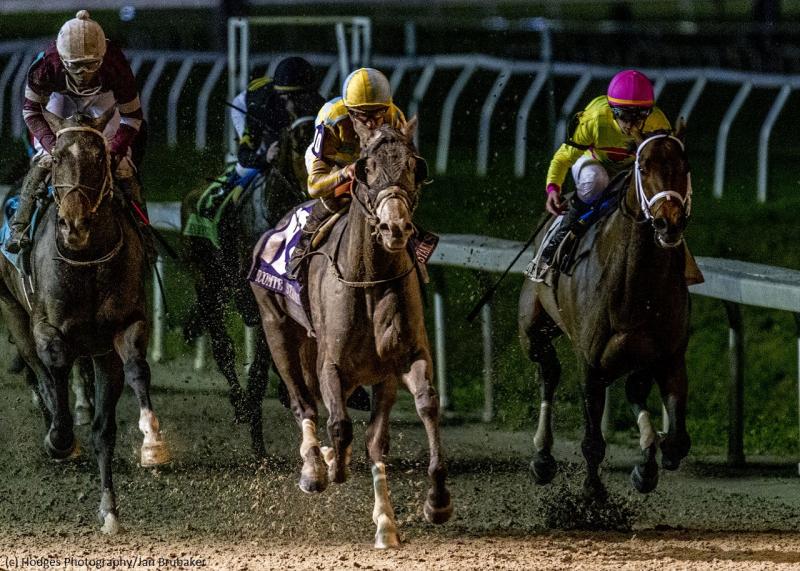 With his victory in Saturday’s Lecomte (G3) at Fair Grounds, Enforceable became a remarkable fourth graded stakes winner produced by his dam. The other three have all been involved, to greater or lesser degrees, on the Kentucky Derby (G1) trail, including full brother Mohaymen.

Their dam, Justwhistledixie, was herself a smart performer on the 2009 Kentucky Oaks (G1) trail. The winner of five straight including the Davona Dale (G2) and Bonnie Miss (G2), Justwhistledixie was regarded as the leading danger to Rachel Alexandra – until a foot issue forced her to scratch. Rachel Alexandra went on to crush the Oaks by a record margin of 20 1/4 lengths, conquered the boys in the Preakness (G1), and compiled a Horse of the Year campaign that sent her to the Hall of Fame.

Justwhistledixie wasn’t going to touch Rachel Alexandra, but her setback cost her the reasonable chance of finishing best of the rest in the Oaks. She placed second in her two remaining starts of the season, the Acorn (G1) and Top Flight (G3), and retired after a lackluster trio of fourths in early 2010.

Aside from her talent on the racetrack, Justwhistledixie brought a fine pedigree to the breeding shed. She’s by Dixie Union, who won Grade 1s from 7 furlongs (the Malibu) to 1 1/8 miles (the Haskell), and sired 2012 Belmont (G1) hero Union Rags. Justwhistledixie’s female line is deep too. Her half-brother, 2006 Saratoga Special (G2) winner Chace City, sadly passed away before he could fulfill his abundant promise. Further in the family, her maternal relatives include current multiple Grade 1 winner Got Stormy, an Eclipse Award finalist for champion turf female.

Justwhistledixie began her broodmare career by visiting Street Cry (sire of Zenyatta and Winx), and the resulting foal, New Year’s Day, captured the 2013 Breeders’ Cup Juvenile (G1). Before he could advance on the Derby trail, however, New Year’s Day sustained a career-ending injury late that year. He went on to sire Maximum Security, disqualified from his first-past-the-post finish in the 2019 Kentucky Derby but an early favorite to be honored as champion 3-year-old male.

Next Justwhistledixie was courted by Distorted Humor (sire of 2003 Derby and Preakness champ Funny Cide). This second foal, Winslow, was arguably unfortunate not to make an impact in stakes. Based with Godolphin in England, he broke his maiden handsomely at Haydock over Baitha Alga, the eventual winner of Royal Ascot’s Norfolk (G2). But Winslow was sidelined for a few months and never won again.

Justwhistledixie was then married to leading sire Tapit. Their son Mohaymen was among the top 2016 Derby contenders. Unbeaten in his first five starts as he racked up wins in the Nashua (G2), Remsen (G2), Holy Bull (G2), and Fountain of Youth (G2), the gray finished fourth to Nyquist in both the Florida Derby (G1) and Kentucky Derby.

Mohaymen’s younger full brother, the bay Kingly, has spent more time on turf and Golden Gate Fields’ Tapeta surface than dirt. He tried one scoring race on the road to the 2019 Kentucky Derby, finishing a distant second in the El Camino Real Derby. But the speedy type scored his first stakes win next out in the California Derby, and last summer, he wired the La Jolla (G3) on the Del Mar turf.

Enforceable, the third full brother in the sequence, is a gray like Mohaymen. But he might end up having more scope to improve over time. The Lecomte represented a significant step forward from his prior stakes efforts, a third in the Breeders’ Futurity (G1) and a fourth in the Kentucky Jockey Club (G2).

The match of Tapit and Justwhistledixie offers intriguing pedigree patterns. Tapit descends from the male line of 1977 Triple Crown legend Seattle Slew, who also appears in the dam’s side of Justwhistledixie’s sire, Dixie Union. Also duplicated are breed-shaping sire Northern Dancer, the 1964 Derby and Preakness star, and Mr. Prospector. Perhaps the most interesting angle is the appearance of Relaunch (on Justwhistledixie’s side) and his full sister Moon Glitter (ancestress of Tapit) – a pattern of doubling up on a superior female known as the “Rasmussen Factor.”

Enforceable traces to the maternal family labeled 8-c, the same line responsible for the great Ruffian as well as Derby winners Fusaichi Pegasus (2000) and Orb (2013). 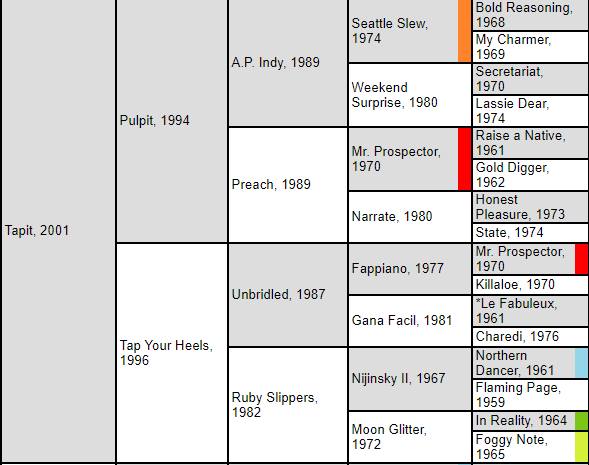 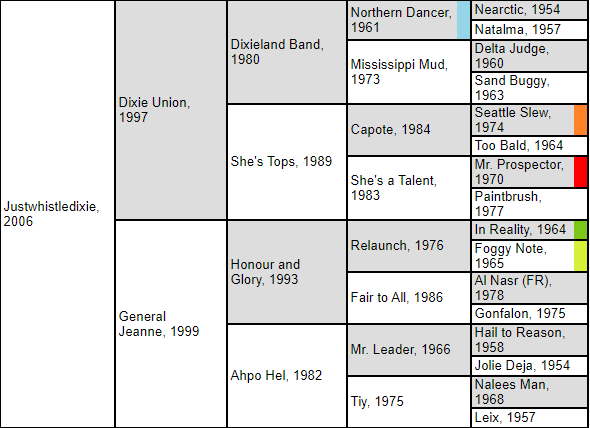