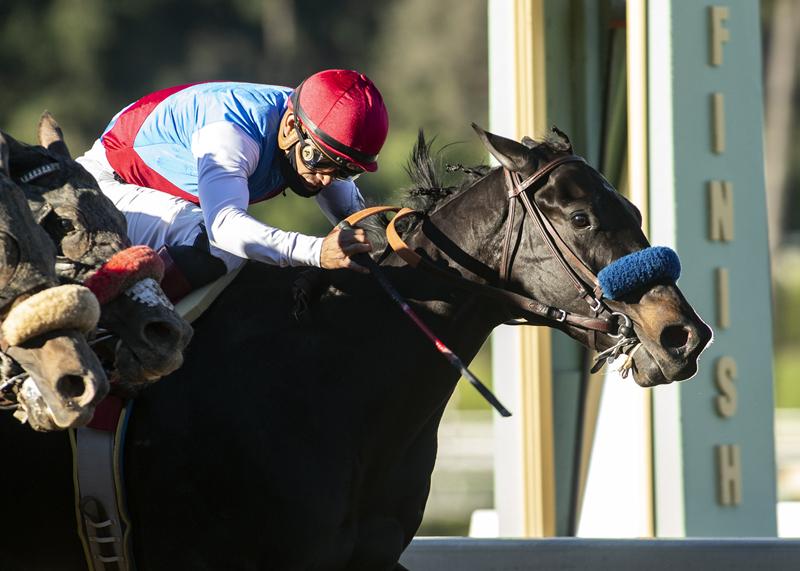 When Medina Spirit dug in gamely to withstand all comers in the Jan. 30 Robert B. Lewis (G3), he was expressing tenacity reminiscent of grandsire Giant’s Causeway – and a more distant ancestor, Wild Again.

Medina Spirit’s pedigree isn’t fashionable up front, as implied by the bidding in both of his sales appearances. Sold for a paltry $1,000 as a yearling, he brought $35,000 as a two-year-old in training.
That’s because his first-crop sire, Protonico, wasn’t very commercial. The four-time graded stakes winner scored his marquee victory in the 2015 Alysheba (G2), where he channeled the fighting spirit of his sire Giant’s Causeway, and left Honor Code back in fifth. Protonico earned just shy of $1 million, but didn’t win a Grade 1, although he was runner-up in the 2014 Clark H. (G1) (with Constitution third) and also placed in the 2016 Jockey Club Gold Cup (G1) in his final start. In the hotly competitive stallion world, he isn’t flashy, and thus stands for a low fee of $5,000. 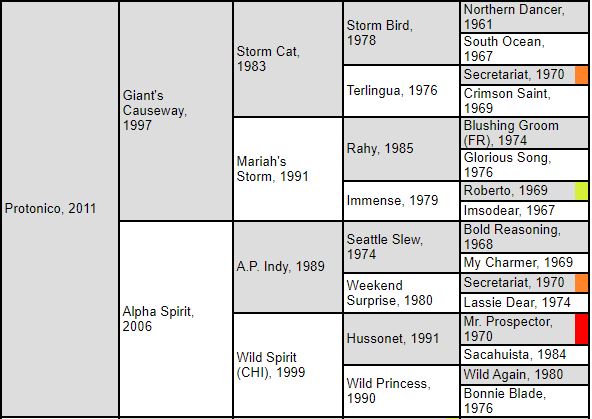 Yet Protonico sports fine bloodlines. Sire Giant’s Causeway earned the moniker of “Iron Horse” after battling to five straight Group 1 wins in the summer of 2000. One of the best ever trained by Irish maestro Aidan O’Brien, Giant’s Causeway was just outdueled by Hall of Famer Tiznow in the Breeders’ Cup Classic (G1).

From the Northern Dancer male line, Giant’s Causeway has imparted more stamina than typical for the branch established by his own sire, Storm Cat. Giant’s Causeway has yet to sire a U.S. classic winner, but sons have placed in all three jewels of the Triple Crown. Destin came closest in a 2016 Belmont S. (G1) heartbreaker, while Creative Cause was third in the 2012 Preakness (G1), and Mr. Big News filled that spot in last year’s Kentucky Derby (G1).

Protonico’s dam, Alpha Spirit, is a daughter of Hall of Famer A.P. Indy and Wild Spirit, a Chilean star who proved top-class in her U.S. campaign as well. Wild Spirit captured the 2003 Ruffian H. (G1) and romped over Take Charge Lady in that summer’s Delaware H. (G2). In her lone start of 2004, she placed to Azeri in the Apple Blossom H. (G1).
Wild Spirit is a granddaughter of two Breeders’ Cup winners. Her sire, the Mr. Prospector stallion Hussonet, is out of 1987 Distaff (G1) champion Sacahuista. Wild Spirit’s dam is by Wild Again, who famously fended off Slew o’ Gold and Gate Dancer in the inaugural Breeders’ Cup Classic in 1984, a finish echoed by Medina Spirit in the Lewis. 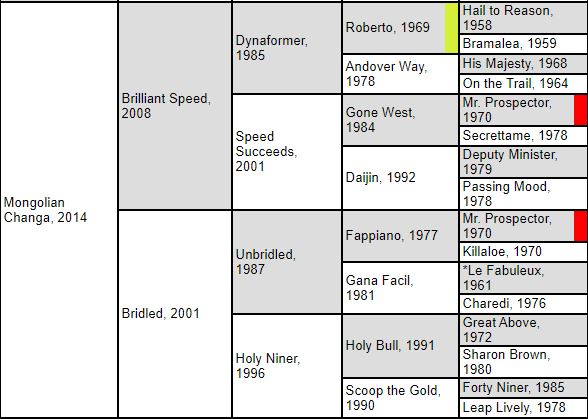 Medina Spirit’s dam, Mongolian Changa, is by Brilliant Speed, a stallion vaguely like Protonico in that he was a millionaire on the racetrack but not commercially appealing at stud. By Dynaformer – the sire of 2006 Kentucky Derby legend Barbaro – Brilliant Speed spent most of his career on the grass and placed third to St Nicholas Abbey in the 2011 Breeders’ Cup Turf (G1). Earlier in that sophomore season, Brilliant Speed dabbled on the Triple Crown trail, prevailing in the Blue Grass (G1) on Keeneland’s old Polytrack and taking third in the Belmont.

Although Mongolian Changa’s immediate family was light on black-type, a few major stallions are prominent in her ancestry. She’s out of a mare by 1990 Kentucky Derby and Breeders’ Cup Classic champion Unbridled, and the next dam in the sequence is by Hall of Famer Holy Bull.

Scoop the Gold is herself out of multiple Group 3 queen Leap Lively. A daughter of the last English Triple Crown winner, Nijinsky II, Leap Lively placed in the 1981 Epsom Oaks (G1) and Yorkshire Oaks (G1). She went on to produce champion filly Forest Flower, victorious in the 1987 Irish 1000 Guineas (G1). Leap Lively is also the ancestress of Catch a Glimpse, the Canadian Horse of the Year when winning the 2015 Breeders’ Cup Juvenile Fillies Turf (G1).
Medina Spirit traces to the family numbered 2-n, still looking for its first Kentucky Derby winner, but a venerable line whose European representatives include all-time great *Sea-Bird II. 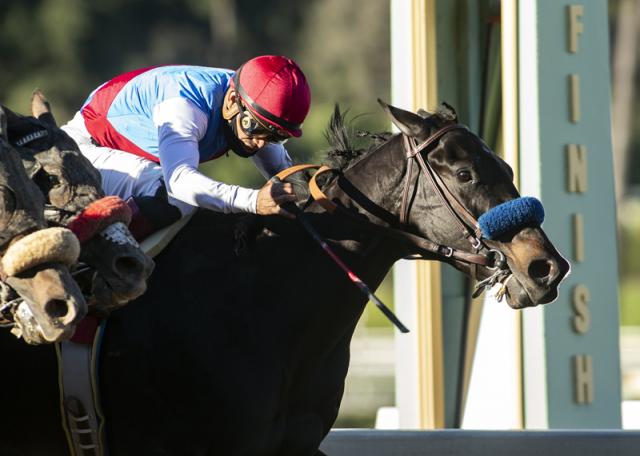