Rock Your World’s successful move from turf to dirt is no surprise, given the surface versatility encoded in his ancestry.

Both of his parents were trained by Hall of Famer Ron McAnally, who also co-bred Rock Your World with his wife, Deborah. Indeed, Rock Your World represents the fourth generation of a female line developed by Mrs. McAnally.

Rock Your World is by undefeated Argentine champion Candy Ride. Imported after a trio of stunning victories in his homeland, including the Joaquin de Anchorena (G1) in a brilliant 1:31.01 for a metric mile on turf, Candy Ride remained perfect in his three U.S. starts in 2003. He reverted to dirt for his successful debut for McAnally, then switched to turf to take the American H. (G2). Back on the main oval for the Pacific Classic (G1), Candy Ride beat Medaglia d’Oro while setting a 1 1/4-mile mark at Del Mar in 1:59.11.

Candy Ride descends from the Mr. Prospector male line via Fappiano’s son Cryptoclearance. A stalwart on the 1987 Triple Crown trail, Cryptoclearance captured the Florida Derby (G1), finished fourth in the Kentucky Derby (G1), third in the Preakness (G1), and second in both the Belmont (G1) and Travers (G1). The confirmed closer kept adding to his resume as an older horse, with major wins including the 1989 Donn H. (G1) and Widener H. (G1), and he ultimately banked more than $3.3 million from 44 career starts.

Another son, Ride the Rails, was a lesser player on the 1994 Derby trail. Second to Hall of Famer Holy Bull in the Florida Derby, Ride the Rails was also third in the Fountain of Youth (G2) and fourth in the Arkansas Derby (G2).

His race record didn’t mark him out as a hot stallion prospect, and Ride the Rails was exported to Argentina. But he did sport an intriguing pedigree pattern. His dam, Herbalesian, is a granddaughter of Alablue, who won the 1948 Test at Saratoga and became an influential broodmare. Cryptoclearance is himself one of Alablue’s descendants, so Ride the Rails is inbred to that key matron. 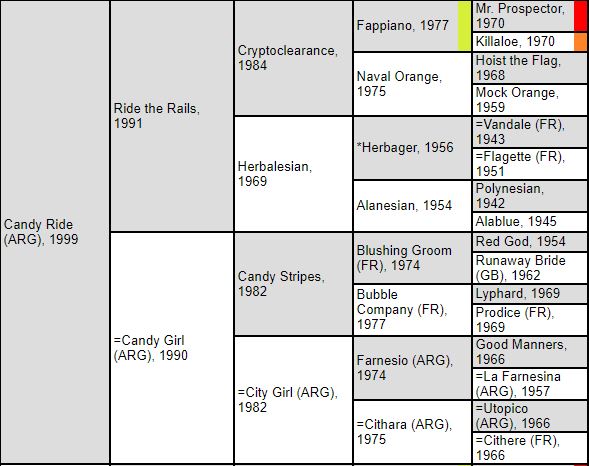 Perhaps the genetic kaleidoscope scrambled just right for Ride the Rails to sire Candy Ride, a superior individual both on track and at stud. Candy Ride is responsible for 2017 Horse of the Year Gun Runner, the 2016 Kentucky Derby runner-up who blossomed as an older horse with romps in the Breeders’ Cup Classic and Pegasus World Cup (G1); champion juveniles Game Winner and Shared Belief, who was later victorious in the Pacific Classic and Santa Anita H. (G1); triple-surface threat Twirling Candy (now the sire of Derby candidate Dream Shake); and unbeaten Mastery, a leading 2017 Derby contender before sustaining a career-ending injury.

Rock Your World has a notable duplication in his own pedigree, with Candy Ride’s male-line ancestor Fappiano factoring in the pedigree of dam Charm the Maker as well. Charm the Maker descends from Fappiano’s greatest son, Unbridled.

Charm the Maker was herself twice Grade 1-placed as a juvenile on dirt and synthetic. A half-length second in the 2011 Hollywood Starlet (G1), she captured the Sharp Cat over the same Cushion Track at old Hollywood Park and finished third in Santa Anita’s Oak Leaf (G1) (now the Chandelier). The McAnally trainee was also stakes-caliber on turf, notably placing a close second in the Unzip Me (to Byrama, now the dam of Derby contender Known Agenda) and third in the Autumn Miss (G3) in 2012. Charm the Maker added another stakes score to her resume in the 2013 Adoration over Del Mar’s then-Polytrack surface.

Charm the Maker is the first foal from Grade 3 winner Charm the Giant, who was likewise trained by McAnally for his wife. Charm the Giant competed exclusively on turf, winning or placing in 11 of 15 starts. Her signature win came in the 2007 Wilshire H. (G3) at Hollywood Park. Charm the Giant is also the dam of Liam the Charmer, hero of the 2018 John Henry Turf Championship (G2). Although he raced for other connections, it was still heartwarming to see a McAnally-bred take the prize honoring the trainer’s most beloved champion.

As her name implies, Charm the Giant is by European superstar Giant’s Causeway and out of the McAnallys’ multiple Grade 2 vixen Olympic Charmer.

Giant’s Causeway earned his “Iron Horse” nickname after battling to five straight Group 1 victories in the summer of 2000. American fans remember his near-miss to Tiznow in that fall’s Breeders’ Cup Classic, his lone try on dirt. The son of Storm Cat became an outstanding sire as well, with such progeny as 2019 U.S. Horse of the Year Bricks and Mortar and European champion Shamardal (a top stallion himself). Giant’s Causeway factors as the broodmare sire of the aforementioned Gun Runner (by Candy Ride).

Olympic Charmer, second to future Grade 1 queen Honest Lady on debut, garnered the 1999 Railbird (G2) and 2000 El Encino (G2) for the McAnallys. Although her biggest highlights were on dirt, Olympic Charmer was 2-for-2 on turf, both in minor stakes at Santa Anita.

The first in the matrilineal series of McAnally homebreds, Olympic Charmer is by millionaire Olympio, who was trained by McAnally for owner/breeder Verne Winchell. Olympio was himself effective on both surfaces, scoring several majors on the main track led by the 1991 Arkansas Derby (G2) and earning the Grade 1 laurel in the Hollywood Derby (G1) on turf.

Rock Your World’s fourth dam, Light a Charm, is a half-sister to Herecomesthebride who has a Grade 3 stakes named after her on the Gulfstream Park turf. Herecomesthebride, herself a Grade 3 winner of 12 of 16 starts, is yet another with stakes trophies on both dirt and turf.

Light a Charm’s sire, Majestic Light, adds to the constant refrain with his marquee wins spanning surfaces. By 1969 Kentucky Derby and Preakness hero Majestic Prince, Majestic Light captured the 1976 Monmouth Invitational H. (G1) (in track-record time) and Swaps (G1) as well as the 1977 Amory L. Haskell H. (G1) on dirt. His biggest turf score came in a romp in the 1977 Man o’ War (G1), but the Phipps homebred also landed that summer’s Bernard Baruch H. (G3) at Saratoga and the Cinema H. (G2) as a sophomore. Majestic Light was runner-up in the Washington DC International (G1), Turf Classic, and Canadian International (G1) (to the magnificent Exceller).

Light a Charm’s dam, Like a Charm, won all three career starts highlighted by the 1966 Sorority. Her descendants include Country House, the promoted winner of the 2019 Kentucky Derby via the disqualification of Maximum Security.

Aside from Country House, this family labeled 9-f is also responsible for 1976 Kentucky Derby and Belmont champion Bold Forbes, at a further remove. Current Derby rivals Known Agenda and Like the King trace to the 9-f tribe too in their tail-female line. 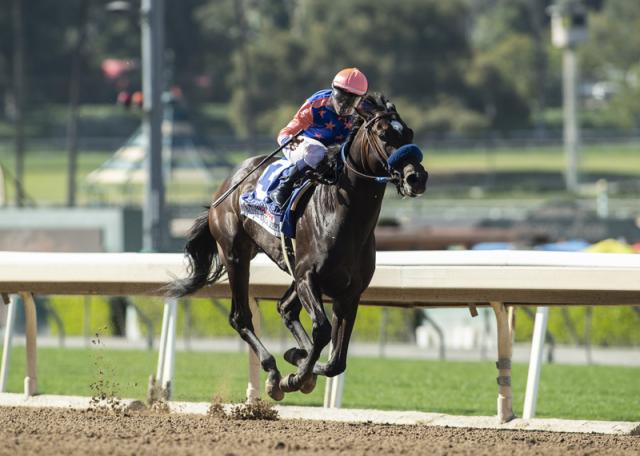