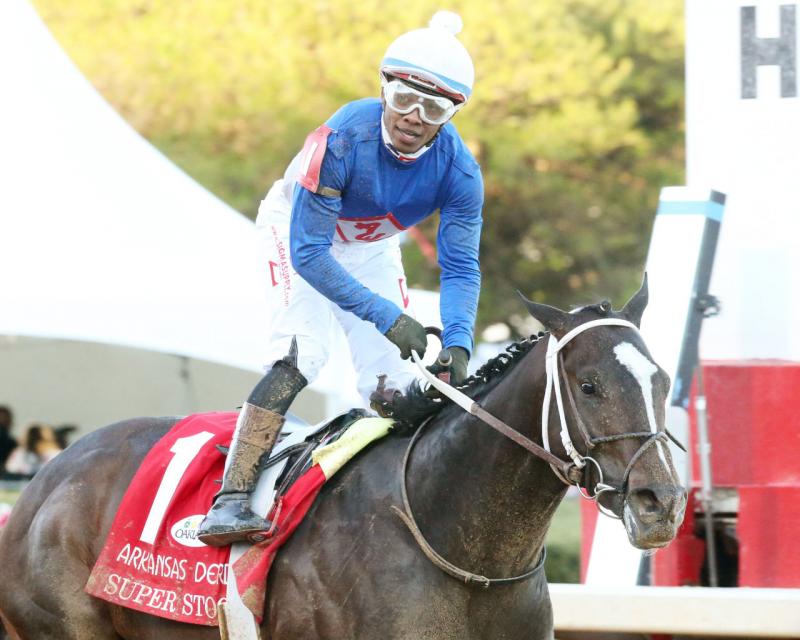 Super Stock's sire was a beaten Derby favorite, and his broodmare sire just missed the roses at 71-1 (Coady Photography)

Super Stock will try to wear the roses that eluded both his sire and broodmare sire in their respective attempts in the Kentucky Derby (G1).

Super Stock’s sire, Dialed In, ranked as the lukewarm 5-1 favorite here in 2011 after late-running heroics in the Holy Bull (G3) and Florida Derby (G1). But he was too far back early to get any closer than eighth behind Animal Kingdom.
From the sire line of 1977 Triple Crown star Seattle Slew and his Hall of Fame son, A.P. Indy, Dialed In is by Mineshaft, the 2003 Horse of the Year. Mineshaft sired the runner-up in Dialed In’s Derby, Nehro, as well as Fly Down, second in the 2010 Belmont S. (G1) and Travers (G1) where he missed by a whisker. Other notables by Mineshaft include $3.3-million earner Effinex and multiple Grade 1-winning millionaire It’s Tricky.
Dialed In himself sired a prominent contender on the 2017 Triple Crown trail in Gunnevera. Although the multiple Grade 2 hero was unplaced in the Derby and Preakness (G1), Gunnevera later placed in such major events as the Travers, Breeders’ Cup Classic (G1), Pegasus World Cup (G1), and Dubai World Cup (G1) while bankrolling more than $5.5 million.
In addition to Super Stock, Dialed In could have another chance on the first Saturday in May in Get Her Number. Last fall’s American Pharoah (G1) winner, Get Her Number was fourth to Super Stock in the Arkansas Derby (G1) and currently sits “on the bubble” just outside the Derby top 20.
Dialed In is also capable of siring one-turn specialists like Chalon, who came within a head of taking the 2018 Breeders’ Cup Filly & Mare Sprint (G1). That speed is likely transmitted courtesy of Dialed In’s dam, Miss Doolittle, a daughter of Storm Cat and 1992 champion two-year-old filly Eliza. Miss Doolittle was a precocious juvenile herself, placing third in the 2000 Schuylerville (G2) at Saratoga.
Both of Dialed In’s grandsires – A.P. Indy and Storm Cat – are out of outstanding mares by Secretariat. Thus Dialed In carries a duplication of the all-time great Triple Crown conqueror from 1973.

Super Stock’s maternal half has more of a blue-collar aspect. He is out of Super Girlie, who spent much of her 39-race career in claiming races. But Super Girlie is producing better-caliber offspring, with her daughter Boujie Girl placing in the 2018 Sorrento (G2) and Del Mar Debutante (G1).

Super Girlie is by Closing Argument, the close second in the 2005 Kentucky Derby. A half-length away from springing a 71-1 shocker, he was just denied by the 50-1 Giacomo. Closing Argument’s signature win came earlier that year in the Holy Bull, and he was third in the Blue Grass (G1) in his only ensuing Derby prep.
Closing Argument is a representative of the Man o’ War sire line, which continues to hang on into the 21st century. Although Man o’ War remains a key building block in the heart of pedigrees, his position as a tail-male influence relies upon his descendant In Reality. Hero of the 1967 Florida Derby and 1968 Metropolitan Mile, among other major stakes, In Reality gave a vital boost to the male line by siring several sons capable of extending it.
One of those In Reality stallions, Valid Appeal, is a full brother to Hall of Famer Desert Vixen. Not as accomplished as his sister on the racetrack, Valid Appeal nevertheless won the 1975 Dwyer H. (G2) and became a successful sire. Among his best sons is sprinter-miler Successful Appeal, winner of the 1999 Withers (G2) and 2000 A.G. Vanderbilt H. (G2) and sire of Closing Argument.
In keeping with that speedier profile, Closing Argument’s top performers include Grade 2-winning sprinters Capital Account and Little Gerda (in Japan). He also factors as the broodmare sire of last fall’s Thoroughbred Club of America (G2) heroine Inthemidstofbiz. But Closing Argument’s near-millionaire son, Smack Smack, stayed 1 1/8 miles well when taking several stakes, most notably the 2016 Prairie Meadows Cornhusker H. (G3). 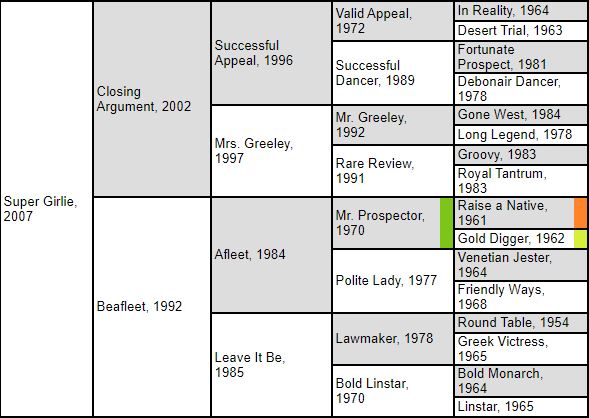 Super Girlie is a half-sister to Puerto Rican champion Gabbywitha G. Another half-sister is the stakes-placed Be Silver, who is herself the dam of 2013 La Brea (G1) scorer Heir Kitty.
Super Girlie’s dam, Beafleet, is by Canadian Hall of Famer Afleet. A son of Mr. Prospector, Afleet furnishes Super Stock with a duplication of “Mr. P” who also appears in Dialed In.
Afleet earned his marquee wins in the 1987 Jerome H. (G1) and Pennsylvania Derby (G2). Afleet’s paternal grandson Afleet Alex will go down in history for his sensational recovery from near-disaster in the 2005 Preakness, and he also romped in the Belmont en route to championship honors. Afleet’s daughters have produced champion Fleet Indian, the aforementioned Nehro, and turf sprint siblings California Flag and Cambiocorsa (herself a noted broodmare).
Beafleet is out of the prolific campaigner Leave It Be, who won or placed in 30 stakes over the course of a 66-race career. Bankrolling $788,630 between 1987-91, Leave It Be is by far the best runner by Lawmaker, a lesser son of Hall of Famer Round Table.
Leave It Be’s dam, Bold Linstar, is by Bold Monarch who faded into obscurity after not living up to his bloodlines. A well-bred son of the great patriarch Bold Ruler (sire of Secretariat and male-line ancestor of Seattle Slew), Bold Monarch is closely related to champion Bold Bidder (sire of Spectacular Bid). That’s an intriguing factoid since Bold Bidder turns up in Dialed In’s pedigree too, as the broodmare sire of Eliza.
The next dam in the sequence, Linstar, is by Dark Star, the 1953 Kentucky Derby upsetter who marred the otherwise flawless record of Hall of Famer Native Dancer. Linstar’s daughter Maybellene won a division of the Test (G2) in 1974, giving the family a high-profile trophy among its generally less fashionable black-type.
Going much further back, this is the 23-a family responsible for 1932 Kentucky Derby and Preakness victor Burgoo King. 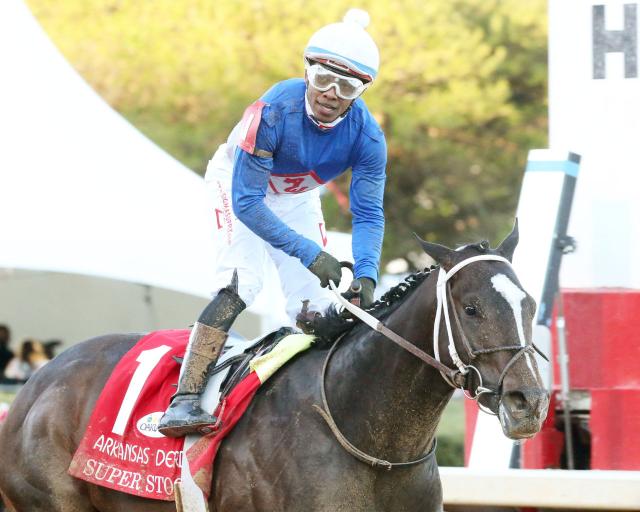