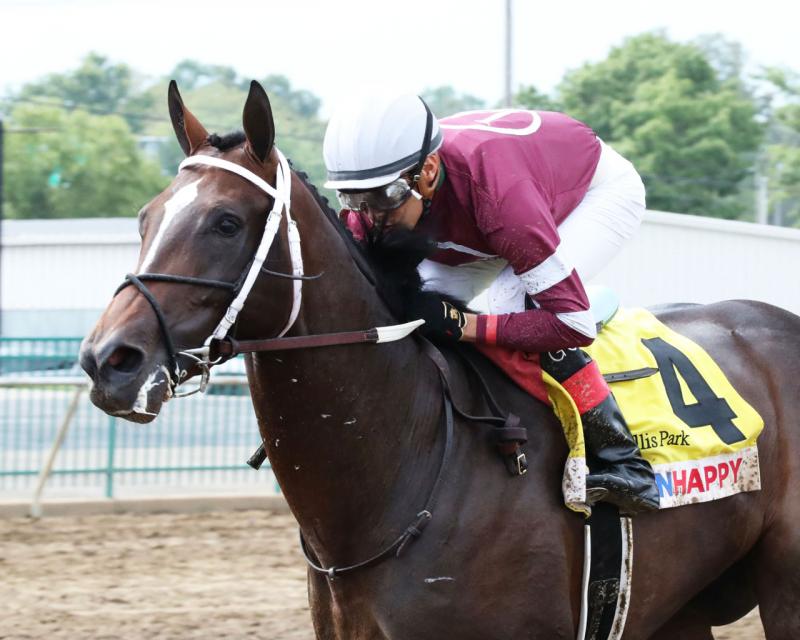 Midnight Bourbon’s sire, Hall of Famer Tiznow, has helped carry the torch for Man o’ War. Over the past century, his male line has been in danger of becoming more of a flicker than a flame at times, but it has persevered.
While Man o’ War’s greatest son, War Admiral, left his legacy as a broodmare sire, another son, War Relic, stepped up to carry on the sire line. From him descends the key player in its survival, In Reality. Hero of the 1967 Florida Derby and 1968 Metropolitan Mile during his prolific time on the track, In Reality sired successful sons to propagate the line both here and abroad.
Tiznow traces to In Reality’s son Relaunch – ironically, not by way of any of Relaunch’s top performers like Skywalker, Waquoit, or Honour and Glory. Tiznow is by Relaunch’s lightly raced son Cee’s Tizzy, who did not win a stakes in his brief career but did place third to Home at Last and Unbridled in the 1990 Super Derby (G1).
Cee’s Tizzy proved to have a more enduring impact as a stallion. Tiznow is of course the best of his offspring, as the Horse of the Year in 2000 and still the only two-time Breeders’ Cup Classic (G1) winner.
Although the Kentucky Derby has remained elusive so far, Tiznow has sired several notable hopefuls, including Colonel John (2008), Gemologist (2012), and Irap (2017). And he has had classic success through his son Da’ Tara, who famously upset the 2008 Belmont (G1), as Triple Crown-seeking Big Brown was eased. Tiznow factored as the broodmare sire of last year’s Derby favorite and runner-up, Tiz the Law, and he likewise appeared on the dam’s side of 2020 Japanese Triple Crown champion Contrail.
Midnight Bourbon is out of an A.P. Indy-line mare, a cross that has worked with Tiznow before. Among Tiznow’s major winners produced by daughters of A.P. Indy are millionaire Morning Line and 2014 Brooklyn Invitational (G2) Norumbega.
Such a pattern duplicates the influence of 1977 Triple Crown legend Seattle Slew. The sire of Hall of Famer A.P. Indy, “Slew” appears in the pedigree of Tiznow’s dam, Cee’s Song. She is by the Seattle Slew stallion Seattle Song, a high-class campaigner on the European turf who scored his signature win in the 1984 Washington D.C. International (G1). 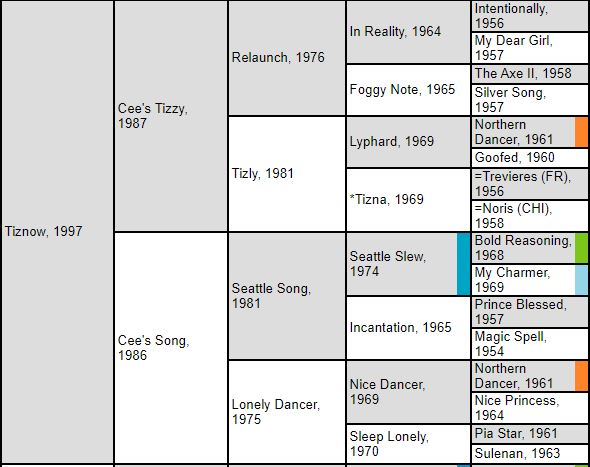 Midnight Bourbon’s dam is by A.P. Indy’s son Malibu Moon, another example of a limited racing career being no obstacle to becoming a successful sire. Malibu Moon won second time out as a juvenile and never raced again, but passed on his superior bloodlines at stud.

Sire of 2013 Kentucky Derby star Orb, Malibu Moon is also making a mark as a broodmare sire. His daughters have produced the likes of champion Stellar Wind, Bellafina, and recent Santa Ynez (G2) vixen Kalypso.
Midnight Bourbon’s dam, Catch the Moon, is single-handedly responsible for four graded winners. Even more remarkable, she has only four registered foals of racing age, so she’s batting a thousand as a producer.
Her first foal, Cocked and Loaded, won the 2015 Iroquois (G3) and Tremont. He was by Tiznow’s son Colonel John, and thus a three-quarter brother to Midnight Bourbon, who himself ran in last fall’s Iroquois but settled for second.
Her next foal, Girvin (by Tale of Ekati), took both the Louisiana Derby (G2) and Risen Star (G2). Midnight Bourbon, who recently wired the Lecomte (G3) at Fair Grounds, hopes to emulate his half-brother’s success on the New Orleans path to the Derby. Although Girvin was unplaced in the 2017 Kentucky Derby, he went on to land the Haskell Invitational (G1).
Catch the Moon’s third surviving foal, Pirate’s Punch, took longer to earn black-type, but progressed from thirds in the 2019 Super Derby (G3) and 2020 Mineshaft (G3) to cross the wire first in a pair of graded events at Monmouth last summer. Demoted to second for interference in the Philip H. Iselin (G3), Pirate’s Punch made no mistake in the Salvator Mile (G3). 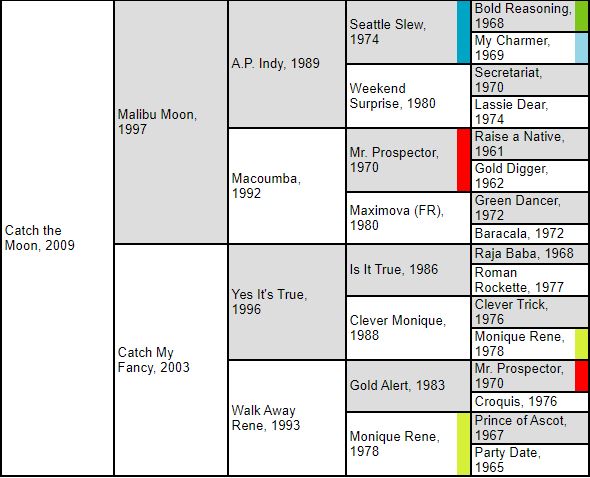 I’d like to think that Midnight Bourbon and Girvin inherited their taste for Fair Grounds from their fourth dam in the female line, Louisiana star Monique Rene. A 29-time winner from 45 career starts, she won 15 stakes and placed in six others, including a second in the 1983 Pippin at Oaklawn Park in a rare foray outside her home state. Monique Rene ranked as the all-time richest Louisiana-bred upon her retirement in 1984, with a bankroll of $456,250.

Despite her rather obscure parentage, Monique Rene became a noted broodmare. In addition to producing Grade 3 winner Prince of the Mt., she remains influential through her daughters. Her descendants include Canadian champion Kiss a Native; Grade 1-winning miler Silver Max, best known for his turf prowess; and brilliant sprinters like Yes It’s True and Shancelot.
Midnight Bourbon’s pedigree includes close inbreeding to Monique Rene. His second dam, Catch My Fancy, is by Yes It’s True and out of Monique Rene’s daughter Walk Away Rene.
Perhaps Monique Rene was tapping into genetic resources buried further within her ancestry. She herself carried a duplication to Stephanie. Best known as the granddam of Count Fleet, the 1943 Triple Crown champion, Stephanie appears through two other grandsons in Monique Rene’s pedigree – Count Speed (Count Fleet’s full brother) and Bolero.
Monique Rene hails from a family once cultivated by Rex Ellsworth, owner/breeder of the all-time great Kentucky Derby hero Swaps (1955). While Swaps came from an entirely different female line, Ellsworth bred Monique Rene’s third dam, Dancing Date, along the same cross of *Khaled over a *Beau Pere mare. Dancing Date was closely related to another Ellsworth celebrity, Terrang, winner of the 1956 Santa Anita Derby.
Looking much deeper in the tail-female line, Monique Rene descends from the American Family No. 1 (A1), the source of six Kentucky Derby winners. Gato Del Sol (1982) is the only one in the last century, for five came in the early years. Riley (1890) and Azra (1892) were followed by the more memorable trio of Hall of Famers Ben Brush (1896), Regret (1915), and Exterminator (1918). All trace to the mid-19th century matron Margaret Wood, a gift to Kentucky’s great statesman Henry Clay. 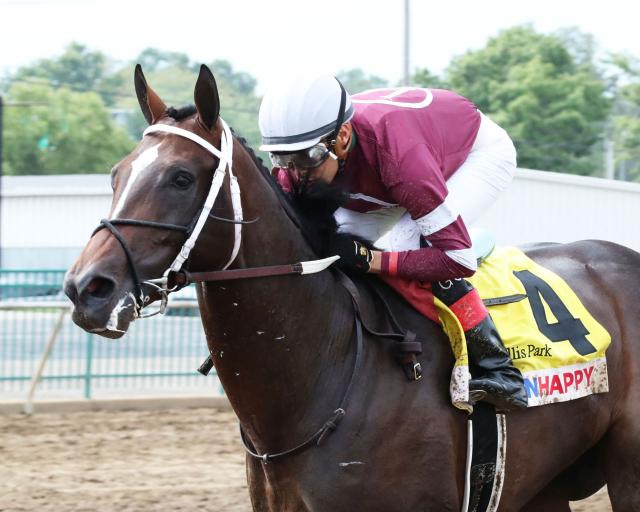