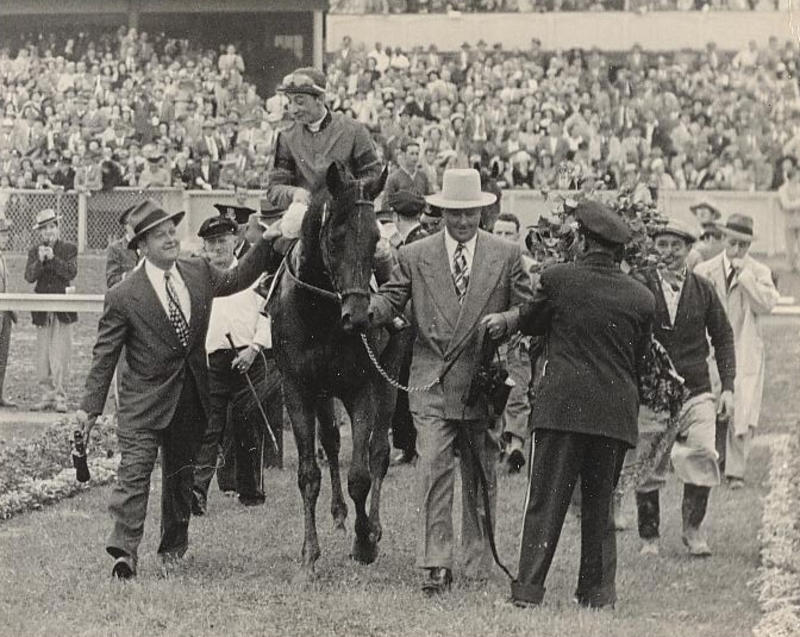 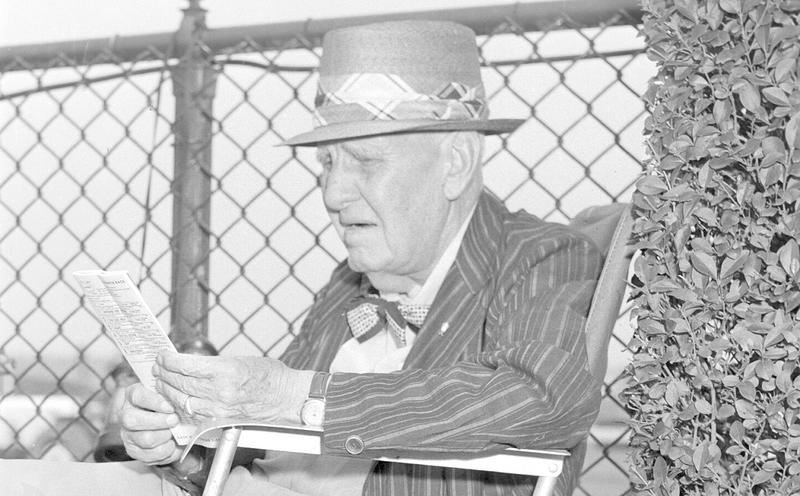 Training racehorses is a craft that goes beyond merely physical fitness. The all-time great conditioners have additional skills that bring out the best in even difficult pupils. Thus any trainer who can prepare a 3-year-old to pass the test of the Triple Crown is by definition a master.

Among that elite group, however, certain horsemen stand out for their achievements in the Kentucky Derby, Preakness, and Belmont over the years. Ranking is no easy task, but this is my attempt to order the Triple Crown-winning trainers.

1. Ben and Jimmy Jones. The father and son are distinguishable in the official record, but as a practical matter, the Hall of Famers belong together as a formidable team during Calumet Farm’s heyday. Indeed, Jimmy was responsible for 1948 Triple Crown winner Citation, who technically switched to father Ben for the Derby. The elder Jones had to be an incredible psychologist to figure out the mad Whirlaway and turn him into the 1941 Triple Crown winner and all-around gladiator.

Ben came close to having another Triple Crown hero, with Pensive losing the 1944 Belmont by a half-length, and ultimately set the Derby record of six wins. Jimmy, officially the winner of two Derbys and four Preaknesses, was unlucky when his sensational Tim Tam broke down in the 1958 Belmont, or else he too was on his way to Triple Crown glory.

2. “Sunny Jim” Fitzsimmons. Training the father-and-son Triple Crown stars Gallant Fox (1930) and Omaha (1935) would have been enough for a Hall of Fame plaque, but “Mr. Fitz” continued to develop greats through the 1950s.

His six Belmont winners include Hall of Famers who might have swept the Triple Crown in different circumstances – Johnstown, likely foiled by a muddy track in the 1939 Preakness, and Nashua, denied by Swaps in the 1955 Kentucky Derby. In addition to those four Woodward homebreds, Fitzsimmons trained the Wheatley Stable’s homebred Bold Ruler to a 1957 Preakness victory and Horse of the Year honors in arguably the greatest 3-year-old crop in U.S. history.

3. Bob Baffert. One shy of Ben Jones’ record with five Derby wins, and tied for the all-time Preakness record with seven trophies, Baffert kept coming agonizingly close to the crown. Silver Charm (1997) and Real Quiet (1998) were mugged late in the Belmont, while War Emblem (2002) flubbed the Belmont start. That disappointment came on the heels of Point Given’s settling for the “two-thirds club” in 2001, failing in the Derby but crushing the next two jewels.

After coming up short so often, it meant all the more when American Pharoah (2015) ended the 37-year Triple Crown drought. Nor was it an easy job. Baffert had to bring the Zayat Stables champion back to peak form following an injury that had ruled him out of the Breeders’ Cup Juvenile (G1). The Hall of Famer again displayed his horsemanship with unbeaten Justify (2018), who not only broke the “Apollo curse” as an unraced 2-year-old going on to win the Derby, but also became the first of that profile to sweep the Triple Crown.

4. Max Hirsch. Another Hall of Famer with multiple classic winners, Hirsch might have been unlucky not to have a father-and-son Triple Crown duo himself. Bold Venture turned the 1936 Derby/Preakness double, but sustained a career-ending injury prior to the Belmont. His son Assault, fortunate to survive skewering his hoof with a surveyor’s stake as a weanling, had a malformed foot for the rest of his life. But Hirsch helped his fellow Texas-bred overcome and achieve the Triple Crown in 1946. Assault was also successful as an older horse, and under Hirsch’s care, he even emerged from a futile stint at stud to win the 1949 Brooklyn Handicap.

Hirsch trained an ensuing son of Bold Venture to win two of the three jewels – 1950 Derby and Belmont hero Middleground – while champion High Gun gave Hirsch his fourth Belmont victory in 1954. Although often remembered for his lengthy career with King Ranch, Hirsch initially developed Grey Lag and also trained fellow 1920s superstar Sarazen. He passed on his legacy to his son Buddy, himself a Hall of Famer, and daughter Mary, a pioneering woman in the training ranks.

5. Lucien Laurin. The French Canadian was on his way to retirement with no pretensions to the Hall of Fame, until a serendipitous link was forged with Penny Chenery’s Meadow Stable. Prior to his Meadow connection, Laurin had just one classic win, sending out Amberoid as a spoiler in the 1966 Belmont. But he’d go on to win five of six classics in a two-year span, thanks to Riva Ridge and Secretariat.

Although Riva Ridge captured the 1972 Derby and Belmont, his 2-year-old stablemate Secretariat was the brightest star of the season and accordingly Horse of the Year. Aside from the normal expectations for the 1973 Derby trail, Laurin had the added pressure of training a colt just syndicated for a then-record $6.08 million as a stallion prospect. He finely tuned the “tremendous machine” to record-setting triumphs in a Triple Crown for the ages. In later years, Chenery said that Laurin’s rigorous training regimen got the most out of Secretariat, more than any other trainer would have. For that, he’s a dual Hall of Famer, enshrined in both Saratoga Springs and Canada.

6. Laz Barrera. The Cuban émigré will forever be identified with 1978 Triple Crown legend Affirmed, whom he trained to be a champion at two, three, and four. To keep a horse performing at that exalted level, for such a duration of time, is in itself testimony to Barrera’s horsemanship. Not to be overlooked, however, is the Hall of Famer’s remarkable training feat with Bold Forbes. After beginning his career in Puerto Rico, the speedster was nurtured into winning the 1976 Derby and Belmont by Barrera. Hall of Fame jockey Angel Cordero was adamant that Barrera was the one who got the natural sprinter to last the 1 1/2-mile trip.

7. Billy Turner. Synonymous with Seattle Slew, Turner was an intuitive horseman who was instrumental in the campaign of the first undefeated Triple Crown winner. “Slew’s” blistering speed in the 1977 Derby and Preakness had to be harnessed, and his spirited nature becalmed, if he were to complete the sweep in the Belmont. The combination of long, slow gallops, and a very belated appearance in the paddock to keep the lid on, worked like a charm. Had Turner gotten his way, and given Slew a holiday after his Belmont heroics, the great colt would never have run in the Swaps (G1), or suffered the first (and worst) loss of his life.

8. H.G. Bedwell – Hall of Famer was the nation’s leading trainer by wins seven times, six years in a row (1912-17), but now exists in racing’s collective memory alongside inaugural 1919 Triple Crown winner Sir Barton. Bedwell deserves credit for managing Sir Barton’s chronically bad feet, and worse temper. Indeed, with a lesser horseman, it’s questionable whether Sir Barton would have achieved as much as he did. Bedwell had the ability to get him ready for the Derby off an eight-month layoff, and first try beyond a sprint. While he was just a maiden, and Hall of Famer Billy Kelly was then the stable star, Sir Barton was coming along well enough for Bedwell to pitch him into the entries, and the rest is history.

9. George Conway. The longtime foreman for Man o’ War’s trainer, Louis Feustel, Conway later took over the top trainer’s role for Sam Riddle, and fittingly enjoyed his greatest results with the offspring of “Big Red.” Conway was enamored of his first Belmont hero, Crusader, the 1926 Horse of the Year who was redolent of his grand chestnut sire. It’s an irony of history that Conway’s more enduring claim to fame is with a Man o’ War son who looked nothing like the tribe – the small, dark bay War Admiral. The ultra-gritty colt used his speed and heart to capture the 1937 Triple Crown. War Admiral’s well-publicized aversion to the starting gate was a less endearing habit that Conway had to navigate.

10. Don Cameron. 1943 Triple Crown legend Count Fleet has carried his trainer along with him in history, rightly so since Cameron had to deal with his problems in more ways than one. First he had to control the nearly uncontrollable colt, and succeeded as Count Fleet became a champion 2-year-old. Then the heavy Derby favorite sustained an injury in his Wood Memorial victory. It was a race against time to make sure that infection was averted, and that he was healed by Derby time. Cameron’s ministrations got him through. Count Fleet missed a workout, but made it to the Derby and steamed through the three jewels as by far the best. 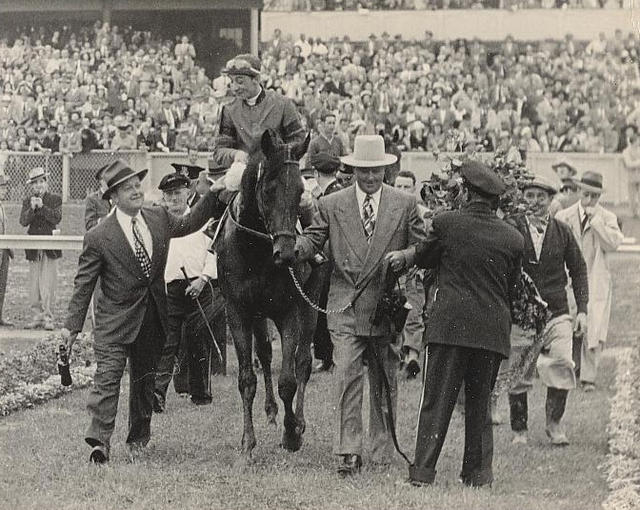