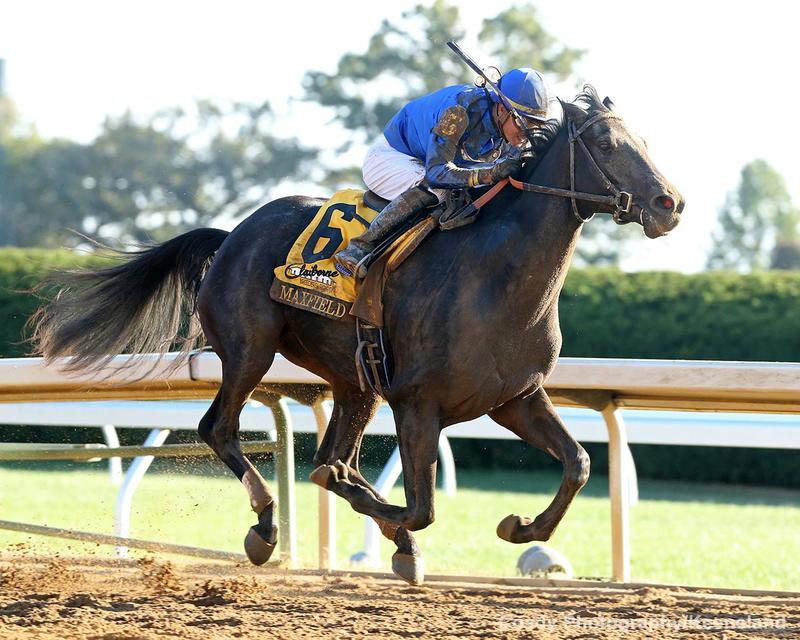 Godolphin's homebred Maxfield earned 10 points on the 2020 Road to the Kentucky Derby as well as an automatic berth into the Breeders' Cup Juvenile (G1) at Santa Anita on November 1, following his impressive 5 1/2-length victory in the $500,000 Breeders' Futurity (G1) at Keeneland on Saturday. The two-year-old remained unbeaten in stopping the tele-timer in 1:44.21 for 1 1/16 miles in his stakes debut.

Maxfield was bred in the Bluegrass State and made his debut beneath the Twin Spires on September 14 in a salty 11-horse maiden special weight event on the main surface. The son of Street Sense was away slowly on debut in the one mile test when going postward at odds of 10-1.

The Brendan Walsh trainee picked up momentum late at first asking, however, and graduated with a fine stretch run under pilot Jose Ortiz. He earned an 85 BRIS Speed number for that tally with an accompanying 102 BRIS Late Pace figure.

At Keeneland, Maxfield was once again tardy at the start but made up for it late. The juvenile colt swept to the front in early stretch beneath Ortiz and poured it on through the stretch, leaving little doubt as to who was best on the day. He earned a hefty 99 Speed number in the Futurity and also registered a robust Late Pace figure of 103.

Maxfield was produced from the winning Bernardini mare Velvety who is a half-sister to a pair of graded stakes winners including Sky Mesa, who bagged the 2002 Hopeful (G1) and Breeders' Futurity (G2). This is the same female line as Breeders' Cup Mile (G1) hopeful Lucullan.

The visually impressive two-year-old colt has displayed a potent turn of foot to this stage of his development. He is by a Kentucky Derby-winning sire, and his broodmare sire was a Preakness (G1) hero, so going 1 1/4 miles in May at Churchill Downs should be right in his wheelhouse.

Godolphin has conquered nearly every major race across the globe, with a glaring exception being the Run for the Roses. Could 2020 finally be the year where the Kentucky Derby winner will pose for photos in the famous Royal Blue silks?