Life Is Good confirmed himself as a leading Kentucky Derby contender by throttling the competition in Saturday’s $300,000 San Felipe S. (G2) at Santa Anita, drawing off to an eight-length decision. The Into Mischief colt is now 3-for-3 for six-time Kentucky Derby winner Bob Baffert.

Breaking from the innermost post, Life Is Good sprinted clear from the starting gate and dictated terms on a clear lead before drawing off spectacularly. He lost focus while comfortably cruising through the stretch, drifting out toward the middle of the track, but the bay three-year-old was impressive nonetheless.

“He’s learning to settle,” jockey Mike Smith said. “He’s maturing and getting smarter. Early on, he was so used to exploding from the pole or the gate. He’s learning how to run now which is the big key, and he’s learning how to get into a rhythm. The rhythm is going to be a bit fast because he is that good and he has an extremely high cruising speed.

“We are going to have to work on some little quirks. He starts looking at things because he is out there by himself, but I can’t take so much of a hold of him to give him company either, so it’s a catch-22…He’s just so talented. I had a strong hold on him down to the wire, just holding onto him making sure that he stayed straight.”

“Down the backside that’s where this horse can get a little tough and I was hoping we’d get a little 47 and change (for the opening half-mile),” said Baffert, who stretched his record with a seventh San Felipe victory. “But Mike he just sat on him, he was doing it so easily, I saw 46 and four I said, ‘well, I think I could live with that. I always thought he could be a super horse, we’ll find out today,’ but at the quarter pole I could tell he was just still cruising, just doing it easy. I just feel fortunate that I have this horse in my barn.”

The San Felipe awarded points on a 50-20-10-5 scale as a Road to the Kentucky Derby series qualifier, and Life Is Good had already picked up 10 points for winning the Jan. 2 Sham S. (G3) at Santa Anita. He opened his racing career with a 9 1/2-length romp over maiden special weight foes at Del Mar in late November.

Medina Spirit, stablemate of Life Is Good and winner of the Jan. 30 Robert B. Lewis S. (G3) over the track, easily outfinished Dream Shake for second as the 3-1 second choice in the wagering. Roman Centurian was several more lengths back in fourth.

The Great One, None Above the Law, and Governor’s Party rounded out the order of finish.

Bred in Kentucky by Gary and Mary West, Life Is Good was purchased for $525,000 as a yearling at the 2019 Keeneland September sale.

Life Is Good will likely make his final Kentucky Derby prep in the $750,000 Santa Anita Derby (G1) on April 3. 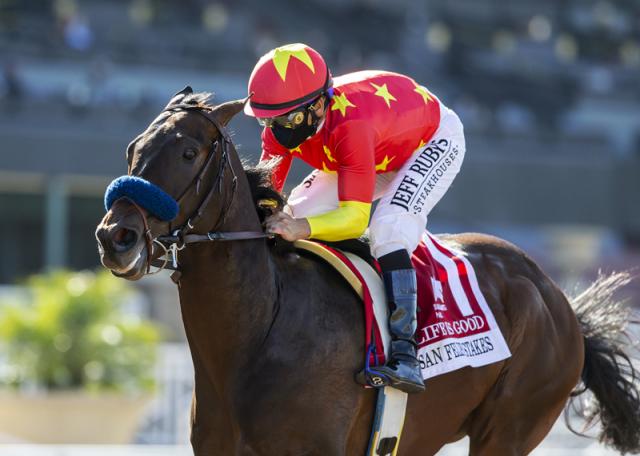