Oct 25, 2019 John Mucciolo/TwinSpires.com
Tweet
What horses are running in the Street Sense Stakes?

The 2018 Street Sense Stakes winner Improbable would eventually advance into a Kentucky Derby start following his win at Churchill Downs; thus this renewal could have implications for the 2020 Kentucky Derby. A cast of 11 juveniles will vie in Sunday’s $120,000 Street Sense Stakes at Churchill Downs. The one-mile test attracted some very interesting prospects in a well-matched field that looks to be an outstanding betting race.

Here is the Street Sense cast:

This chestnut showed nice progression when breaking his maiden in fine style over a big field at Keeneland last time out. The Bill Mott pupil is well drawn on the rail for his stakes debut, and the son of City Zip shows two excellent morning drills in advance of this assignment, as well. Corey Lanerie picks up the mount.

Mark Casse trainee was a fine maiden winner at The Spa in his dirt debut two back, but he retreated quickly in the Breeders’ Futurity (G1) at Keeneland most recently. The April foal was rank on that day and is expected to make a big leap forward in his second run with stakes foes. The Live Oak homebred could be of great value beneath Tyler Gaffalione.

Bay son of Tiznow was a sharp debut winner at Ellis Park followed by a fine allowance second when just missing at Keeneland in preparation of this outing. The Casse trainee has good early presence, and his pedigree suggests that he will thrive going a route of ground. Miguel Mena will be in the controls aboard the win contender.

Kentucky-bred colt graduated at Churchill Downs when coming from well off the pace at first asking, and the bay used that same running style to make it two-for-two when toppling a solid allowance cast at Keeneland. The $70,000 two-year-old purchase makes his route and stakes debut on Saturday for Stan Hough as one of the main players in the field. This late runner will be guided home by regular pilot Julien Leparoux.

Wildcard in the cast won with ease on the all-weather at Arlington Park on debut and will stretch out while moving to the dirt for the initial time today. This Mr. Speaker colt was full of run in the lane in a sprint offering to suggest that he will be comfortable running one mile beneath the Twin Spires. The dark bay overcame the rail post at first calling and shows three solid morning drills since. Sophie Doyle will be in the stirrups.

Steve Asmussen trainee earned a robust 95 BRIS Speed number in his maiden-breaking score at Keeneland most recently, which was also his first run on the dirt. This gray son of Declaration of War brought a final bid of $190,000 as a juvenile in training and he is bred to run long being out of a Tapit mare. The speedy colt will be dangerous with even slight improvement in his Churchill Downs bow.

Kenny McPeek pupil won his first two races prior to making a mild late bid when fifth in the grassy Bourbon Stakes (G3) at Keeneland in advance of today. This son of Summer Front will give the main surface a try today for the first time, and he could be live following a bullet five-eighths drill on Keeneland’s dirt surface. The talented Kentucky-bred will have Brian Hernandez, Jr. up.

Speedy son of American Pharoah has been involved to the top of the lane in a pair of Grade 1 races in succession before tiring late, and he should appreciate the class relief in the Street Sense. Colt from the barn of legendary conditioner D. Wayne Lukas has used Churchill Downs as his home base this campaign and comes in with a nice half-mile breeze as the potential early leader in the field. He will be dangerous if left alone early under Luis Saez.

Tapiture colt will remove blinkers, stretch out to a route, and also moves from the turf to the main oval in this assignment. The capable colt has obvious ability, but he faces a tall task going long from this post against these prospects. He would need a lifetime best beneath Gab Saez.

Third timer showed excellent improvement second time out with a sharp maiden win on the dirt at Laurel Park. This Kentucky-bred son of Blame showed his forward move with blinkers added in his victory, though he will need another leap forward to overcome this field from a wide draw while making his stakes debut. Sheldon Russell comes along for the voyage.

Chestnut son of young sire Carpe Diem rolls in off of a pair of sprint wins at Indiana Grand in succession. The May foal was saddled with the widest post in the cast, and he will have to make a big move in the right direction to factor on this occasion while making his route and stakes debut. James Graham will be in the silks atop the Tom Amoss pupil. 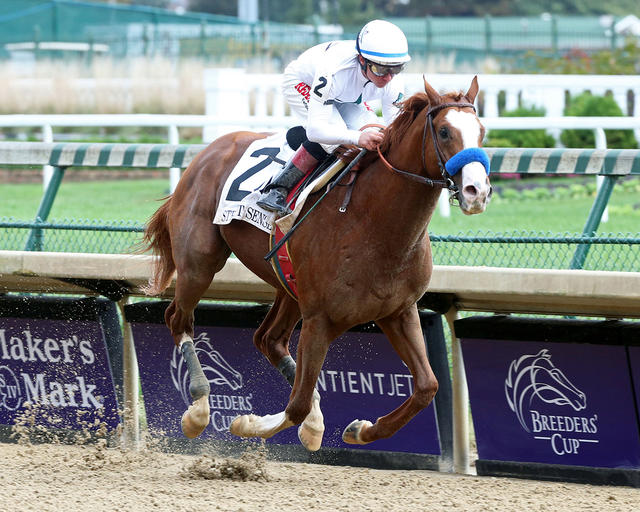