The first of three Road to the Kentucky Derby series qualifiers at Fair Grounds in 2023, Saturday’s Lecomte (G3) awarded points on a 20-8-6-4-2 scale to the top five finishers. Instant Coffee rallied to win going away by a 2 1/2-length margin, moving to second on the Kentucky Derby leaderboard with 32 total points.

Freshened two months following a 1 1/4-length win in the Kentucky Jockey Club (G2) in late November, Instant Coffee progressed nicely in the Lecomte, displaying professionalism after a pair of uneven stakes performances as a juvenile. The late runner confirmed himself as one of the top Kentucky Derby contenders in a deep Brad Cox stable.

The dark bay was far from a finished product in his career debut at Saratoga last summer, failing to maintain a straight course in the stretch, but Instant Coffee delivered a glimpse of his potential, rallying from far back to prevail. However, he wasn’t prepared for the break and lacked focus recording a closing fourth in his stakes debut, the Breeders’ Futurity (G1).

His win in the Kentucky Jockey Club wasn’t pretty, traveling way wide on both turns, and he came under an early ride from Luis Saez while trailing behind a ridiculously slow pace (six furlongs in 1:15.02). The long-striding colt eventually got it into gear, grinding his way to the front, but questions remained about Instant Coffee’s effectiveness moving forward.

As the Lecomte revealed, Instant Coffee has advanced as a three-year-old. It was the performance connections hoped for, and the convincing triumph may wind up being a springboard to bigger goals.

Instant Coffee entered his three-year-old season with upside, but his Brisnet Speed ratings needed to improve to be considered a legitimate Kentucky Derby (G1) contender. His 84 figure from the Kentucky Jockey Club won’t get it done this year.

The son of top freshman sire Bolt d’Oro alleviated concerns in the Lecomte, earning a career-best 96 rating. And his numbers are eligible to keep rising.

Two Phil’s offered a good run to reach the lead in upper stretch. And while he could not withstand the charge of Instant Coffee, he kept trying all the way to the wire, winding up more than five lengths clear of Confidence Game in third.

The runner-up distinguished himself among Lecomte also-rans. And that’s not been bad company in recent years. Epicenter, runner-up in last year’s Kentucky Derby and Preakness (G1), finished second in the 2022 Lecomte, and Kentucky Derby winner Mandaloun was third in the 2021 edition.

Unraced nearly three months, Two Phil’s was making his first appearance since easily winning the Street Sense (G3) over a sloppy track at Churchill Downs in late October. The chestnut son of Hard Spun looked promising at sprint distances when capturing the six-furlong Shakopee Juvenile S. at Canterbury Park by nearly 10 lengths last summer, but Two Phil’s has shown his versatility by performing well in a two-turn stakes for trainer Larry Rivelli.

Instant Coffee and Two Phil’s may have more to offer in upcoming starts. 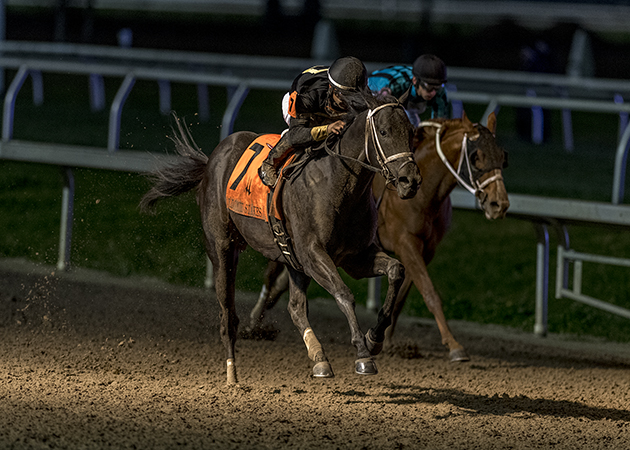