Tales from the Crib: Classic Causeway

Mar 11, 2022 Kellie Reilly/Brisnet.com
Tweet
Classic Causeway was always going to be a sentimental rooting interest in the Kentucky Derby (G1), as one of only three registered foals bequeathed by the “Iron Horse” Giant’s Causeway in his final crop. But the blaze-faced chestnut has the added appeal of a “Cinderella story,” after a road paved with the dashed hopes of Kentucky West Racing’s Patrick O’Keefe.
A homebred for Kentucky West Racing and Clarke M. Cooper, Classic Causeway is a grandson of the first mare O’Keefe acquired when he ventured into Thoroughbred breeding. The Idaho real estate developer, who established Bear Lake West Golf and Country Club, had a ranch in nearby St. Charles that could serve as a fine location for raising horses.
That initial idea suggested by a friend, Wayne Call, launched the enterprise. At the time, O’Keefe could hardly have forecast an experience that he now describes as “hell on wheels” until Classic Causeway came along.
As recounted by Ray Paulick in the Paulick Report, O’Keefe spotted a mare in the Daily Racing Form – Rita Rucker – and purchased her privately for only $7,500.
As her bargain price indicates, Rita Rucker was not fashionably bred, or a high-profile winner. Yet the Arkansas-bred by Dmitri (an obscure son of Danzig) was a tough, blue-collar type who earned her $249,767 bankroll the hard way, through 72 career starts. Rita Rucker won 21 times, from sprints to routes, on dirt and turf. Although she didn’t win stakes worth enough for “black-type” designation, she did capture four minor events at Mountaineer in 1998 – the Decoration Day H., Hancock County H., Ohio Valley H., and Golden Sylvia H. – before ending her career in the claiming ranks.

O’Keefe bred Rita Rucker to 1995 Kentucky Derby hero Thunder Gulch, who also garnered the Belmont S. (G1) and Travers (G1) during his championship campaign. The product of their union, Private World, showed something of her sire’s talent and her dam’s determination, but her career was limited to just six starts. She won her first three as a juvenile, including the 2005 Anoakia S. and Moccasin S.

Rita Rucker’s other offspring had more hard-luck stories than success. Bred to Thunder Gulch’s Hall of Fame son Point Given – the 2001 Preakness (G1), Belmont, and Travers star – she produced Point Encounter, whose sharp debut victory at Santa Anita suggested he could be special. Unfortunately, that ended up being his one and only racetrack appearance, due to injury. Point Encounter’s younger brother, Point Defiance, sparked early hopes, but never made it to the races.

Meanwhile, Private World was also living the broodmare life without much fanfare from her first six foals, three of whom managed to win. At the age of 13, Private World visited Giant’s Causeway. Their daughter, named Rockie Causeway, was bred in partnership with Cooper, who now came on board with O’Keefe.

Rockie Causeway was knocking on the door in ultra-competitive maidens on the Southern California turf in 2020, and she broke through at Santa Anita on Feb. 19, 2021. Again, though, the promise of better things to come was put on hold after she was badly hampered in an allowance. Rockie Causeway is embarking on the comeback trail, having just returned to the worktab at Santa Anita on Mar. 4. While she’s been away, her younger brother has made the family famous on the Derby trail. 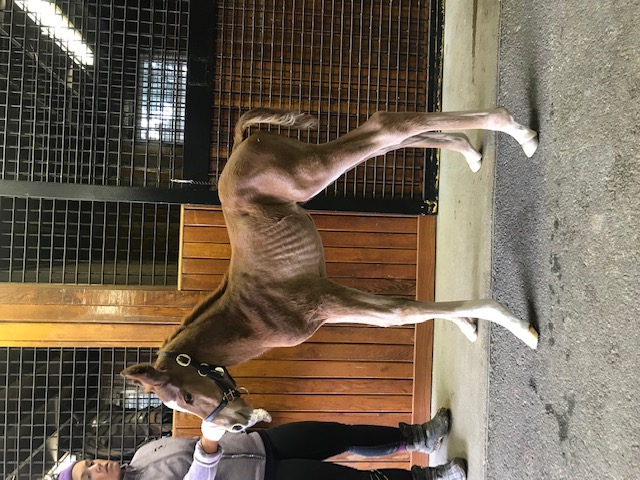 Classic Causeway was born and raised at his sire’s longtime home, Ashford Stud. The North American arm of Coolmore’s global empire, Ashford was also the home of his late broodmare sire, Thunder Gulch. The farm mourned the passing of Thunder Gulch in March 2018, just about a month before the loss of Giant’s Causeway. It is a twist of fate that Classic Causeway, combining the blood of both, first came into being during that sad spring.

“He was always a very good-looking colt with size and plenty of strength and quality. He was a very straightforward baby and was always correct and athletic.”
The colt was “all the more special,” given the Giant’s Causeway factor, but he was memorable in his own right as well.
“He also stood out because he was tough,” Mansergh-Wallace noted. “After weaning and during his early yearling year, he would frequently try and take off on his handlers. He wasn’t bad or mean by any means, but he was a very high-energy colt.”
When trainer Brian Lynch went to check out the yearling, he welcomed the opportunity to add him to his future roster – after he learned the basics at Margaux Farm.
“I remember showing him to Brian Lynch one day during the summer,” Mansergh-Wallace added, “and he loved him from the moment he saw him. He was sent to Margaux at the end of September and they did a lovely job with him.”
Margaux’s Dermot Littlefield had charge of his early education.

Classic Causeway graduated to Lynch’s barn at Churchill Downs, where he clocked his first official work, a three-furlong breeze in :37.40, on June 18, 2021. Promoted to the trainer’s string at Saratoga, he made a dazzling Spa debut on the Jockey Club Gold Cup (G1) undercard. Classic Causeway was ignored at 13.60-1 in the seven-furlong maiden, but rolled on the front end to a 6 1/2-length victory.

Favored next time in the Breeders’ Futurity (G1) at Keeneland, Classic Causeway tried to go wire-to-wire again. Post 13, however, forced him to expend more energy than helpful, especially in his first try at two turns and at a higher level. Classic Causeway tired to third behind Rattle N Roll, a solid effort in the circumstances. Then he drew the rail in the Kentucky Jockey Club (G2), switched to stalking the pace, and finished a better second to Smile Happy.

Classic Causeway took a substantial step forward in his sophomore bow, withstanding pace pressure to draw off in style in the Sam F. Davis (G3) at Tampa Bay Downs. Now he’ll be the favorite once more in Saturday’s Tampa Bay Derby (G2). Among his rivals is another Giant’s Causeway bequest, Giant Game. What are the odds that two of his last three sons would end up confronting each other on the Road to the Kentucky Derby?

If Classic Causeway can wear the roses on the first Saturday in May, his name would prove prophetic. The late, great “Iron Horse” would receive a poignant tribute by coming up with a first U.S. classic winner, on a resume laden with other major prizes the world over. A Classic Causeway, indeed.

Very exciting to see Classic Causeway win the Gr.2 Tampa Bay Derby last night! He’s been practising his explosive gate speed since he was a yearling at Ashford Stud