Tales from the Crib: Enforceable

Aug 30, 2020 Kellie Reilly/Brisnet.com
Tweet
“She is the gift that keeps on giving to us.”
Rightly does Bernard Cleary, owner of Clearsky Farms, describe the routine excellence of broodmare Justwhistledixie. Not only are her first five foals all winners, but four are graded stakes victors, and three have played a role in the Kentucky Derby (G1) – New Year’s Day, Mohaymen, and now her current 3-year-old, Enforceable.
Justwhistledixie, a daughter of Dixie Union, was a multiple Grade 2 heroine on the 2009 Kentucky Oaks (G1) trail herself for West Point Thoroughbred and partners. Riding a five-race winning streak, she was the 5-2 second choice on the morning line to that year’s overwhelming Oaks favorite, Rachel Alexandra. Unfortunately, Justwhistledixie came up with a bruise in her left front hoof and had to scratch. She raced twice more that season, placing second in both the Acorn (G1) and Top Flight (G2). After a trio of fourths as a 4-year-old, she was retired with career earnings of $449,427.

Joining the Clearsky broodmare band, Justwhistledixie hit a home run with her very first foal, New Year’s Day, who landed the 2013 Breeders’ Cup Juvenile (G1). The son of Street Cry held out great promise as a potential Derby contender, but sustained a career-ending injury at the end of his 2-year-old season. New Year’s Day has made an impact on the Derby in another way, by siring champion Maximum Security, the first-past-the-post in 2019 who was disqualified for interference.

Mohaymen, Justwhistledixie’s $2.2 million Tapit colt, got the “Tales from the Crib” treatment ahead of the 2016 Derby. Hero of the Nashua (G2), Remsen (G2), Holy Bull (G2), and Fountain of Youth (G2), Mohaymen suffered his first loss when fourth in the Florida Derby (G1). The gray was fourth to the same rival, Nyquist, in the Run for the Roses.
A few days before the 2016 Florida Derby, Justwhistledixie produced another Tapit colt, Kingly (a bay who later enhanced his dam’s record by winning the 2019 La Jolla H. [G3] on the Del Mar turf). That spring, she was bred right back to the same leading sire. 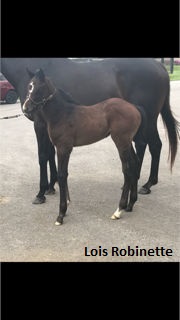 Her colt foaled on April 3, 2017, would turn the same color as Mohaymen – gray like Tapit. Until then, Enforceable sported a distinctive facial marking that gradually blended in as his coat changed.
“He was always straightforward and liked by the staff at the farm,” Cleary commented. “We had high hopes for him from day one, especially after what his half-brother New Year’s Day and full brother Mohaymen did.”
Like them, Enforceable also toured the ring as a Keeneland September yearling. New Year’s Day had sold for $425,000 back in 2012, and considering that Mohaymen was the joint sales topper in 2014, the latest in the series figured to be in high demand.
The bidding rose to $775,000, but that didn’t meet his reserve price. Quick to move at the opportunity was Justin Casse, the brother of trainer Mark Casse, who is active on the sales scene.
“He RNA’d at the sale, which we were surprised at,” Cleary revealed, “but Justin Casse loved him and came up to us as soon as he knew he didn’t sell and bought him.”
The colt was secured for owner John C. Oxley, whose past stars include 2001 Kentucky Derby winner Monarchos as well as champions Beautiful Pleasure and Classic Empire. Eventually named Enforceable, he went to school at the Casse Training Center in Ocala, Florida. The juvenile began recording published works in March, graduated to the Churchill Downs string by April, and debuted on May 2, 2019 – “Thurby” as the Thursday of Derby Week is dubbed – with a second-place effort.
Enforceable hit his stride later in the summer in a 1 1/8-mile maiden at Saratoga, where he savored the longer distance to score his first win. Competing in a series of Derby points races ever since, Enforceable does his best work late, as in his signature victory in the Lecomte (G3) at Fair Grounds. He hopes for a robust pace to set up his closing kick and make the year even more memorable for Mark Casse, who was voted into the U.S. Racing Hall of Fame.
Back at Clearsky, Justwhistledixie continues to add to her family while laying a foundation for the future. She’s had two more colts, a 2-year-old named Irish Unity (by Pioneerof the Nile) in training with Bob Baffert, and a weanling by Quality Road (to whom she is safely back in foal).
Justwhistledixie has also furnished a filly to carry on her maternal line. Now a yearling, she was already valuable as Justwhistledixie’s daughter by champion Arrogate, himself bred by Clearsky. But with the tragically premature death of Arrogate this year, the filly is irreplaceable. No sales ring is in her future, for Clearsky is keeping her as a priceless heirloom.
Foal photo courtesy of Lois Robinette of Clearsky Farms 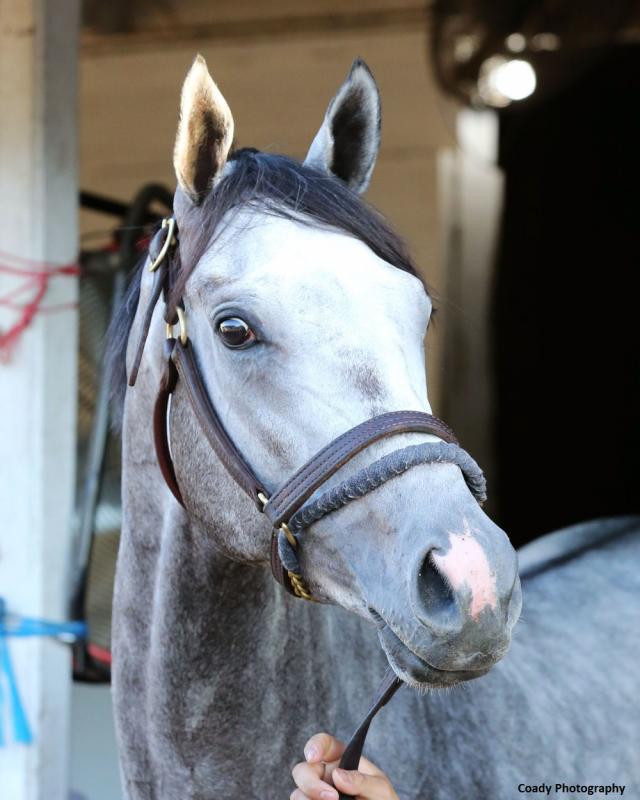