Tales from the Crib: Fast and Accurate

Fast and Accurate will try to become the third Pennsylvania-bred to wear the roses, after Lil E. Tee (1992) and Smarty Jones (2004). But although he was foaled in the Keystone State, the gray colt grew up in the Bluegrass, at his breeder John R. Penn’s farm near Paris, Kentucky.

One of two 2017 Kentucky Derby (G1) runners raised by Penn, along with the Ray Hanson-bred Lookin at Lee, Fast and Accurate gets his coat color from his sire. He’s from the first crop sired by 2011 champion two-year-old colt Hansen, who stood one season at Coolmore’s Ashford Stud near Versailles, Kentucky, before being exported to South Korea.

But in her last trip through the Keeneland sales ring, It’s Heidi’s Dance sold for a mere $8,000 back in November 2005. She was overlooked despite the fact that her half-brother, Bwana Charlie, had won the Amsterdam (G2) at Saratoga and Lafayette (G3) at Keeneland in 2004. Another half-sibling, Ten Halos, was stakes-placed during her 2005 juvenile campaign, and would go on to add two more stakes placings the following year.

Penn, who bred Ten Halos and owned their dam Shahalo, acquired It’s Heidi’s Dance. That move took on greater resonance after Shahalo kept delivering graded stakes winners. Her next two foals after Ten Halos were Bwana Bull, the 2007 El Camino Real Derby (G3) victor who bankrolled $526,382, and My Pal Charlie, an earner of $762,519 after capturing the 2008 Super Derby (G2) and placing in such major races as the Louisiana Derby (G2).

While Penn had sold Bwana Bull for $75,000 as a Keeneland November weanling, and My Pal Charlie for $300,000 as a yearling at Keeneland September, their success made Shahalo’s subsequent foals more attractive at the sales. A full sister to My Pal Charlie commanded $460,000 in 2008, and Shahalo’s last yearling brought $350,000 in 2013.

“Shahalo’s putting my kids through school!” Penn said of the successful broodmare.

It’s Heidi’s Dance hadn’t come up with a stakes winner until Fast and Accurate, but she was consistently producing winners, including the Peruvian stakes-placed Lady Gi.

Since It’s Heidi’s Dance isn’t an overly big mare herself, Penn would “tend to breed her to a larger horse,” but made an exception in Hansen’s case.

“Hansen’s a beautiful individual, but not very big.”

Accordingly, her Hansen baby was “a little bit smaller” than her other foals.

Fast and Accurate was born on March 27, 2014, at Leigh Herzberger’s Heart Hill Farms near Cochranton, Pennsylvania.

But how did that come to pass?

Penn explained that his son, Alex, is married to Herzberger’s daughter, Kendra. As a result, some Penn mares are sent to foal in Pennsylvania, where their offspring can be made eligible for the breeders’ awards program. Then the mares come back to Kentucky to be bred and raise their foals.

Thus the plot twist that the Pennsylvania-bred’s breeder named “Penn” is actually a Kentuckian. You might say that Fast and Accurate is a “Penn bred” in more ways than one.

Growing up on the Penns’ Bourbon County farm, Fast and Accurate was an entirely different type from his contemporary Lookin at Lee (whose Tale is here): a “smaller, typier horse, more Arab-ish” in appearance, the Hansen colt was closer to the finished article than his bigger bay buddy.

Both yearlings were consigned to Keeneland September by the family’s Penn Sales, but Fast and Accurate had a tough time appealing to potential buyers. He ended up failing to sell when bidding stalled at $24,000.

“He was one of those horses, who the vets looked at at the sales, and thought he’d never stand training,” Penn said. “But most of the issues were resolved by the time he was two.”

Penn accordingly began to prepare him for another sale, this time the Ocala Breeders’ Sales Company April Sale of two-year-olds in training. 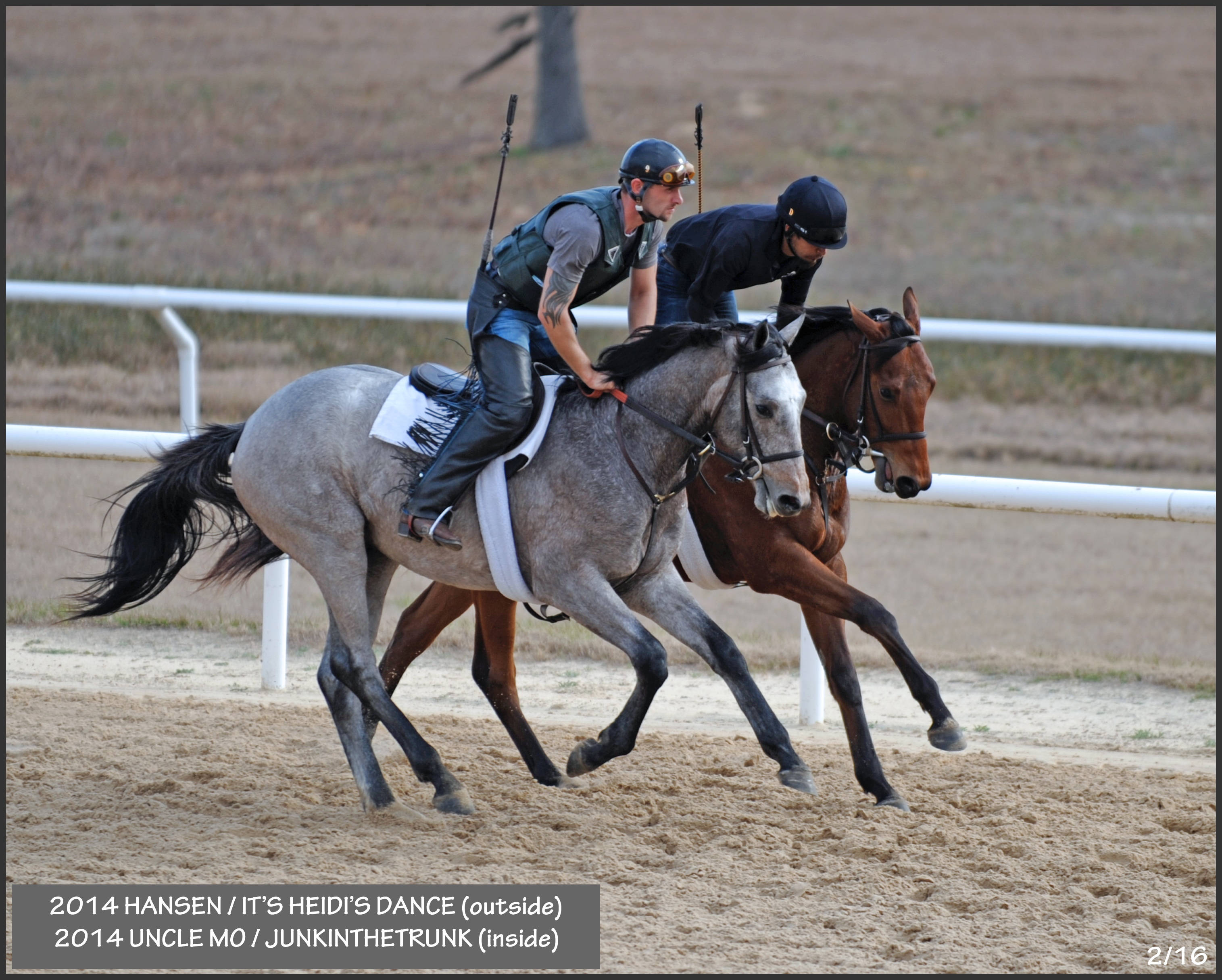 The yet-unnamed juvenile traveled to consignor Ciaran Dunne’s Wavertree Stables near Ocala, Florida, to polish off his sales prep.

“The Penns started him in Kentucky before sending him down to us, and he arrived in here well schooled and with a very easy-going disposition,” Dunne said, noting that he was “very straightforward as a young horse.”

As a measure of how his physicals had improved since his yearling days, the colt sold for $85,000 to Dr. Kendall Hansen, who’d owned and bred his sire Hansen, named after himself. He gave his new recruit the moniker Fast and Accurate.

At the under tack show, where the youngsters try to impress with a timed work ahead of the sale, the gray had scampered one furlong in :10 2/5.

Since he was “always a forward training colt,” Dunne remarked, “we actually were expecting a slightly quicker work from him at the sale, but it seemed he liked our dirt track at the farm slightly better than the synthetic one at OBS.”

That insight could be particularly significant, considering that Fast and Accurate earned his Derby points in the Spiral (G3) over Turfway’s Polytrack. He had been unplaced in his sole try on dirt, but that was some time ago, so his race record leaves the surface question unresolved.

Penn has an amusing story about the Spiral aftermath.

“About 30 seconds after Fast and Accurate crossed the wire in the Spiral, my wife asks, ‘How many breeders’ awards do we get? How much money?’

That’s because the Pennsylvania-bred breeders’ awards are paid for top-three finishes in pari-mutuel races in the state, not out of state.

“Then my wife started beating me, saying ‘why did you do that?!’”

The really perplexing question, however, was why Fast and Accurate hadn’t been nominated to the Triple Crown by his racing connections. Even the late nomination period didn’t close until March 20. By missing that deadline, Fast and Accurate has to be supplemented at a cost of $200,000.

Dr. Hansen has since sold minority interests in the colt. Harvey Diamond’s Skychai Racing purchased 27 percent of Fast and Accurate immediately after the Spiral. History was repeating itself: Skychai’s partners had similarly bought a minority interest in Hansen after his romp in the Kentucky Cup Juvenile – also at Turfway – and before his championship-clinching victory in the Breeders’ Cup Juvenile (G1).

Fast and Accurate has added more co-owners in the interim. Skychai in turn sold 2.5 percent of its interest to another entity, Sand Dollar. Also, Bode Miller, of Olympic skiing fame, bought 1 percent from Dr. Hansen, who remains the majority owner with a 72 percent stake.

Diamond specifically mentioned the Pennsylvania-bred angle as an incentive to buy into Fast and Accurate, which was music to Penn’s ears.

“Hopefully if there’s any justice, I hope he goes to Pennsylvania to race,” Penn said, adding how much it would mean if he could run well in the lucrative Pennsylvania Derby this fall.

Thus a tilt at the Pennsylvania Derby, newly upgraded to Grade 1 status for 2017, would be an attractive target for all of Fast and Accurate’s connections. First, though, he’ll try to recoup the investment on the first Saturday in May. 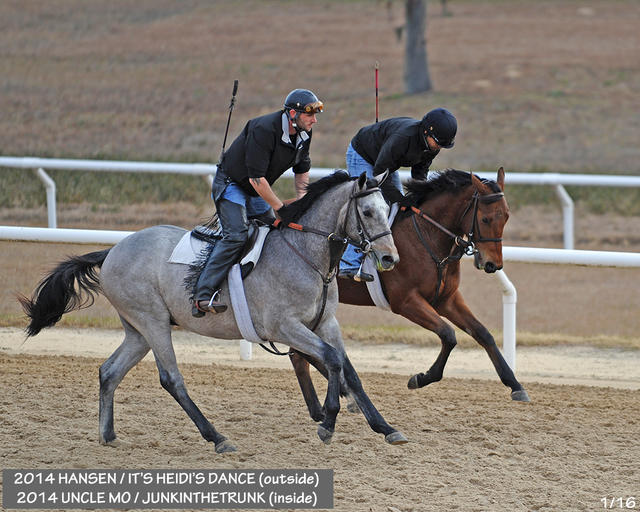