Tales from the Crib: Girvin 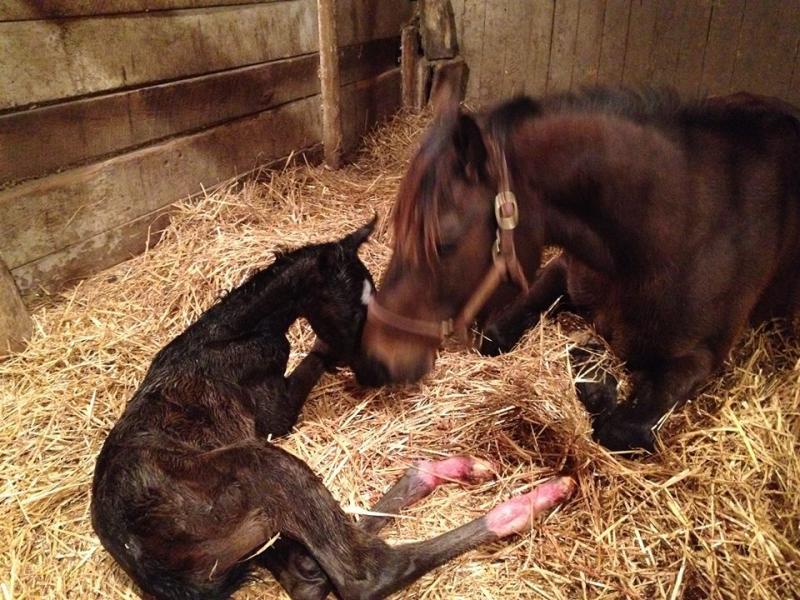 Breeding racehorses might feel like you’re throwing darts, just hoping to hit a target, but in Girvin’s case, it literally happened that way. If it weren’t for a Darby Dan Farm party in late 2012, and a providential dart landing on a certain triangle on the dartboard, the Kentucky Derby (G1) points leader would never have been born.

Bob Austin of Little River Farm received his party invitation from Darby Dan, a creative enticement to attend that included a dart. At the party, breeders would have the opportunity to throw the dart in hopes of winning a free season to one of the Darby Dan stallions.

“Shackleford was the bullseye and the others were placed around him” on the dartboard, Austin recalled.

As he stepped forward to throw, Austin’s dart landed on the spot marked “Tale of Ekati.” A beautifully bred grandson of Storm Cat and Sunday Silence, Tale of Ekati captured the 2008 Wood Memorial (G1) and Cigar Mile (G1) and finished fourth to Big Brown in that year’s Kentucky Derby.

“When you’re throwing at a dart board, and haven’t done it for years and years,” Austin said, “you’re just hoping to hit the board, let alone hit a little triangle!”

That was the first stroke of luck. But Austin didn’t have another mare to breed in the upcoming 2013 season. His handful of mares were already booked to other stallions, so Austin went to the Keeneland January Horses of All Ages Sale to buy another one who could visit Tale of Ekati.

The second stroke of luck was snapping up Catch the Moon, a four-year-old daughter of Malibu Moon carrying her first foal, for $30,000. Austin’s business partner, John Witte, also got involved in the mare, and the two thereby became co-breeders of Girvin.

“The first thing I always look for in a mare is sire power. Like a lot of people, I’m a big Malibu Moon fan, and she was out of a stakes-winning daughter of Yes It’s True. I’ve always loved Yes It’s True. The mare was really pretty.

Few could have prognosticated just how good a buy Catch the Moon was. Her first foal, by Colonel John, turned out to be Grade 3 winner Cocked and Loaded. Sold for just $16,000 as a Keeneland September yearling, Cocked and Loaded set a new track record in his career debut at Keeneland, captured the 2015 Iroquois (G3) and Tremont, finished a creditable fifth in the Breeders’ Cup Juvenile (G1), and is still adding to a bankroll that’s nearing $500,000.

By the time Cocked and Loaded was bursting onto the scene at two, Catch the Moon’s colt by Tale of Ekati was growing into a handsome yearling. Austin at the time told Keeneland publicity that he was “the best horse I’ve raised since My Miss Storm Cat.”

My Miss Storm Cat, who won five of seven career starts including the 2006 Desert Stormer H. at old Hollywood Park, would later become famous as the dam of 2011 champion two-year-old filly My Miss Aurelia. 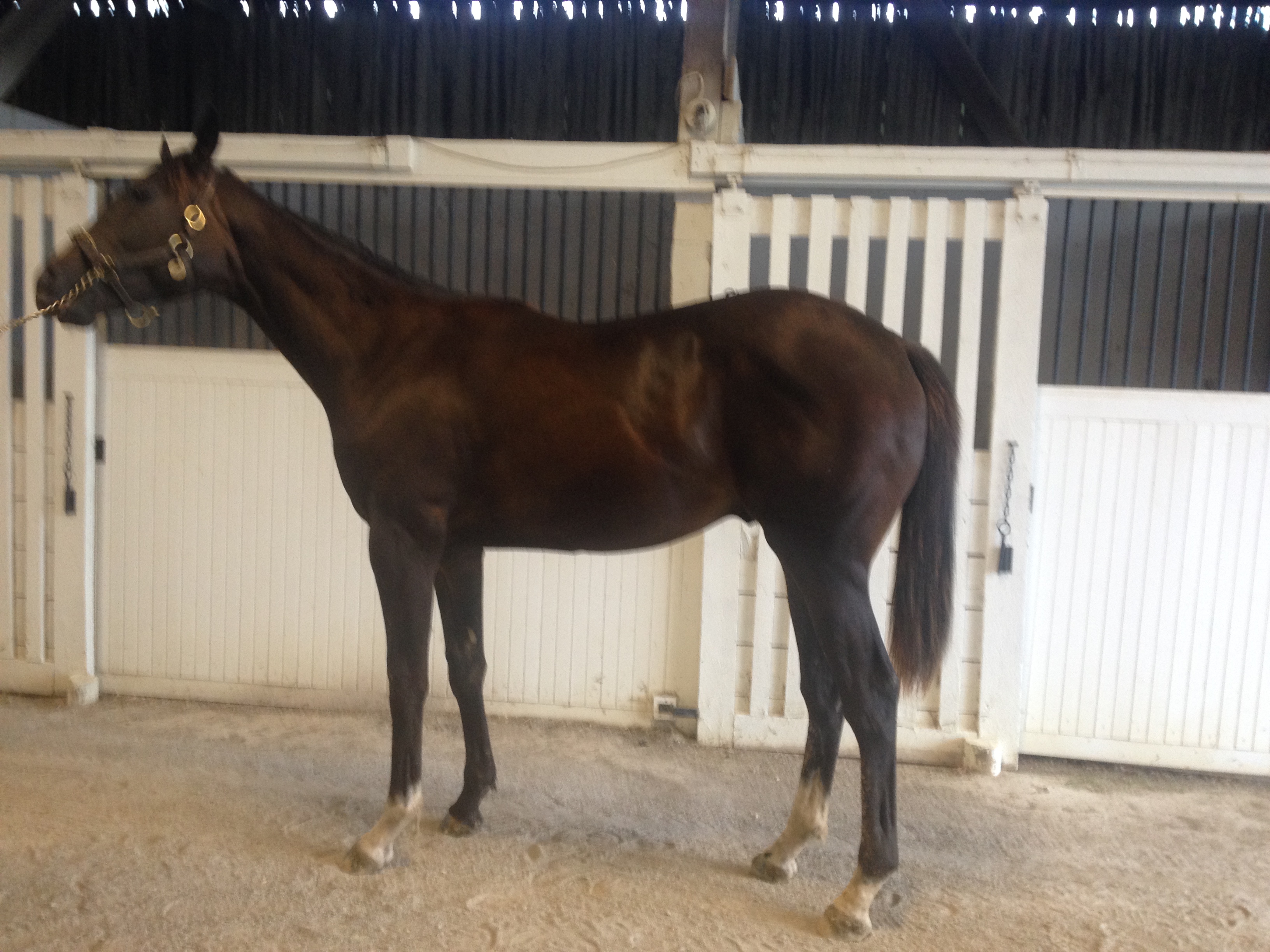 Austin elaborated on the comparison, noting what a good looker the Tale of Ekati colt was

“Conformation-wise, he was always a beautiful, beautiful colt. Very classy, but a handful. He had a beautiful shoulder, neck, head – everything about him was pretty from day one.”

As a youngster growing up on the farm, Girvin had exuberance to match his looks.

“He always had a personality,” recalled Legacy Bloodstock’s Tommy Eastham, a longtime friend and associate of Austin who consigned the colt to the yearling sales.

“He’s not mean, but he’s extremely playful – like a 700-pound, three-month-old Labrador puppy. He had a whole lot to deal with.

“By the time you got the gate latched, something would be sniffling on your ear, and it would be his muzzle.” 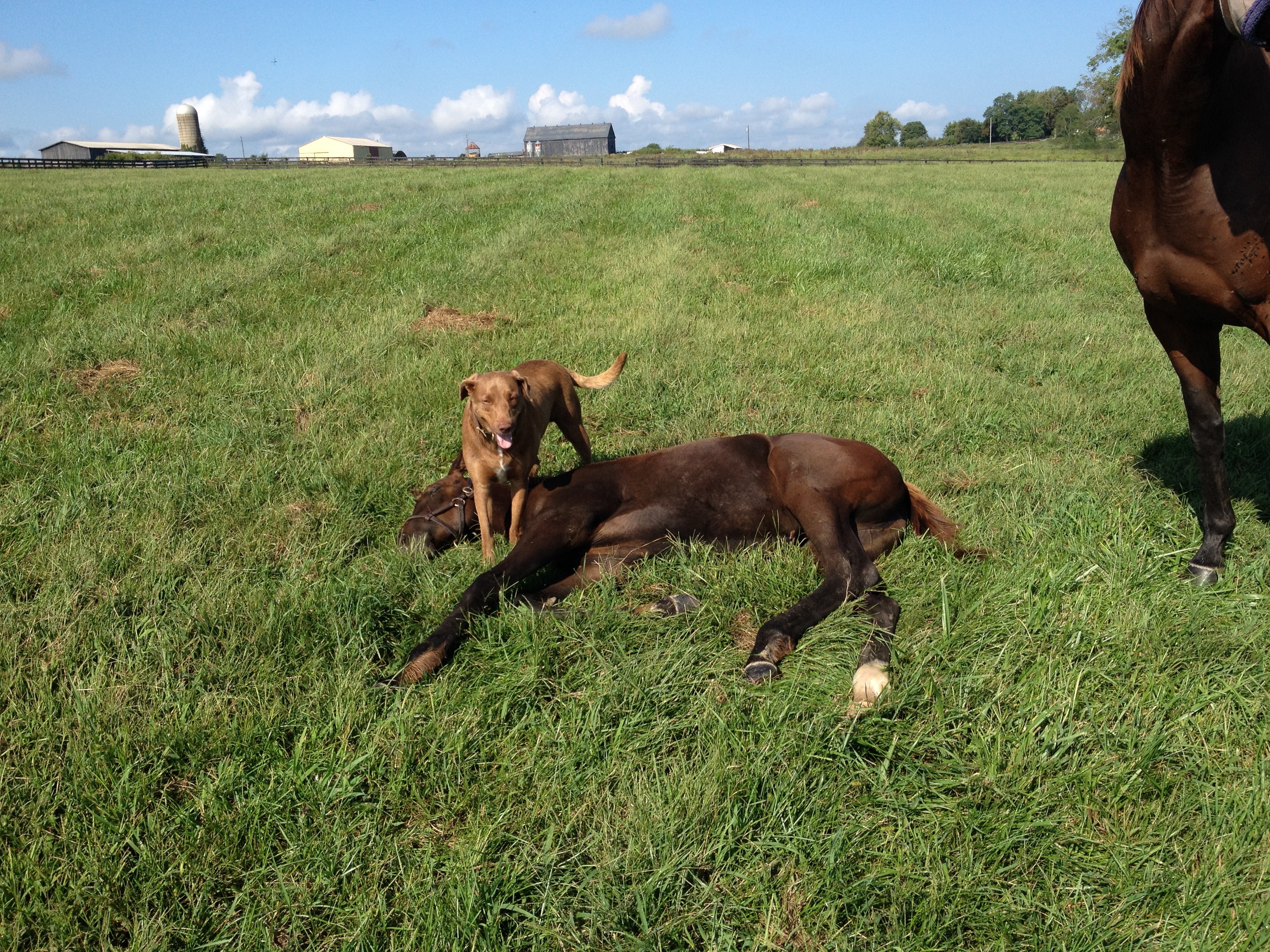 One of his paddock mates was actually Austin’s dog, Duke. Known to sleep on top of the foals in the field, Duke liked to use them as a fuzzy pillow. (Here he is pictured with a Dialed In filly, a half-sister to multiple stakes winner and Grade 2-placed King Kranz.)

“He’d go and find a foal to lie on,” Eastham said.

Duke “was the darndest dog,” Austin said, adding that he would lie on the teaser’s back too.

As the Tale of Ekati colt reached the summer of his yearling year, he was becoming a physical specimen.

“He really started taking off and developing” by August, Eastham said. “At (Keeneland) September, he was nice, but at the last two weeks of prepping, he accelerated.

By that point, Eastham thought, “I don’t think he’s at his best yet.”

The colt had “a lot of frame, really good hip structure…pretty angle to his shoulder, good length of neck,” and he was “growing length of bone more than muscle.”

That profile made him a good “pinhook” type – a horse bought as a prospect for resale at a later auction.

Enter Brad Grady and his adviser, Bobby Dodd. Also friends of Eastham, they were scouting out yearlings at the Keeneland September Sale with a view toward offering them at the two-year-olds in training sales. They bid on the Tale of Ekati colt – but only up to a certain point.

“I did look at him at Keeneland September,” Grady said.

“We set a budget, where we feel we can make money, since we buy to resell. We thought he was a little lofty for what he was.”

Part of that calculation involved the fact that Tale of Ekati was “not the most fashionable sire,” as Grady phrased it.

But they’d have another crack at him a month later at the Fasig-Tipton Kentucky Fall Yearlings Sale, and Dodd saw an improved prospect.

“Bobby went on to shop him at Fasig-Tipton October,” Grady said. “I couldn’t make it, but he called me and said that Tale of Ekati-Catch the Moon colt, the half to Cocked and Loaded (and we liked Cocked and Loaded), had gotten better in a month. He is good-looking, getting stronger and bigger.

Dodd told Grady, “We need to try to buy this horse.”

Bidding while on the phone with Grady, Dodd indeed purchased him for $130,000.

“Really correct, strong, two-turn looking horse,” Grady noted. “If he’d been by any other sire, he would have brought a lot more!” 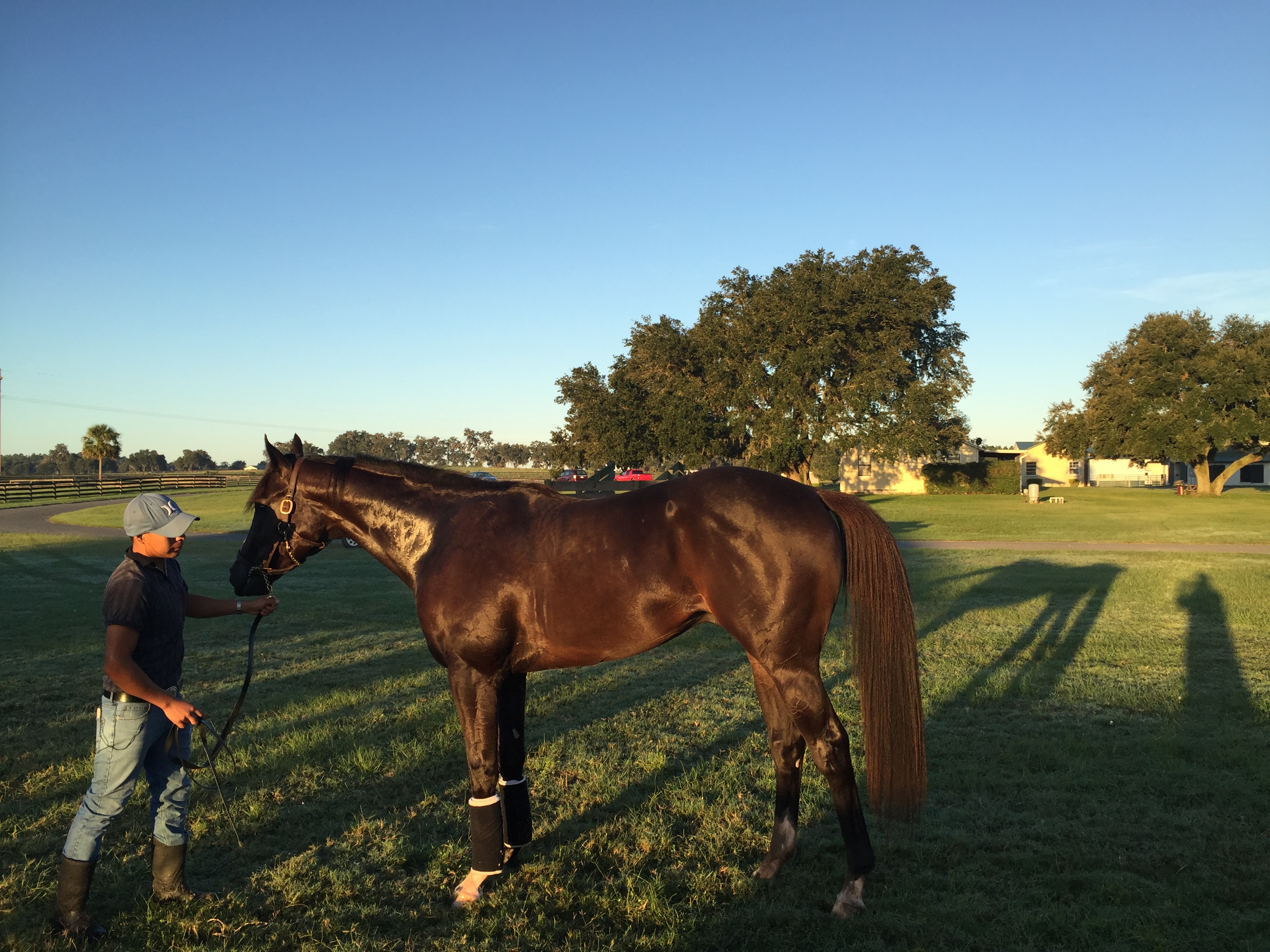 The yet-unnamed colt went to Grady’s Grand Oaks near Reddick, Florida, for his early education with Dodd, a horseman with decades of experience in developing and selling promising prospects.

Grady, a Texas entrepreneur with a background in livestock, has been investing in Thoroughbreds for just the past few years. He’s found in Dodd a teacher as well as counselor.

“I was in Bobby’s hip pocket, asking more questions than a normal person would,” Grady said. “Bobby taught me a lot about how to look at a horse.”

Grady has learned well, for he found another prospect – who turned out to be Blue Grass (G2) winner Irap (read his Tale here), now a Derby rival of Girvin.

“I probably liked the horse (Irap) a shot more at the sale than Bobby did. He was kind of out of sorts, a young kid, at a chubby stage, pot-bellied. He needed to be tightened up.”

In that respect, he presented a contrast with Girvin.

“Girvin was like a ‘now’ horse as a yearling – you could see what you had.

“Irap was a little more late-developing. But Irap had all the parts – he was correct, a great hip, shoulder, long neck. He just needed to be tucked up.”

Girvin was scheduled to sell at the same venue in April.

“Bobby really liked him at the farm,” Grady said, adding that he’d “prepped really well” ahead of the sale.

But right before the colt would get his chance to show off at the under tack show, he met with a setback.

“He got a cut on the back of his coronet band,” Grady said, recalling that Dodd told him “the leg’s ‘blown up.’ We have to scratch him and take him to another sale.”

The yet-unnamed colt was also cataloged for Fasig-Tipton Midlantic at Timonium, Maryland in May. But he still wasn’t right, in Dodd’s judgment, to breeze or sell there, as Grady recounted.

“Bobby didn’t feel comfortable training to get him prepared for the sale. He said, ‘This is a really nice horse – I don’t want to mess him up.

“I don’t have him in the OBS June Sale, so you’ve gotta keep him and run him.”

Grady said he was fine with that decision, since he does have a few runners. But this was a different scenario from any he’d encountered before:

“I have never gotten to run one that Bobby raved so much about.”

Dodd turned Girvin out for 60 days at the farm before putting him back in training, and that decision was probably the making of him. Were it not for Dodd’s expert horsemanship, Girvin would probably not have developed into the Risen Star (G2) and Louisiana Derby (G2) winner.

“A great horseman his whole life. Bobby Dodd is one of the best,” was how Legacy Bloodstock’s Eastham summed it up. “He’s very intent, paying a lot of attention to his horses. He’s three-quarters horse himself!

“He saw something in that colt: ‘It’s not time to fold on him.’’

Aside from crediting Dodd, Eastham also credits Grady for being patient and “not rushing the process.”

Dodd’s reputation gave Girvin an important seal of approval once he was ready to graduate to his trainer Joe Sharp.

“Bobby told me that he’s one of the nicest horses that they’d ever sent off the farm up to that point,” Sharp revealed on a March 28 NTRA conference call with racing media, “and, you know, Bobby doesn’t give that out often. So, with that, when he showed up we already had some high expectations.”

Grady now had the task of trying to name the colt, finally hitting upon the name of his Texas hometown – Girvin. 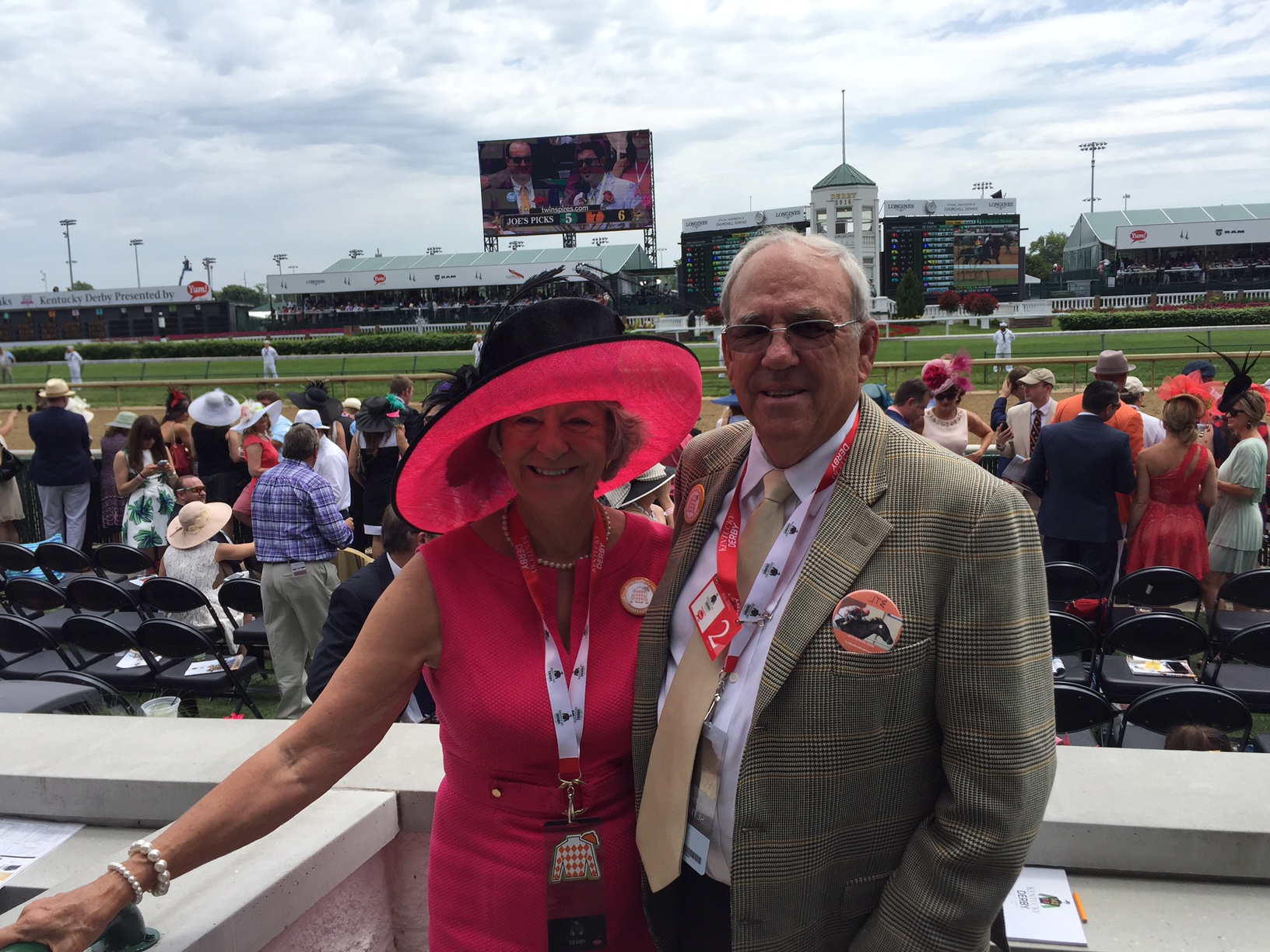 Austin (pictured with wife, Alice), who’s kept in touch with Team Girvin, observed how the twists and turns of the business can end up being providential.

“He had two setbacks!” he recalled of the colt’s being withdrawn from two sales. “Funny how things work out…You think, ‘what a disaster,’ and it turns out to be a gold mine.

“The Gradys are really nice people. I’m glad to see them having this experience.”

If Austin has a regret, it’s selling Catch the Moon for $240,000 at Keeneland in November 2015, hot on the heels of Cocked and Loaded’s fine season and after Girvin shaped as such a strong yearling. He and his wife, Alice, wanted to retire from the rigors of maintaining the farm. They sold their Little River property and moved to The Villages, retaining a couple of mares but not Catch the Moon, whose price helped to facilitate their retirement.

“Disappointed that I sold the mare,” Austin said. “My wife was kicking me all the time!

Yet Austin’s regret is tempered by the knowledge of how fortunate he was.

“It’s a big gamble, and sometimes it works. I’m really thankful that it did.”

If Girvin knew his whole Tale, he’d be grateful too. Thanks to that fateful guidance of the dart, we get to enjoy this “pretty sweet” and “very smart” horse, as Grady describes him.

“It seems like he knows when he started winning these big races – he got a little full of himself! He’s like a 16-year-old boy right now, got some muscles on him, and he’s sticking his chest out.”

Photos of Girvin as a yearling and two-year-old, Duke the dog, and the Austins courtesy of Bob Austin 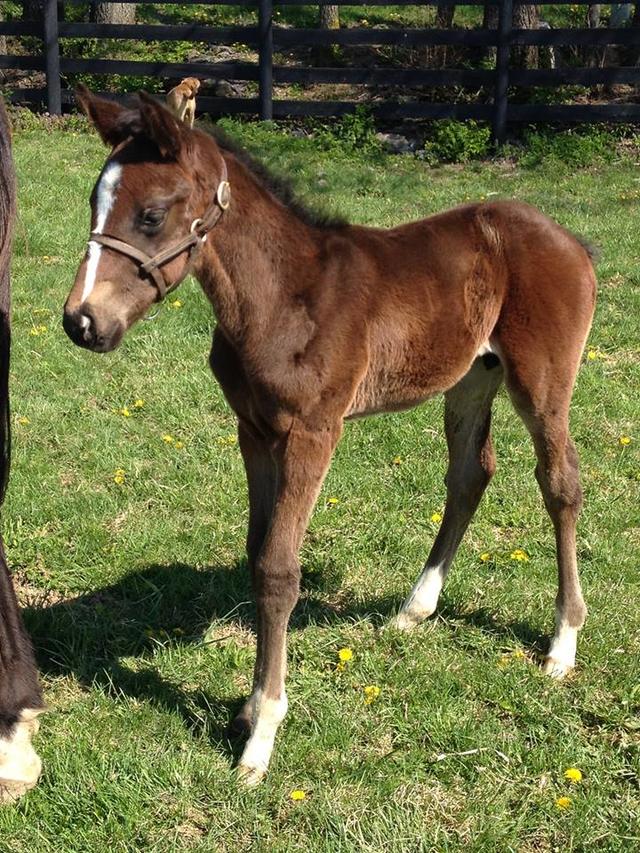