Tales from the Crib: Royal Mo

Royal Mo has been a king-size beauty from the beginning.

The striking bay colt is one of two 2017 Kentucky Derby (G1) contenders bred and raised by Jim and Pam Robinson’s Brandywine Farm, along with Gunnevera (see his “Tale from the Crib” here.)

Royal Mo is by champion Uncle Mo, the early favorite for the 2011 Derby who was withdrawn due to illness. Uncle Mo later gained compensation by siring 2016 Derby star Nyquist in his first crop.

Royal Mo’s dam, Royal Irish Lass, was already on the books as a stakes producer when selling for $210,000 at the Keeneland November Breeding Stock Sale in 2012. That season, her two-year-old daughter Tara from the Cape captured a turf stakes at Delaware Park before finishing fourth in the Breeders’ Cup Juvenile Fillies Turf (G1). Although Royal Irish Lass wasn’t in foal at sales time, she entered the Keeneland auction ring as a promising young broodmare with plenty of potential.

After visiting Uncle Mo during the 2013 breeding season, Royal Irish Lass gave birth to a beautiful baby at Brandywine on Valentine’s Day 2014.

“A big, strong colt that everyone who saw him – from the time he was born up to the time he sold as a yearling – loved him,” Pam Robinson recalled.

“A handsome guy from the time he hit the ground. He just continued to grow.

“He’s a big boy now,” she added of the three-year-old colt who stands almost 17 hands tall.

Offered by Brandywine at the 2015 Keeneland September Yearling Sale, the yet-unnamed colt commanded $300,000 from Mr. and Mrs. J.S. Moss.

Less formally, that’s Jerry and Anne Moss, best known as the owners of Hall of Famer and fantastically popular racemare Zenyatta. They’ve also won the Kentucky Derby with homebred Giacomo, the 50-1 surprise package of 2005, and have another prospect currently on the trail in Gormley (whose Tale is forthcoming). John Shirreffs has trained them all.

Royal Mo received his education from the McKathan Brothers Training Center near Ocala, Florida – the “school” responsible for a host of top performers. Their honor roll includes Hall of Famer Silver Charm, the 1997 Derby/Preakness (G1) hero; Real Quiet, who similarly came oh-so-close to a Triple Crown sweep in 1998; and finally, a Triple Crown champion in American Pharoah.

The new student had one trait reminiscent of American Pharoah, according to farm manager Chris Alexander: you had to get him out on the track early in the morning.

Unlike stablemate Gormley, Royal Mo was “a little more like ‘Pharoah,’ in that you had to train him a little early or he’d fall asleep,” Alexander said. “If you got there at 8:30, he’d be asleep in his stall. You’d have to wake him up, brush all the shavings off…

But Royal Mo was no sleepy customer in his training.

“A beast from the get-go,” was how Alexander described him.

The frequent reaction was “Damn, look at that! He showed himself off every day.”

Indeed, it was a positive sign for such a big horse to go so well at such an early stage. Normally for a colt of his size, you’d expect him to be a little awkward as he learns how to become more coordinated in his big frame.

Royal Mo’s fluent homework marked him out as “very, very talented,” an ability that Jerry Moss picked up on during a visit to the training center.

“Mr. Moss came to the farm when we were breezing them one day,” Alexander recalled. “He was sitting in his chair, just watching the horses go by. When he saw Royal Mo go by, he stood up and said, ‘That one looks nice.’”

As the time neared for Royal Mo and Gormley to graduate from the training center to the racetrack, the ever-patient Shirreffs told Alexander there was no rush.

“When they went out to John, he said, ‘Don’t send them until they’re ready.’”

After Royal Mo arrived at Santa Anita, Shirreffs started him out with half-mile moves last June, and liked what he saw straightaway.

In keeping with his take-it-slow philosophy, Shirreffs wanted to give Royal Mo the time to develop and strengthen, knowing that it would serve him well in the long run.

“He started setting him up for where he is now,” Alexander added of Royal Mo’s presence on the Derby trail.

Shirreffs also gave rave reviews of Royal Mo to the Brandywine folks – at length – when he was in Lexington for last year’s Keeneland September sale.

“He spent 30 minutes at our Keeneland September barn saying how much he liked him,” Robinson said. “David Ingordo liked him a lot.”

Ingordo is the Mosses’ bloodstock advisor who famously bought Zenyatta for just $60,000 at Keeneland September in 2005. His mother is none other than Dottie Ingordo-Shirreffs, the Mosses’ racing manager and trainer John’s wife, making for a close-knit family connection.

Team Shirreffs is looking toward a bright future for Royal Mo. The only question is whether that will come to fruition as soon as the first Saturday in May, or if we won’t see the best of him until later in the season.

“He hasn’t gotten to his best yet…he’s still growing,” Robinson summed up. “He’s nowhere near reached his full potential yet.

“It takes a while for the center of the basketball team to catch up with the guards.”

Robinson knows that Royal Mo couldn’t be in better hands as he auditions for the Derby:

Royal Mo will try to take the next step in Saturday’s Rebel (G2) at Oaklawn Park, his first start outside of California. But with his profile, whatever happens on March 18, the best is yet to come. 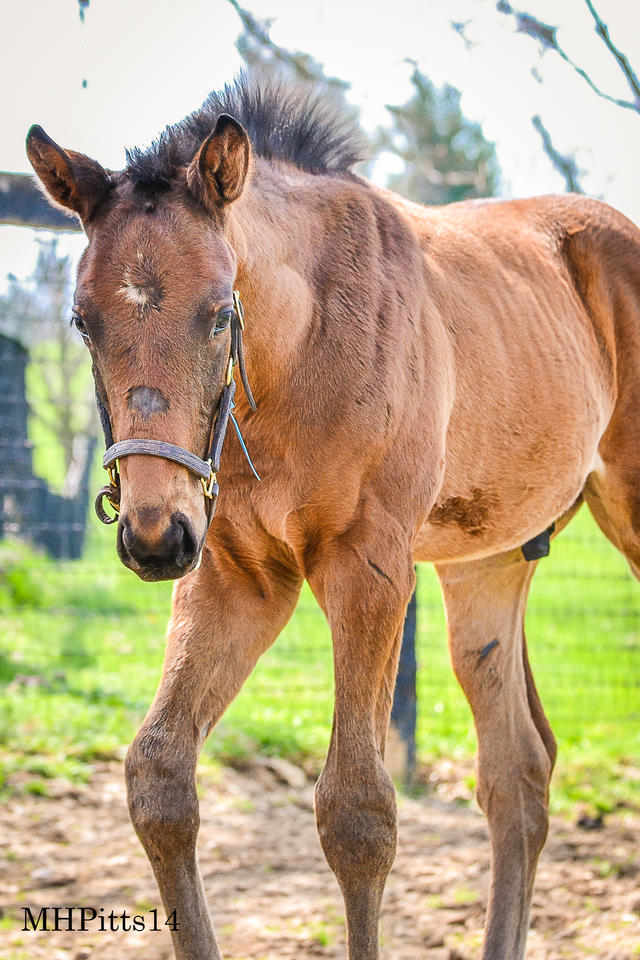