Tales from the Crib: Simplification

May 5, 2022 Kellie Reilly/Brisnet.com
Tweet
The single Florida-bred in Saturday’s Kentucky Derby (G1), Simplification represents the Sunshine State in more ways than one. Owners Tami Bobo and Tristan de Meric are likewise from Ocala, and he’s raced exclusively at Gulfstream Park so far.
Simplification’s breeders, France and Irwin Weiner, came within a half-length of Derby glory in 2005. The Weiner-bred Closing Argument just missed to Giacomo. Yet there was a silver lining for Ocala; Giacomo was himself a son of Florida-bred Hall of Famer Holy Bull.
Simplification’s tale begins in Kentucky, where his dam, Simply Confection, was offered at the 2017 Keeneland January Sale. A beautifully-bred filly by Candy Ride and out of a full sister to Hall of Famer Ashado, Simply Confection won three of 15 starts. She turned in her most notable results at Churchill Downs as a juvenile in 2014, when runner-up in the Rags to Riches S. and an allowance winner over future Grade 2 victress Keen Pauline and eventual $2.3 million-earner I’m a Chatterbox.
As Simply Confection toured the auction ring, Albaugh Family Stables was looking for potential mates for their recently-retired colt Not This Time. The runner-up as the 2.80-1 favorite in the 2016 Breeders’ Cup Juvenile (G1), Not This Time unfortunately exited with an injury that ended his budding career. The son of “Iron Horse” Giant’s Causeway was entering stud at Taylor Made Stallions near Nicholasville, Kentucky.
Simply Confection, part of the Taylor Made Sales Agency consignment, appeared a good match. Thus she sold for $90,000, and the Albaugh Family’s intent was clear in how the sales ticket was signed – “Not This Time – A. F. S.”
Although Simply Confection sadly lost the foal who would have been born in 2018, she got back in foal to Not This Time with a happier result. Connections put her up for sale via the Taylor Made draft at Keeneland November in 2018, and France Weiner purchased her for $80,000.
Florida-based Weiner sent Simply Confection to the Sunshine State, where she took up residence at the de Meric farm in Ocala. Tristan’s parents, Nick and Jacqui de Meric, have been training and selling young horses for 40 years. Now Tristan and his wife, Valerie, are making names for themselves in the industry.
Simply Confection delivered her bay colt on February 28, 2019. He would accompany his dam to her home state of Kentucky, where Simply Confection had a date with Mendelssohn. As a weanling that fall, he turned up in the Bluegrass again, as the Weiners were selling him at Keeneland November. Consigned by Taylor Made, as his dam had been, the colt didn’t reach his reserve price when bidding stopped at $50,000.

Led out unsold, the yet-unnamed youngster returned home to Ocala, under Tristan and Valerie’s care. There Bobo, who has a longstanding relationship with the de Merics, would purchase him privately with a view toward resale.

Bobo’s equestrian background was initially with Arabians and Quarter Horses. Applying her skills to Thoroughbreds for the past 12 years, she had high-profile success right off the bat with Take Charge Indy.

Also a private purchase after he failed to sell as a 2010 Keeneland September yearling, Take Charge Indy was developed by Bobo into a promising juvenile. She would sell him to Chuck and Maribeth Sandford, and watch him win the 2012 Florida Derby (G1). Take Charge Indy tried the Kentucky Derby, but was injured en route to a 19th-place finish. He bounced back later in the season, and at four, he added the Alysheba (G2) to his resume on 2013 Kentucky Oaks Day.

Take Charge Indy was a product of Bobo’s Secure Investments, the banner for her yearling-to-juvenile ventures. Bobo and her husband, Fernando de Jesus, have another vehicle for their younger prospects, weanlings slated for resale – First Finds, the program that yielded Simplification.

De Jesus observed that just as human beings are different, so horses have individuality that you can discern if you pay attention. Simplification exuded potential.

“He showed when he was a baby that he was a little different than most horses,” de Jesus said. “It’s what champions have. Some horses separate themselves from the others.

“Just the way he was moving, and the attitude he has, is different from a lot of these babies.”

Simplification could have advanced to the yearling auctions. Bobo ended up giving him more time and thinking of the two-year-old sales.

When the young Simplification was X-rayed ahead of potential sales engagements, he was found to have a bit of sesamoiditis. That was minor in itself, but any such imperfection will put off potential buyers.

“He had minor sesamoiditis,” Bobo told Ron Flatter in an interview aired on his March 18 podcast. “It wasn’t a major ordeal. It’s just part of the growing pains in young horses.”

Bobo decided to hold onto the colt, rather than risk a likely loss on investment. Those X-rays turned out to be a blessing in disguise.

Simplification acted like a classy colt in his early education, on Bobo’s farm as well as with the de Merics. After he graduated to trainer Antonio Sano at Gulfstream Park, the report card was even more glowing.

“Hats off to Antonio Sano on that,” Bobo said on the podcast. “Antonio called me 30 days after he had taken this horse…and he said this horse was very special.

“So from the beginning of time, we were looking for great things out of Simplification.”

Sano would know. Renowned as the all-time leading trainer in Venezuela, Sano was forced to leave his homeland after he endured a terrifying kidnapping in 2009. He was held by his captors for more than a month, until the ransom came.

Sano’s horsemanship has helped him build a new life in the United States. He is most often identified with his top performer, $5.5 million-earner Gunnevera, who competed in the 2017 Kentucky Derby and placed in such major races as the Travers (G1), Pegasus World Cup (G1), Dubai World Cup (G1), and Breeders’ Cup Classic (G1).

Simplification’s Oct. 1 debut, though, was a letdown amid his lofty expectations. Premiering on Gulfstream’s Tapeta track, he didn’t show much spark in an even fifth. The all-weather surface was likely not his favorite, and an entirely different colt would appear in his next race – on dirt.

In a six-furlong dash for state-breds on Oct. 23, Simplification turned heads in a 16 3/4-length rout, vindicating Sano’s assessment. His performance was backed up by the clock as well, with a time of 1:09.81 earning an excellent 103 Brisnet Speed rating for a maiden win.

Simplification was accordingly bet down to 3-10 favoritism in a Nov. 13 allowance at the same track and trip, but he faded to a disappointing third. Sano later told Gulfstream Park publicity that he hadn’t done as much in his training since he was on the cusp of a possible sale.

Once again, the real Simplification strutted his stuff in the Jan. 1 Mucho Macho Man S. The step up to a mile suited him well, and he delivered a powerful front-running victory by four lengths.

Simplification has had a similar pattern of bookending a big effort with losses on Gulfstream’s Road to the Kentucky Derby, but he’s run well every time, even in adverse circumstances. He missed the break in the Holy Bull (G3), putting him uncharacteristically behind. Yet Simplification adapted and rallied for second.

In the Fountain of Youth (G2), Simplification rated off the pace, and those tactics were key to his biggest victory so far. He reverted to his former on-the-pace style in the Florida Derby, pressing Classic Causeway early, with less success. While he fared much better than Classic Causeway, who retreated to last, Simplification was softened up in the battle and wound up third. Still, he was only beaten 2 1/4 lengths by White Abarrio, and more patient handling can engineer a turnaround on Derby Day.

Ironically, Gunnevera had compiled the same results ahead of his Derby tilt – second in the Holy Bull, a win in the Fountain of Youth, and a third in the Florida Derby. But Simplification has more gears than the grinding Gunnevera. Indeed, Sano recently told Gulfstream publicity that Simplification is a better colt.

Bobo likewise returns to the Derby, now enjoying the full ownership experience she didn’t have with Take Charge Indy. Tristan de Meric has come on board as a co-owner as well.

“He’s brought us so much happiness and fun, and he’s just been a joy to have,” Bobo told Flatter. “This horse has been solid. I mean, he’s very sound, very trainable horse, loves his job.

Bobo’s quotes from mid-March resonate just as strongly for the first Saturday in May.

“God has a plan, and whatever that is, will happen today. I’m a believer in that, and that’s kind of my philosophy in life. Everything happens for a reason.”

As Simplification prepares for his date with destiny at Churchill Downs, his dam isn’t far away. Simply Confection has been acquired by Bloodstock Investments, one of Taylor Made’s portfolios. 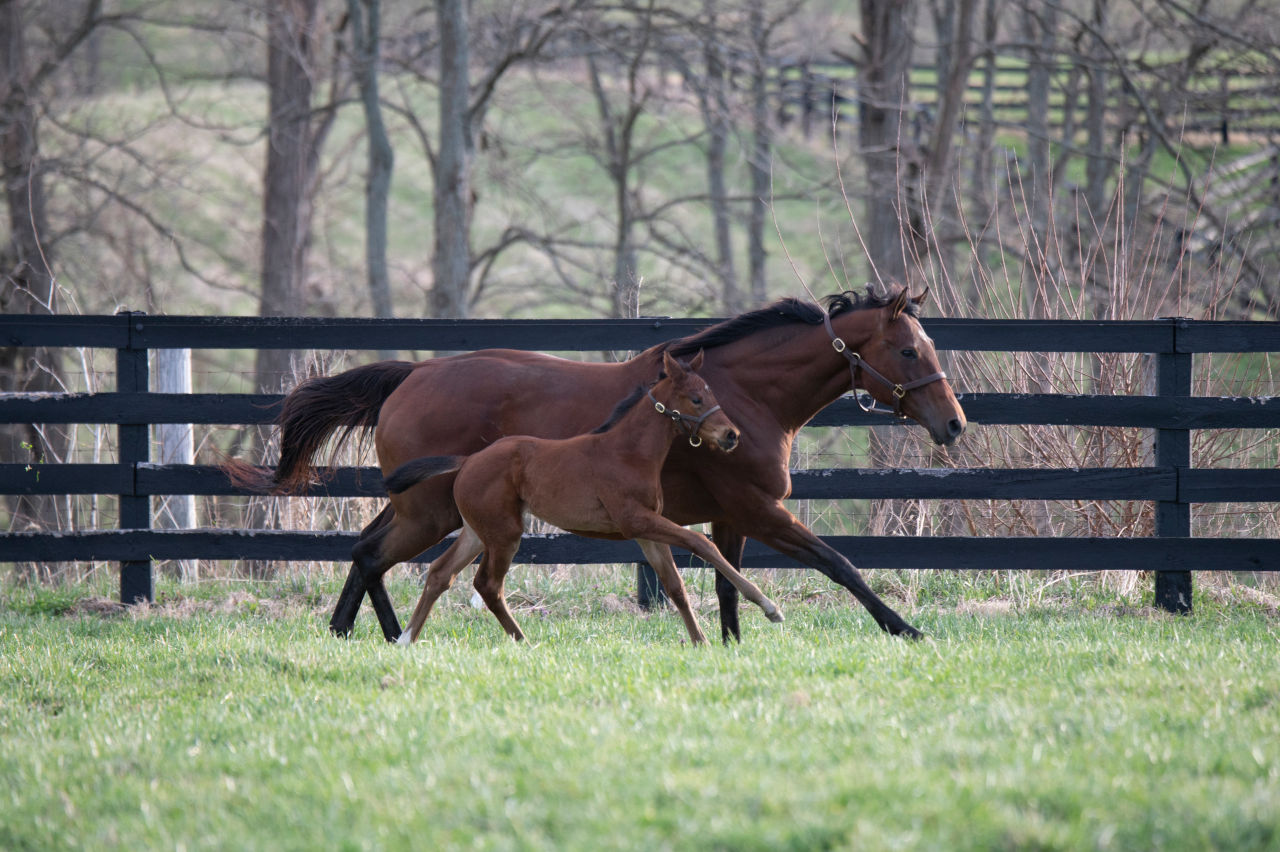 The Nicholasville, Kentucky, farm, on March 4 welcomed the arrival of her latest foal, a filly by Union Rags. She’s already learning to stretch to full stride alongside Simply Confection (as pictured above). The mare’s two-year-old filly by Mendelssohn recently sold for $525,000 at OBS March.

When the time comes for the Union Rags filly to sell, her famous half-brother will loom large on her catalog page.

Photos by Kelcey Loges/Taylor Made 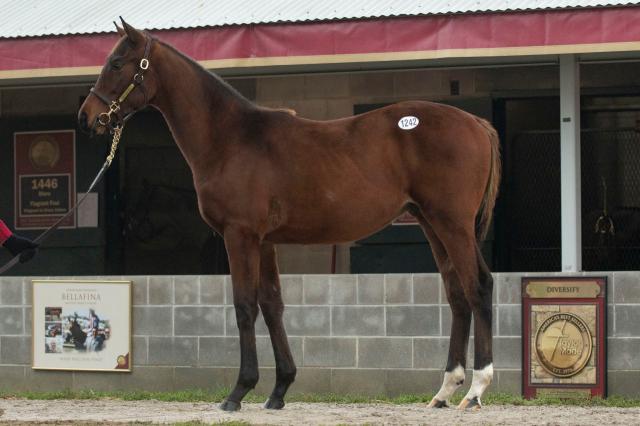