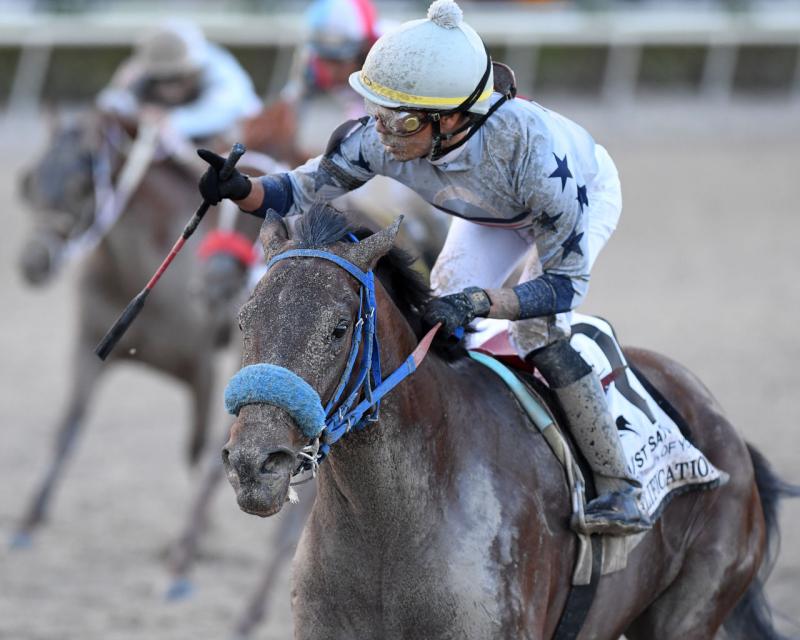 Simplification descends from a full sister to Hall of Famer Ashado (Ryan Thompson/Coglianese Photos)
Simplification became the second major winner on the 2022 Road to the Kentucky Derby for hot young sire Not This Time, after Epicenter.
The two exciting contenders have even more in common, however, than their sire. Both Simplification and Epicenter are out of mares by unbeaten dual-hemisphere star Candy Ride. Thus three-quarters of their ancestry is the same, and their pedigrees differ when it comes to their maternal granddams (second dams).
Since Not This Time and Candy Ride were covered in the “Pedigree fun facts” for Epicenter, we’ll touch upon them here but focus more on exploring Simplification’s female line.
Here are the pedigree fun facts for Simplification:
1. Not This Time offers a “what-might-have-been” for the 2017 Triple Crown trail.
As a 10-length maiden winner who followed up with an 8 3/4-length conquest of the Iroquois (G3), Not This Time went off as the 2.80-1 favorite in the 2016 Breeders’ Cup Juvenile (G1). He didn’t have the smoothest trip at Santa Anita, where a bumpy start arguably cost him better position, and his late rally came up a neck short of Classic Empire. Not This Time never had a chance to gain revenge, since he was diagnosed with a soft-tissue injury shortly after the Breeders’ Cup, and retired to stud.
The success of his progeny on the track only underscores the what-if about Not This Time’s racing career. Had he stayed sound and healthy, how much more would he have achieved – in the Triple Crown and beyond? Not This Time will have to rely on his offspring to pursue classic laurels, and his second crop is looking rosy. After Epicenter romped in the Risen Star (G2), Simplification and In Due Time completed the Fountain of Youth (G2) exacta for their sire.
2. Not This Time is a Giant’s Causeway half-brother to Liam’s Map.
His sire is Giant’s Causeway, the celebrated “Iron Horse” who swept a series of European Group 1s in the summer of 2000, and ranked as an outstanding sire on a global scale. A son of Storm Cat from the Northern Dancer clan, Giant’s Causeway is still adding to his legacy posthumously with his final three foals, led by current Derby contender Classic Causeway.
Not This Time is a half-brother to Liam’s Map, the 2015 Breeders’ Cup Dirt Mile (G1) hero and successful sire in his own right. His top performers include two-time Pegasus World Cup Turf (G1) victor Colonel Liam and Alcibiades (G1) queen Juju’s Map, runner-up in last fall’s Breeders’ Cup Juvenile Fillies (G1).
Liam’s Map and Not This Time are out of the Grade 3-winning Miss Macy Sue, third in the inaugural Breeders’ Cup Filly & Mare Sprint in 2007. 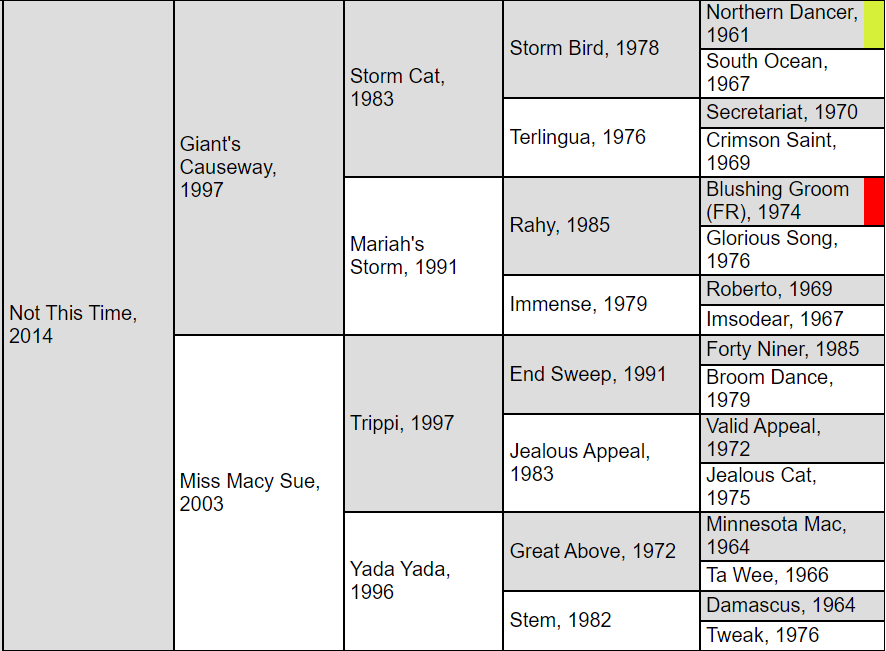 3. Simplification is bred on the reverse of the cross responsible for Gun Runner.

Simplification’s broodmare sire, Candy Ride, is an Argentine champion who has starred stateside, both on the racetrack and at stud. The track record-setting winner of the 2003 Pacific Classic (G1) at Del Mar, Candy Ride has sired such U.S. champions as Shared Belief and Horse of the Year Gun Runner. Shared Belief was out of a mare by Storm Cat, and Gun Runner’s dam is by Giant’s Causeway.

With Not This Time being a son of Giant’s Causeway, it made sense to pursue a similar cross by sending him mares by Candy Ride. The resulting foal’s pedigree would be a mirror image of Gun Runner’s, only with Giant’s Causeway on top and Candy Ride on the bottom. That idea has worked, taking flesh in the form of Simplification and Epicenter.

Simplification is out of Simply Confection, runner-up in the 2014 Rags to Riches S. at Churchill Downs. Ironically, the third-placer that day was Taylor S, an older half-sister to Not This Time, who would later win a stakes and place in the 2015 Forward Gal (G2).

Simply Confection beat a couple of even better rivals in her next start in a Churchill allowance. She drove to a three-length victory over Keen Pauline, the eventual Black-Eyed Susan (G2) winner, and I’m a Chatterbox, a future multiple Grade 1 queen and $2.3 million-earner.

Unlike them, Simply Confection didn’t progress further. Sidelined for more than nine months after a 10th in the Golden Rod (G2), she won only once more and retired with a 15-3-1-2 record and $124,688 in earnings.

5. Simplification’s granddam is a full sister to Hall of Famer Ashado.

Simply Confection was produced by Ballado’s Halo, who placed in a pair of sprint stakes at Turfway Park. But Ballado’s Halo had a trio of far more accomplished full siblings.

Chief among them is Ashado, an earner of more than $3.9 million during her Hall of Fame career. Taking championship honors at both three and four, Ashado captured a total of seven Grade 1s including the 2004 Kentucky Oaks (G1)/Breeders’ Cup Distaff (G1) double.

Two full brothers to Ashado and Ballado’s Halo distinguished themselves as well. Sunriver, third to Barbaro in the 2006 Florida Derby (G1), won the Peter Pan (G2) en route to a third in the Belmont (G1). Finding his home on turf as a four-year-old, Sunriver concluded his career with his signature win in the 2007 Hollywood Turf Cup (G1). Another brother, Saint Stephen, likewise earned his graded laurel at old Hollywood Park in the 2006 Native Diver H. (G3). 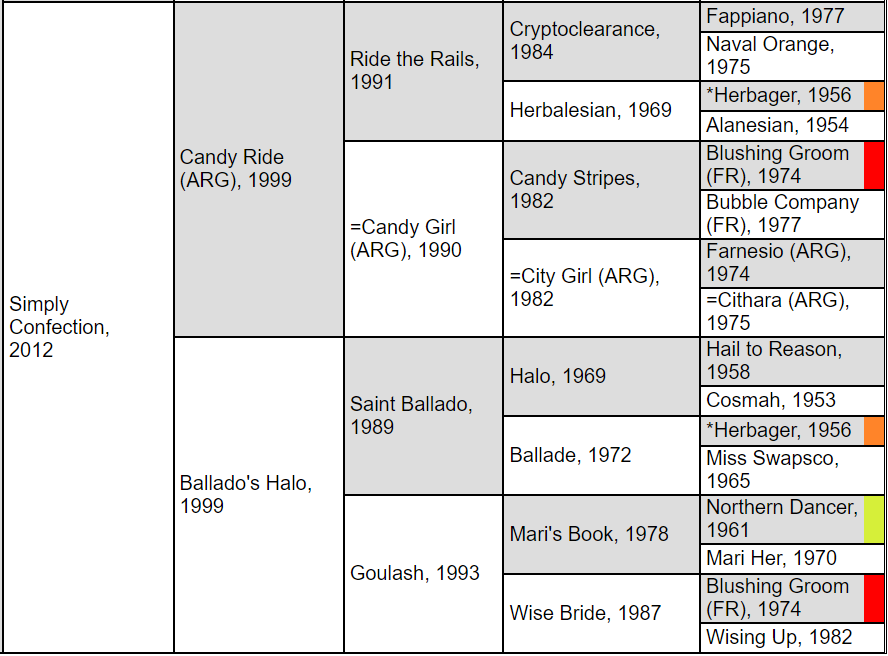 6. Saint Ballado is a full brother to Devil’s Bag and Glorious Song.

Ashado and company are all by Saint Ballado, who was himself in the shadow of two illustrious siblings – Devil’s Bag and Glorious Song.

Devil’s Bag, the unbeaten champion two-year-old colt of 1983, raised hopes of emulating Secretariat after his scintillating season. Alas, that proved unrealistic as he lost his aura of invincibility and retired with a knee injury before the 1984 Derby.

Glorious Song enjoyed more longevity, entering Canada’s Hall of Fame as a three-time Sovereign Award champion as well as the winner of a U.S. Eclipse Award. The first Canadian millionaire, she was honored as her nation’s Horse of the Year in 1980. Glorious Song continues to exert an influence in pedigrees, especially through her sons Singspiel and Rahy (who factors as the broodmare sire of Giant’s Causeway).

Saint Ballado couldn’t match their racing exploits, with his highlights coming in the 1992 Arlington Classic (G2) and Sheridan (G3) at Arlington Park. But he emerged as an important sire. Aside from Ashado, Saint Ballado is responsible for 2005 Horse of the Year Saint Liam, and he is also the broodmare sire of champion Lady Eli.

Devil’s Bag, Glorious Song, and Saint Ballado are all by Halo, sire of two Kentucky Derby winners – Sunny’s Halo (1983) and Sunday Silence (1989), the Hall of Famer turned supersire – and out of the blue hen Ballade.

Because Glorious Song (through Rahy and his grandson Giant’s Causeway) appears in the pedigree of Not This Time, and Saint Ballado is prominent on Simplification’s maternal side, his pedigree sports the “Rasmussen Factor” of doubling up on a superior female. In this case, it’s duplicating Glorious Song and Saint Ballado’s dam, Ballade. (Ballade’s sire, French champion *Herbager, also makes an extra appearance of his own in the pedigree of Candy Ride.)

Another instance of the Rasmussen Factor occurs in the pedigree of Ballado’s Halo. Her dam, Goulash, is inbred to Broodmare of the Year Cosmah (here appearing as the dam of Halo and Maribeau). Perhaps that’s one reason why Goulash, the winner of a minor sprint stakes at Fairplex and near-misser in the 1996 Linda Vista H. (G3) at Santa Anita, ended up becoming a significant producer.

Goulash’s sire, Mari’s Book, is closely inbred to Almahmoud (granddam of Northern Dancer and dam of Cosmah). Perhaps that’s why this otherwise unremarkable stallion is also the broodmare sire of $3.2 million-earners Congaree and Behrens.

Goulash’s dam, Wise Bride, is by the influential Blushing Groom, who turns up no fewer than three times in Simplification’s ancestry. A French champion and classic-winning miler, Blushing Groom also factors as the sire of Rahy and in the pedigree of Candy Ride.

Wise Bride is out of Wising Up, the winner of the 1985 Santa Ynez (G3) for D. Wayne Lukas when her future Hall of Fame stablemate, Lady’s Secret, was fifth. Wising Up placed in a pair of Grade 1s, including the 1984 Hollywood Starlet (G1) to Outstandingly and Fran’s Valentine. Her sire, Smarten, is also responsible for Canadian champion Classy ‘n Smart (now better known as the dam of Smart Strike and Dance Smartly).

9. Simplification traces to the same tap-root ancestress as Shut Out.

This female line belongs to the family labeled 16-g, the same tribe as 1942 Kentucky Derby, Belmont, and Travers hero Shut Out. Their common ancestress is Polly Agnes, a British mare foaled in 1865.

Simplification and Shut Out descend from full sisters – Tiger Lily and Lizzie Agnes, respectively. Both daughters of Polly Agnes were sired by Macaroni, hero of the 2000 Guineas and Epsom Derby in 1863.

Thus Tiger Lily and Lizzie Agnes were also full sisters to the high-class stayer and superb broodmare Lily Agnes, who founded her own distinct family (16-h) through such offspring as *Ormonde, the unbeaten English Triple Crown winner of 1886, and Ornament, dam of four-time English classic heroine Sceptre. 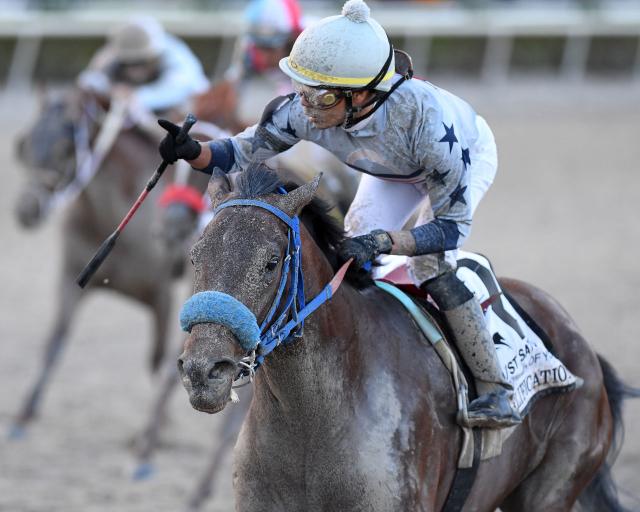