Tales from the Crib: White Abarrio 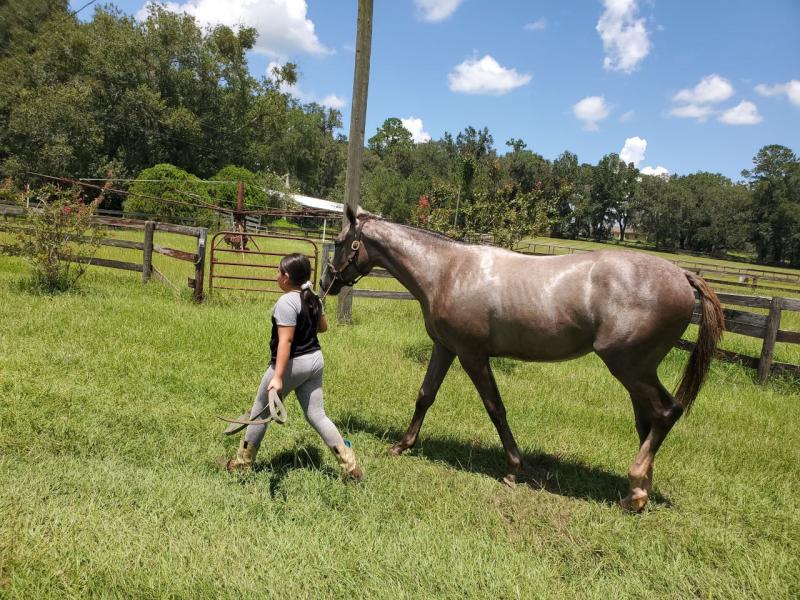 White Abarrio formed a great bond with Alisson Herrera (Photo courtesy of Edilberto Herrera)
As a young gray colt stood in the ring at the Ocala Breeders’ Sales Company’s Winter Mixed Sale in January 2020, few took any interest. His sire was finding it difficult to establish himself in the ultra-competitive stallion market, and he was the first foal of a mare who failed to place in three starts.
Yet Edilberto Herrera saw something in the newly-turned yearling. He partnered with his uncle, Jose Ordonez, to buy the colt for $7,500. That bargain-basement purchase turned out to be White Abarrio.
“The day I bought him, I knew he was going to be a good horse,” Herrera said. “He always had a good attitude.”
The colt formed a bond with Herrera’s daughter, Alisson.
“He was the nicest horse. My daughter loved him. She would bathe him and would go get him where he was. He loved my daughter.” 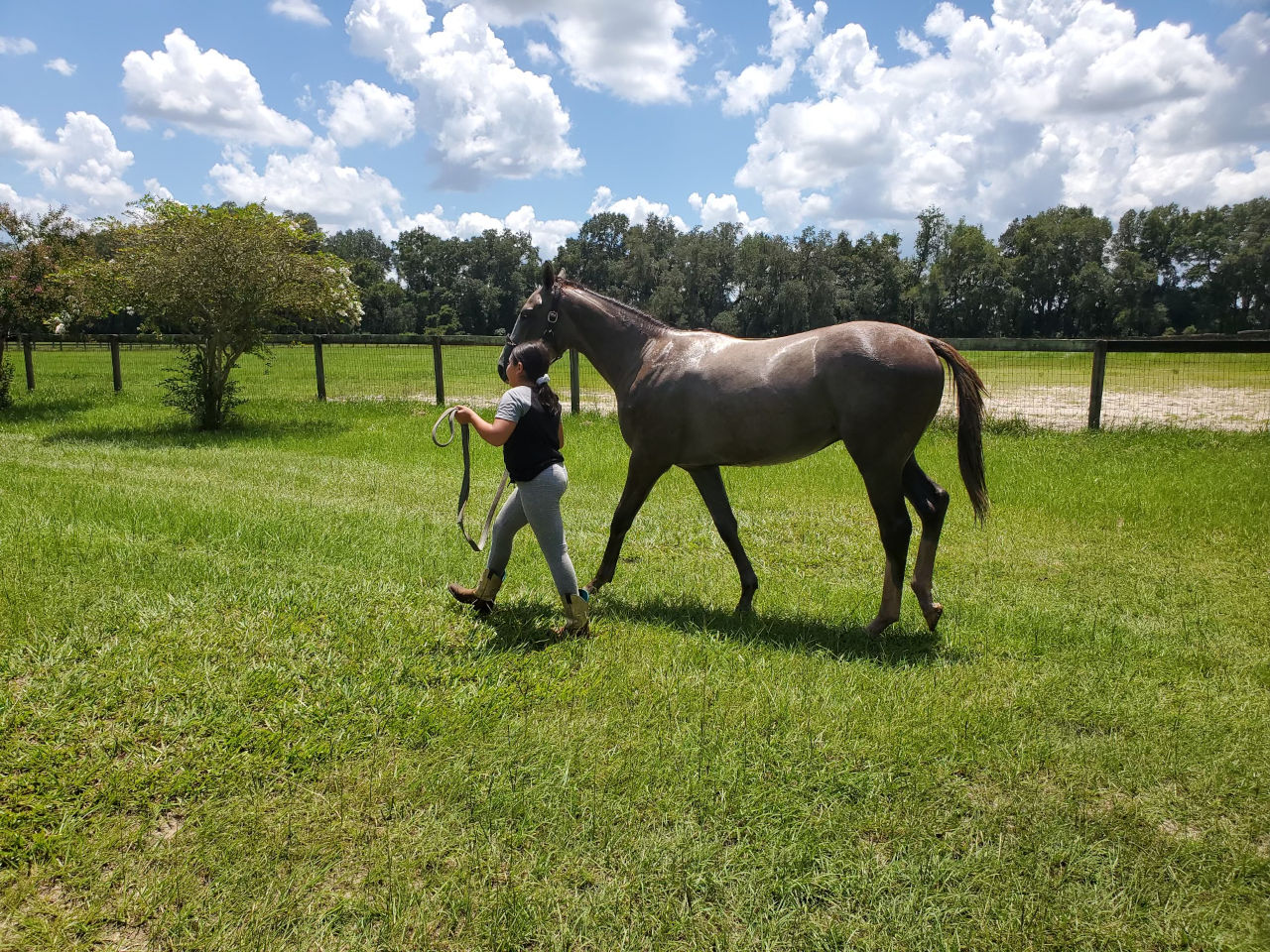 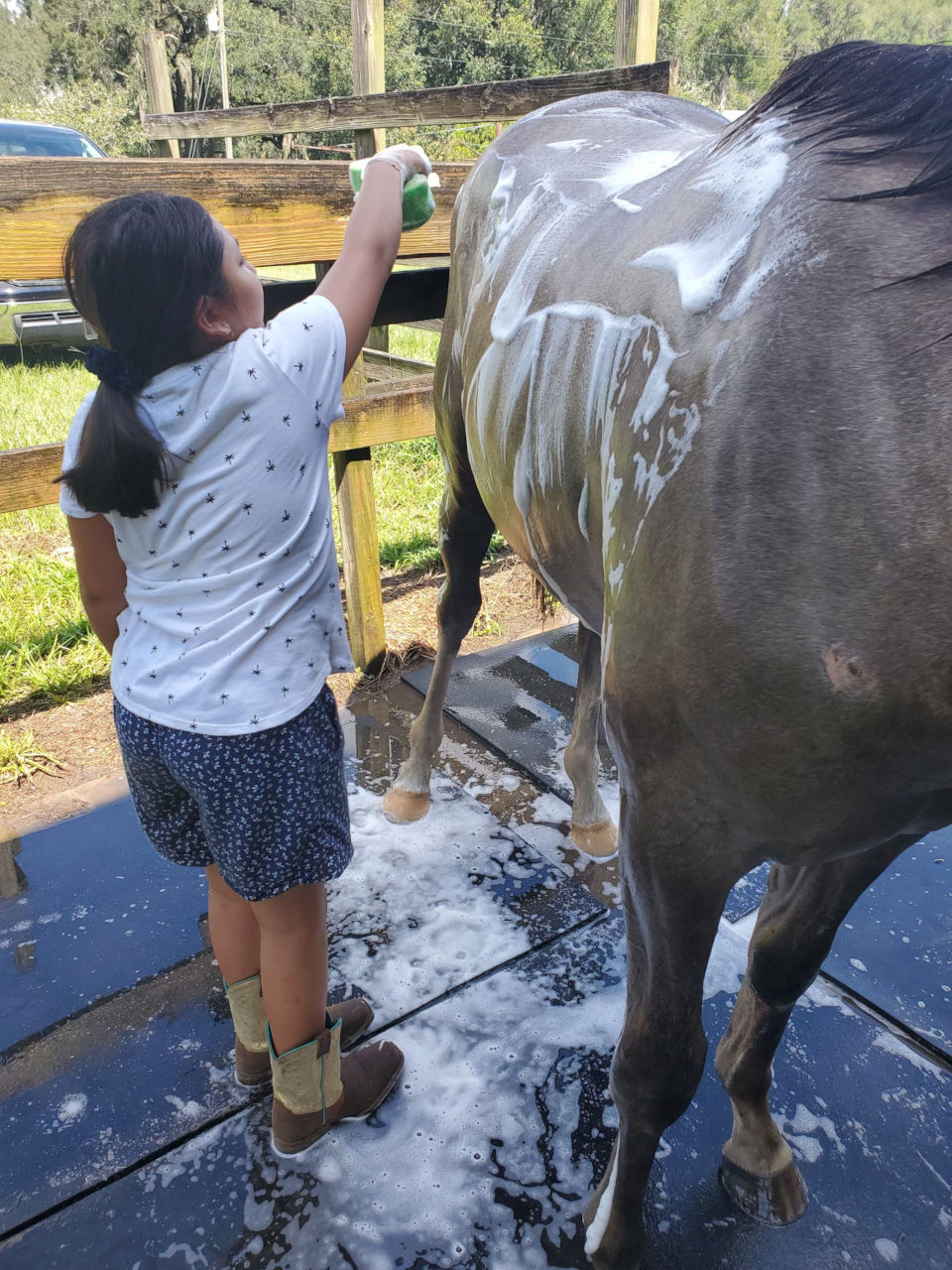 “My daughter had a nickname for him, bato loco, because I bought three at the same time. So she called them the tres batos locos – after a movie with guys they called the ‘three crazy dudes.’”

The other two “dudes,” however, deferred to White Abarrio.

“He was always the leader,” Herrera noted. “The others would know who was the boss. They would run from him.” 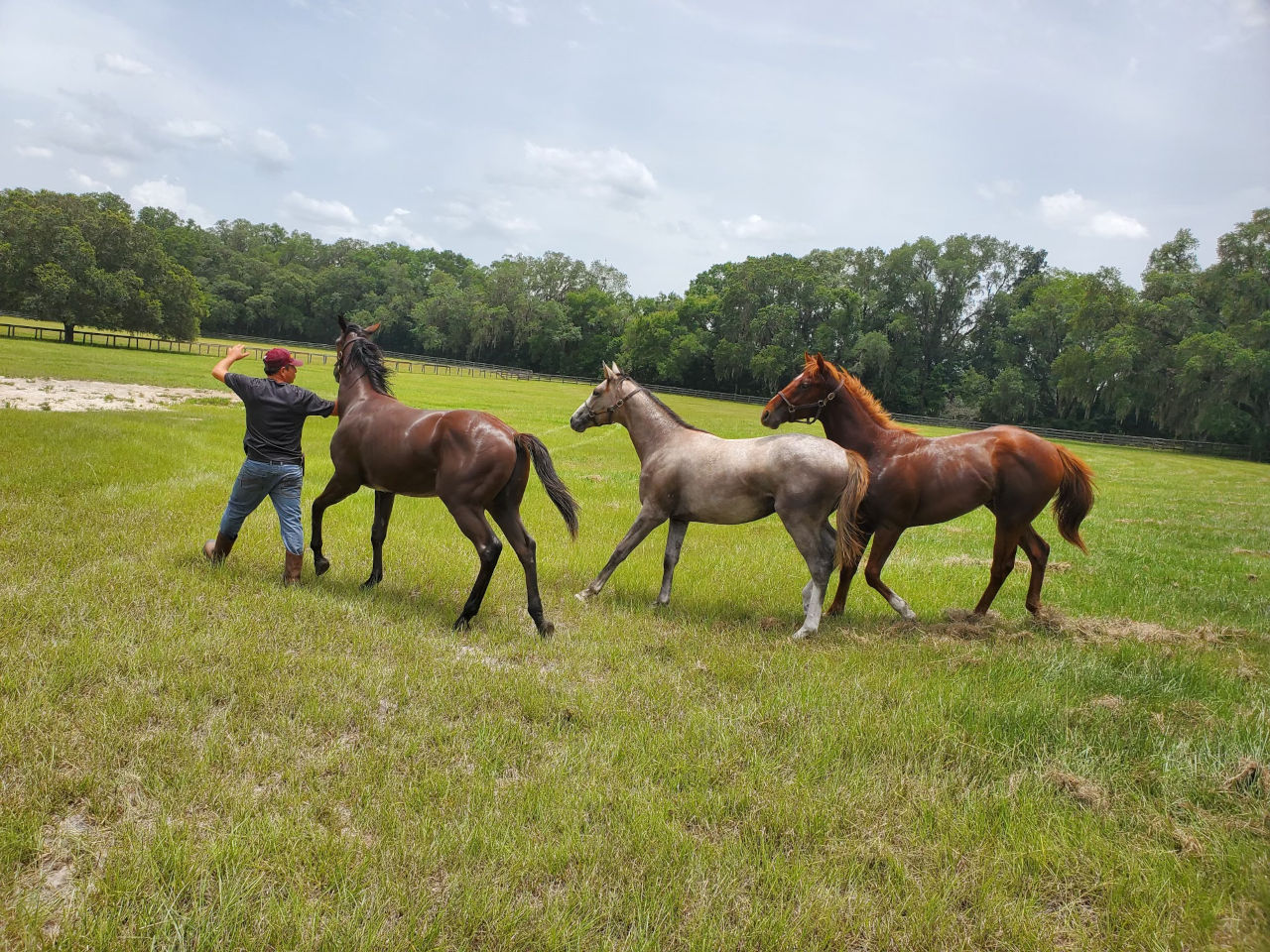 The yet-unnamed youngster developed well under Herrera’s tutelage. Indeed, Herrera took care of White Abarrio through that key period of formation, in preparation for resale at two. Teaching him his lessons through the breaking and training process, Herrera was also his groom and rider.

“His training was always very nice. I rode him every time, and he would always get better and better each time. He was a great horse.

“I loved the way he ran all the time. When I would ask him for more, he’ll give me more and more.” 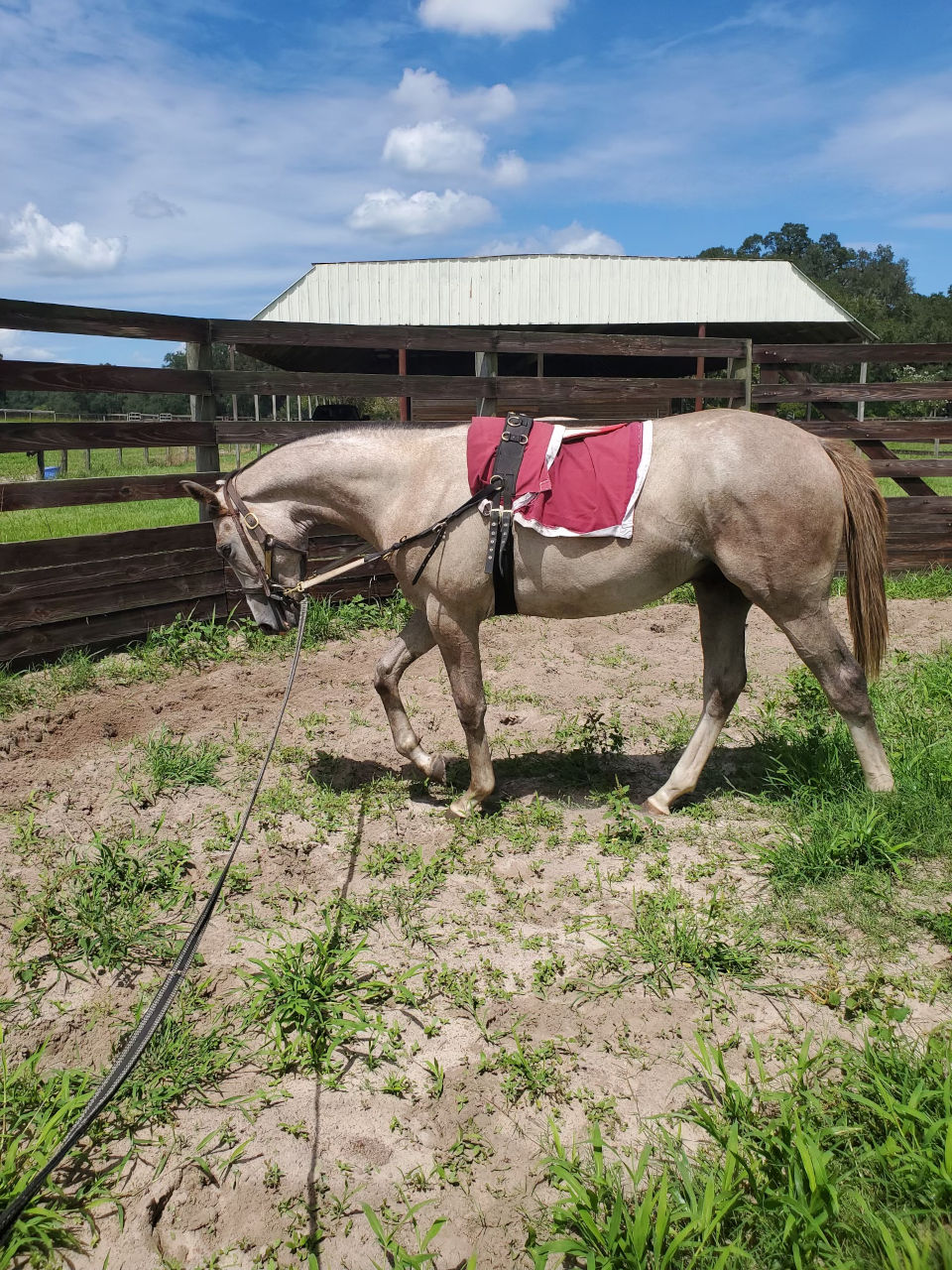 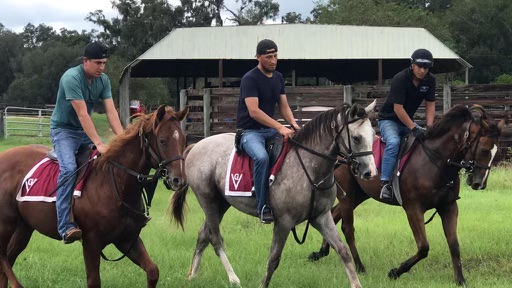 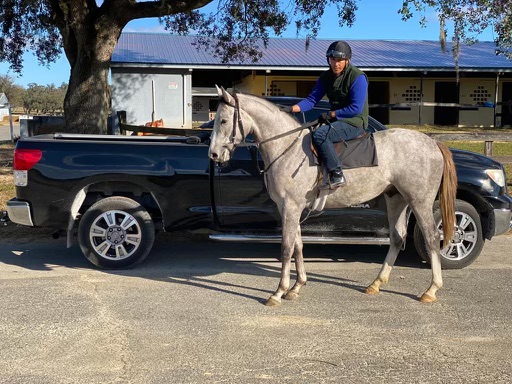 White Abarrio might have lacked commercial appeal, but he hailed from one of the great Kentucky nurseries – Spendthrift, established in 1937. He is one of two Spendthrift-breds in this year’s Derby, along with Tiz the Bomb, who sold for a much higher $330,000 as a Fasig-Tipton yearling.

Spendthrift founder Leslie Combs II, a descendant of the influential 19th-century horseman Daniel Swigert, evoked his heritage by naming the farm after one of Swigert’s headliners. The equine Spendthrift, the 1879 Belmont winner, would become the paternal great-grandsire of Man o’ War.

The farm fell from that pinnacle in ensuing decades, but its fortunes were revived after the late B. Wayne Hughes acquired the property in 2004. Spendthrift is once more a renowned stud farm, with leading sire Into Mischief topping the roster. Now standing alongside him is his 2020 Kentucky Derby-winning son, Authentic, who also raced for Spendthrift in partnership.

Into Mischief is also the broodmare sire of White Abarrio. Spendthrift paid $425,000 for his dam, Catching Diamonds, as a yearling at Keeneland September. She was a desirable commodity as an Into Mischief half-sister to Cool Cowboy, a sprinter/miler sporting notable victories in both the U.S. and Dubai. But she failed to live up to her pedigree on the track.
White Abarrio’s sire, Race Day, was himself a well-bred son of leading sire Tapit who won three graded stakes as an older horse. Yet when he didn’t come up with a breakout performer in his first two crops, Race Day was eventually exported to Korea.

Such was the market coolness toward a Race Day colt. Still, White Abarrio had progressed by the time of his next auction appearance, back at OBS as a March juvenile. Consigned by Herrera’s Nice and Easy Thoroughbreds, he worked a furlong in :10 2/5 and sold for more – $40,000 to trainer Carlos Perez.

Subsequently named White Abarrio, the two-year-old made an impressive debut Sept. 24 at Gulfstream Park. The 12-1 chance outperformed his odds, and defied a potentially tough rail post for a first-time starter, to romp by 6 3/4 lengths.

That caught the attention of Mark Cornett, who’s been involved with such champions Blind Luck (the 2010 Kentucky Oaks [G1] winner) and Dubai Majesty. He and his brother Clint – together, C2 Racing Stable – worked out a deal to purchase White Abarrio privately, with La Milagrosa Racing Stable retaining an interest in the colt.

Switched to trainer Saffie Joseph Jr., White Abarrio furnished quick dividends on the investment. He stepped up from 6 1/2 furlongs to a mile in an Oct. 29 Gulfstream allowance and went wire to wire.

White Abarrio shipped to Churchill Downs for the Kentucky Jockey Club (G2), his first try on the Road to the Kentucky Derby as well as around two turns. The 1 1/16-mile test turned into a learning experience, as he didn’t get the cleanest trip. By the time he had room to rally, Smile Happy was long gone, and White Abarrio checked in an improving third.

Back at his Gulfstream home base, it would be a different story. Joseph thought that White Abarrio wasn’t fully primed for the Feb. 5 Holy Bull (G3), since an illness had interrupted his planned training schedule. But a healthy White Abarrio proved plenty sharp enough, rolling from a pace-prompting position to score by 4 1/2 lengths. There was a sense of déjà vu ahead of the Florida Derby (G1), as White Abarrio briefly came down with a fever that postponed his final work. That didn’t matter either, for White Abarrio again asserted himself from just off the pace in a driving victory.

Joseph had to adjust his last major move for the Kentucky Derby as well, this time because of the Florida weather. A deluge left Gulfstream sloppy this past Saturday morning, and the trainer preferred to work in better conditions. The track was in good shape later in the afternoon, and White Abarrio was able to get in his drill before the day’s last race on the card. Signaling his well-being, the gray turned in a strong half-mile in :48.28, then kept motoring through a superb gallop-out.

Now White Abarrio returns to Churchill, the scene of his only career loss, with an enhanced resume. He has plenty of supporters on his bandwagon, a far cry from that January day as an undervalued sales yearling. You might say that this son of Catching Diamonds was a diamond in the rough for Herrera and his family, and Alisson is excited to see her bato loco run for the roses. 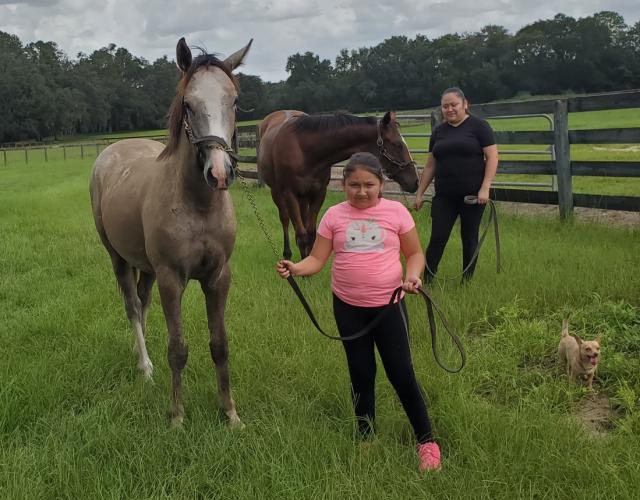