The Fountain of Youth (G2) at Gulfstream Park will guarantee the winner a spot in the Run for the Roses, awarding a 50-point prize as a Road to the Kentucky Derby series qualifier, and Simplification continued his rise in the three-year-old ranks with a convincing win.

Simplification relaxed perfectly in midpack during the opening stages, rallied wide on the far turn to challenge for the lead turning for home, and drove to a 3 1/2-length decision. Trained by Antonio Sano and ridden by Javier Castellano, the Florida-bred colt left the starting gate as the 5-2 favorite.

His final Kentucky Derby prep will be the $1 million Florida Derby (G1) on April 2.

A wire-to-wire winner of the Mucho Macho Man S. over a one-turn mile on New Year’s Day, Simplification had distance questions when stretching out to two turns in the Feb. 5 Holy Bull (G3). The expected frontrunner appeared to lose all chance when missing the break, but Simplification rallied determinedly for second.

He’s become versatile while improving at two-turn distances. Simplification didn’t switch leads in the short stretch at the 1 1/16-mile distance, which isn’t optimal, but he still won going away. His pedigree fits for classic distances – the bay sophomore is by Not This Time, a son of Giant’s Causeway and also the sire of Kentucky Derby contender Epicenter, and Simplification is out of a mare by Candy Ride, the sire of Horse of the Year Gun Runner.

In Due Time forced his way through horses nearing the completion of the far turn, bumping another rival and starting a chain reaction that resulted in High Oak clipping heels and falling. Galt couldn’t avoid the fallen horse and dislodged Joel Rosario.

Both horses returned to the barn okay, according to connections. Joel Rosario and Junior Alvarado, High Oak’s rider, were battered and bruised, but they reportedly weren’t seriously injured.

In Due Time wound up a clear second, and the stewards found no reason for disqualification after reviewing the incident. Gulfstream announced Wednesday that his rider, Paco Lopez, has been suspended 14 race days for careless riding.

The suspension may be warranted, but the lack of a disqualification makes no sense.

Simplification received a 95 Brisnet Speed rating winning the Fountain of Youth. By comparison, Forbidden Kingdom earned a 102 rating and Morello a 99 figure for their respective wins in the San Felipe (G2) at Santa Anita and Gotham (G3) at Aqueduct on the same afternoon.

We’ll see what happens in the Florida Derby, but the Speed ratings at Gulfstream haven’t been strong this year. 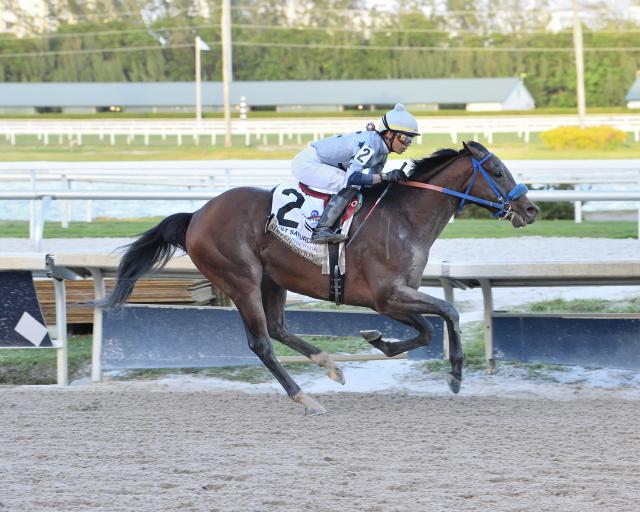