Trained by Saffie Joseph Jr. and ridden by Tyler Gaffalione, the 6-1 chance was perched in second as 19-1 shot Galt emerged as the surprising leader. That role was expected to be played by Simplification, but he fluffed the start, changing the whole race dynamic from the gate.
Recent maiden winner Galt, better known as a full brother to champion Songbird, was graduating into one of the Derby trail’s deepest preps so far. As he set the pace with the prompting presence of White Abarrio on his flank, it was only a matter of time until he was overwhelmed.

White Abarrio made his move on the far turn, put the race away in a few strides, and opened up by 4 1/2 lengths. Completing 1 1/16 miles in 1:42.80, the gray added 10 points on the Road to the Kentucky Derby. He now has a total of 12, including the two from the Kentucky Jockey Club.

“It was an ideal trip,” Gaffalione said. “The horse broke sharply and put me where I wanted to be. He settled nicely on the backside and when I called on him, he gave me another gear and finished the job well.
“I don’t think distance is going to be a problem. He was just hitting his best stride down the lane and, galloping out, I had a really difficult time pulling him up. I was calling for the outrider.”
Simplification did his best to recover once totally out of his game. Working his way forward from far back, Simplification gave game chase through the stretch to bank four points.
Mo Donegal, the 1.70-1 favorite as the Remsen (G2) winner, kicked into gear belatedly in third. A head shy of catching Simplification, Mo Donegal earned two Derby points to bring up his tally to 12.
Galt soldiered on to receive one point in fourth, followed by Cajun’s Magic; Spin Wheel; the two coming out of Breeders’ Cup races, Tiz the Bomb and Giant Game; and Eloquist.
C2 Racing Stable and La Milagrosa Stable’s White Abarrio has compiled a record of 4-3-0-1, $240,850. He won his first two starts at Gulfstream before stepping up in class and trip for the Kentucky Jockey Club, where he had to wait for room but finished well in third. White Abarrio is its second alum to move forward next time out and score in a Road to the Derby event, after Call Me Midnight, the seventh-placer in the Kentucky Jockey Club, came back to upset the Lecomte (G3).
Joseph mentioned that White Abarrio’s preparation for the Holy Bull was interrupted by a brief illness in the interim.
“It was a big performance,” his trainer said. “We were ahead of schedule all the time and then he got sick and we missed two works. We ended up going from being ahead of schedule to being behind. Quality horses overcome those things.”
Bred by Spendthrift Farm in Kentucky, White Abarrio brought just $7,500 as an OBS January yearling, but appreciated to $40,000 as a March two-year-old at the same venue. He is by the Tapit stallion Race Day and out of Catching Diamonds, an Into Mischief half-sister to multiple Group 3 winner Cool Cowboy.
Forward Gal 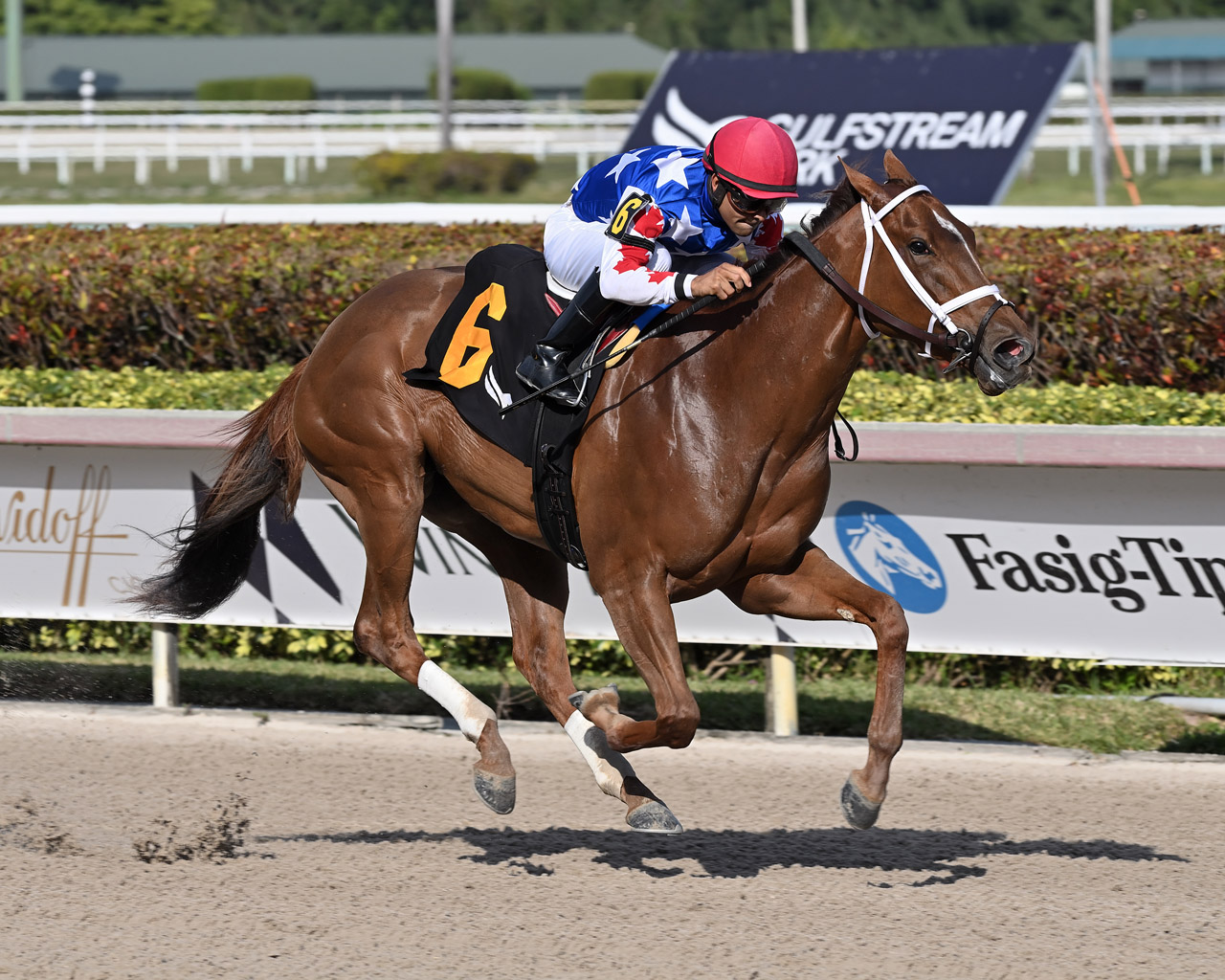 Earlier at Gulfstream, Jim Bakke and Gerald Isbister’s Girl With a Dream sped to 10 Kentucky Oaks points in the Forward Gal (G3). But runner-up Radio Days, the beaten 3-5 favorite, could be the one to advance further on the Oaks trail.

Sent off as the 5.40-1 third choice, Girl With a Dream leaned inward in the opening strides and herded Radio Days into Disco Ebo. Hitherto unbeaten Radio Days was going to race off the pace anyway, but her spot of trouble might have put her further back.
Meanwhile, Girl With a Dream had too much pace for her rivals in the seven-furlong test. The Brad Cox trainee grabbed the early lead and began to open up turning for home.

By that point, Radio Days was rallying to become the only threat. The daughter of Gun Runner stayed on steadily to reduce the winner’s margin to one length. Picking up four Oaks points in her stakes debut, Radio Days promises more as the distances increase.

At this trip, though, Girl With a Dream’s speed was decisive.
“She broke from there pretty sharp,” winning rider Luis Saez said. “She went and she was pretty comfortable all the way. We came to the top of the stretch and I felt like I had a lot of horse.
“I felt like every step when the other filly came close to her, she responded more.”
There was a 6 1/4-length gap back to 60-1 longshot Last Leaf, who took home two points in third. Diamond Wow faded to fourth after chasing Girl With a Dream, good for one point. Next came Greatitude, She’s So Beautiful, and Disco Ebo.
Girl With a Dream clocked 1:23.42 to extend her winning streak to three, following a front-running victory in the Dec. 27 Letellier Memorial at Fair Grounds and a last-to-first coup in a Churchill Downs allowance Nov. 13. Her resume now reads 6-4-1-0, $231,480. Her only unplaced effort was a rough-trip eighth behind presumptive champion Echo Zulu in last summer’s Spinaway (G1).
Bred by Machmer Hall and D + J Racing Stable in Kentucky, Girl With a Dream sold for $115,000 as a Keeneland September yearling. She is from the first crop of the Into Mischief stallion Practical Joke, and her dam, the Corinthian mare Henley, is a half-sister to multiple Grade 2 hero Mr. Commons.