Three Takeaways from the Florida Derby

The March 28 Florida Derby (G1) at Gulfstream Park served as a major qualifier for the Kentucky Derby, which has been rescheduled for Sept. 4, and Tiz the Law jumped to the top of the Leaderboard with the 100-point prize.

Here are three takeaways from the Florida Derby:

Tiz the Law made short work of his Florida Derby rivals, drawing off sharply in upper stretch to score by a facile 4 1/4 lengths, and I came away impressed by his behavior. He didn’t steady in traffic, or suddenly drift in during the stretch drive, like his previous four starts.

When Ete Indien cut over in front of him approaching the first turn, Tiz the Law did not get frustrated. Instead, the New York-bred son of Constitution settled perfectly beneath Manny Franco for an up-close stalking trip behind a moderate early pace, waiting for his cue to strike, and finished full of run while stretching out to 1 1/8 miles for the first time.

Tiz the Law couldn’t match the whopping 108 Brisnet Speed rating from his convincing Holy Bull (G3) triumph, but did reach the triple-digit threshold (100).

2 – Clear leader outside of California.

Pool 4 of the Kentucky Derby Future Wager will be offered this weekend, and Tiz the Law is the likely favorite among individual interests following his smashing Florida Derby win. The next four probable betting choices are based in California, with the Bob Baffert trio of Authentic, Charlatan and Nadal; and San Felipe (G2) runner-up Honor A. P.

Tiz the Law versus the California contingent would have been a compelling storyline on the first Saturday in May, and we’ll see if it continues to hold over the four-month delay to the 146th Kentucky Derby.

A pair of top contenders, Ete Indien and Independence Hall, had proved spectacular at middle distances, but they exited the Florida Derby looking poorly suited for the 1 ¼-mile Kentucky Derby trip.

Ete Indien, the 5-2 second favorite, didn’t make an easy lead like in his 8 1/2-length Fountain of Youth (G2) win, and after disposing fellow front-runner Shivaree nearing the conclusion of the far turn, he could not hold second as Shivaree re-rallied past him in the stretch.

Independence Hall, the 3-1 third choice, advanced into a threatening position before coming up empty in the final furlongs, weakening to be a well-beaten fifth. 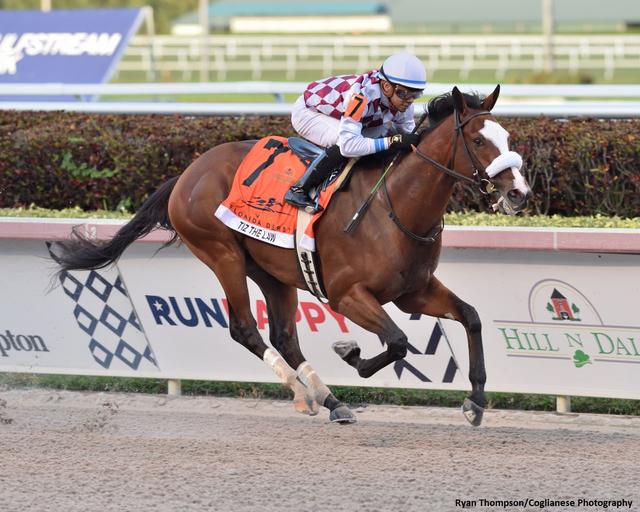