The Japan Road to the Kentucky Derby heats up again in the Hyacinth S. at Tokyo Sunday (late Saturday night, 12:25 a.m. EST). With its enhanced 30-12-6-3 points structure, the metric mile test will yield significant changes on the Japan Road leaderboard.

Derma Louvre comes off a terrific near-miss to Nova Lenda in the second Japan Road event, the December 19 Zen-Nippon Nisai Yushun at Kawasaki. Shuffled back in tight quarters early, he flew home late and came up a head short. The son of American dirt star Pyro previously compiled a three-race winning streak, including romps in a Nakayama maiden and the Hyogo Junior Grand Prix at Sonoda. In between, Derma Louvre showed a brave attitude to overcome traffic in his allowance score at Tokyo. Top jockey Christophe Lemaire, three-for-three aboard Derma Louvre, hopes to keep their partnership perfect.

Make Happy suffered her first career loss in that Zen-Nippon, where she lacked her typical spark in fourth. It was also her first start away from Tokyo. The $650,000 California-bred daughter of Square Eddie had looked like a different animal in her first two outings here, crushing the boys in a newcomers’ event October 7 as well as in the first scoring race, the November 24 Cattleya Sho. Make Happy rates a rebound candidate back at this track and trip with new rider Mirco Demuro. She is drawn in post 4, one spot outside of Derma Louvre.

Master Fencer brings a two-for-two mark on dirt after starting his career unsuccessfully on turf. His wins came at about 1 1/8 miles at Hanshin and Kyoto, and now he cuts back in trip while stepping up in class. Yasunari Iwata picks up the mount aboard Master Fencer on the rail.

The unbeaten pair of Weitblick and Oval Ace are major threats. Weitblick, a well-bred son of Symboli Kris S, distanced his rivals first out at Kyoto and rolled by three at Nakayama. He too shortens up from about nine furlongs. Oval Ace is by Beholder’s sire Henny Hughes. A nine-length debut romper at this course and distance, he followed up in an allowance at Chukyo last time.

Godolphin’s homebred Pyro filly, Orthographe, won her first two at Niigata and Kyoto but was second best behind Derma Louvre in the Hyogo Junior Grand Prix. Yet another filly in the Hyacinth, R Rosso, is a neck away from being unbeaten. Since narrowly dropping her debut, she’s posted half-length wins in a Chukyo maiden and Hanshin allowance.

Nanyo Izayoi, most recently victorious in a Hanshin allowance, had earlier placed to R Rosso and Derma Louvre. Although Imeru has been consistent on turf, never finishing worse than fourth, he has yet to build on his maiden score at Hanshin. The move to dirt may help the son of Japanese champion Kinshasa no Kiseki. Miyake is exposed with a 1-for-9 record, but he was third in the Hokkaido Nisai Yushun in his lone dirt try.

Here is the field in post position order (screenshot from japanracing.jp): 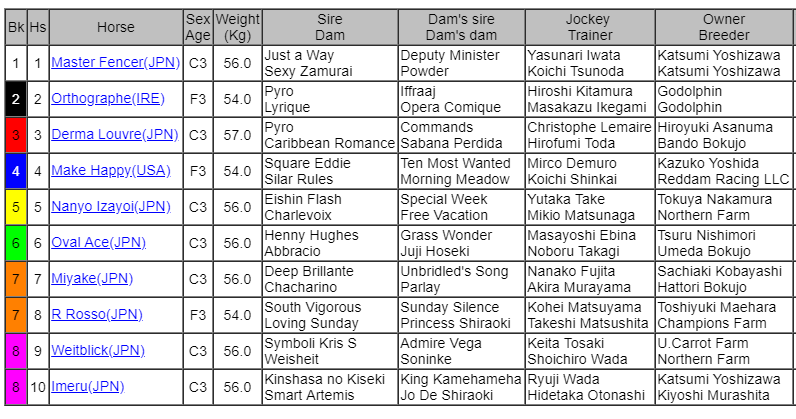 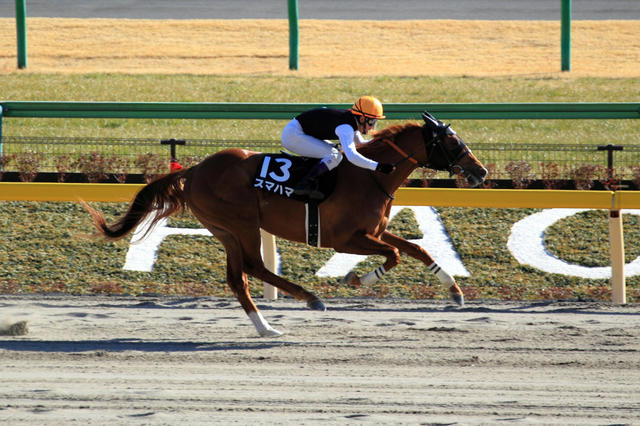