Under the Stars repels every challenge in Santa Ynez 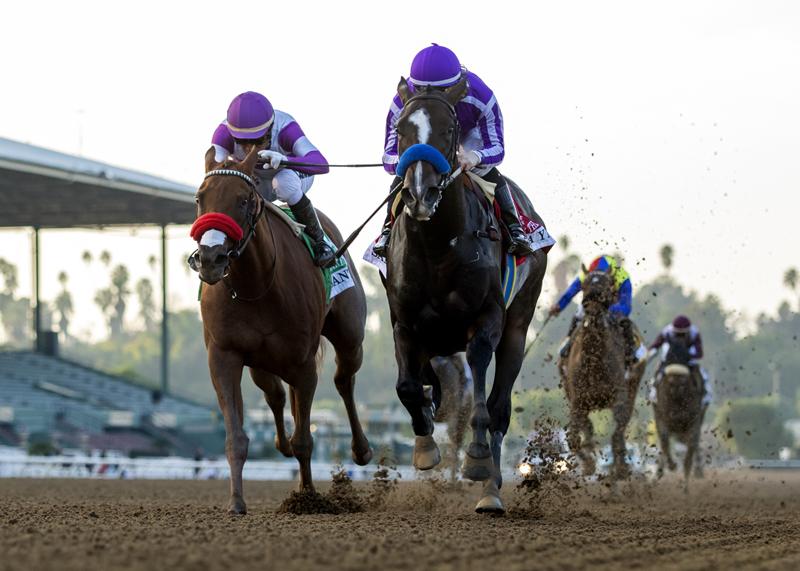 Sent off as the 9-10 favorite off a sharp maiden win, Under the Stars posted a gutsy, front-running score in Saturday’s $200,500 Santa Ynez (G2) at Santa Anita. The three-quarter sister to 2012 Kentucky Derby (G1) runner-up Bodemeister did him proud by flashing high speed and repelling all comers.

Under the Stars had employed different tactics at Los Alamitos last out, when swooping from just off the pace. But drawing the rail in the Santa Ynez necessitated a more forward running style, and the Bob Baffert trainee adapted by breaking like a shot from the gate.
With Flavien Prat aboard, Under the Stars vied early with Miss Mattie B. Big Shamrock added to the pressure, racing between them before dropping back.
Under the Stars put Miss Mattie B away entering the stretch, only to find her most serious challenger yet loom up – Awake at Midnyte, who beat her on debut. A daughter of 2016 Kentucky Derby champ Nyquist, Awake at Midnyte rallied at the top of the lane and appeared to have enough momentum to go by.
But Under the Stars responded, found more, and fended her off by three-quarters of a length in a final time of 1:22.51 for seven furlongs. Although the Santa Ynez is a scoring race on the Road to the Kentucky Oaks, Under the Stars is ineligible for points because Baffert is suspended by Churchill Downs Inc.
Awake at Midnyte, trained like sire Nyquist by Doug O’Neill, received four points for her runner-up effort. Miss Mattie B took home two points by finishing another 6 1/2 lengths back in third. Big Switch, a remote fourth as the 17-10 second choice, opened her account with one point. Next came Big Shamrock and Mimajoon, who was eased after stumbling, but walked off.
Campaigned by Mrs. John Magnier, Michael Tabor, and Derrick Smith, Under the Stars boosted her bankroll to $170,520 from a 4-2-0-2 record. The bay was third to stablemate Eda in the Nov. 13 Desi Arnaz S. at Del Mar before breaking her maiden.
Under the Stars is by Pioneerof the Nile and out of the Grade 3-winning Storm Cat mare Untouched Talent. Aside from Bodemeister (by Pioneerof the Nile’s sire, Empire Maker), Untouched Talent is also responsible for multiple Grade 1-placed Fascinating (by Smart Strike) and stakes-placed Himiko (by Pioneerof the Nile’s son American Pharoah). Her two most recent foals, a newly-turned two-year-old and yearling, are colts by 2018 Triple Crown star Justify.